I SAW THE SIEGE: ‘You’re There, You’re In The Heart Of It So It Felt So Unreal’ 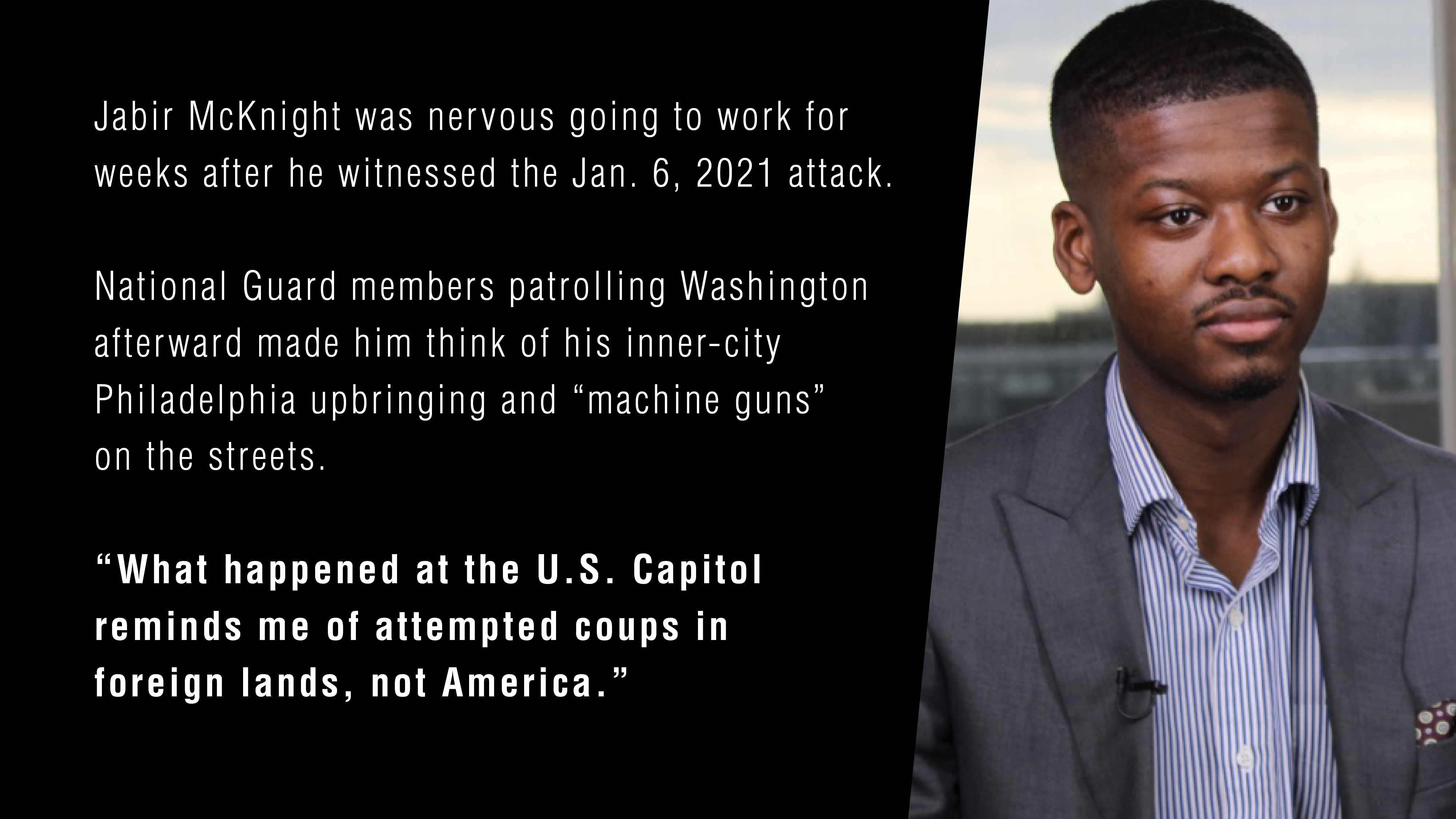 “We knew that this was coming, but it was a very shocking moment when the Capitol was actually breached,” Jabir A. McKnight says of the Jan. 6, 2021 riot that has now led to more than 100 arrests.

McKnight had a problem that morning: A trusted mentor cautioned him to work from home but his boss, a Democratic member of Congress, expected him to be at the U.S. Capitol, shadowing her. Electoral College votes would be counted and Joseph R. Biden Jr. would be on his way to the White House, but Republicans had threatened to contest the votes from several states. Supporters of then-President Donald J. Trump were expected to protest. It might get ugly and he would be in the thick of it.

“The first thing I said when I woke up in the morning was, ‘I don’t know if I should go in,’ but I did,” McKnight says. “As I went in around noon I was walking through the Capitol grounds. There were maybe a few hundred protesters scattered.” A few hours later, after Trump spoke at a rally near the White House, the mood shifted. Congressional skeleton crews who weren’t working via Zoom got text messages: Shelter in place, stay in your offices. “You’re there, you’re in the heart of it so it felt so unreal,” says McKnight.

“Then we got an alert that there was a pipe bomb found outside that Cannon office [building], and that was shocking. I’m like, ‘Wow.’”

McKnight is a communications director in the House of Representatives, wrangling journalists for Rep. Sheila Jackson Lee (D-Texas), one of 27 African-American women in Congress. Although none of them serve in the Democratic leadership — it has been 44 years since the last time that happened — Jackson Lee is their most visible standard-bearer.

One after another, McKnight says, TV network producers called him on his cellphone. “The media is calling me to ask how things are going, ‘How is your member?’” he says. “So it’s very important to not just ease the tension from your personal life but we have to tell this story that these members are okay: They aren’t in fear of their lives, but they had a job to do.”

Meanwhile, the hordes kept coming. The mildest of them strolled through Statuary Hall. Others ripped signs from walls, vandalized doors, smashed windows. House Speaker Nancy P. Pelosi’s laptop was stolen and, the FBI says, later offered to Russian spies. Members of Congress were given gas masks. Jackson Lee called her aides who weren’t working from home to make sure they were safe. They started making plans to spend the night locked in their offices.

McKnight says anyone who was paying attention to online chatter and cable news could have seen it all coming. “We see that there are people like the Proud Boys and a Boogaloo Boys and all of these right-wing organizations [and] militia groups that are planning things out in the open to harm individuals,” he says. “And you know, when you’re on social media none of this stuff is a shock. I think we see things in this — ‘Oh, no way that’s going to happen.’ You can’t ignore these things.”

He saw the rioters through a lens that focused on his boss’s race, and his own: “You couldn’t help but think if they were black, would they have been treated in the fashion that they were treated? Right. There was a little bit more leniency — a lot more leniency — than we expected.”

Congressional staffers are accustomed to being challenged every time they step into a hallway that’s not open to the public, he says, but U.S. Capitol Police were largely standing down: “If you don’t have your badge you’re not getting into the Capitol. You have to go back to whatever your respective office building is and be able to find those credentials, or someone could walk you through. So imagine that it was that tight for an employee. But that level of security wasn’t taking place for those who had ill intent.”

Even in the days that followed with the National Guard deployed, at last, like ranks of combat troops, McKnight didn’t feel safe. “After the fact I can’t help but feel a little bit nervous walking around the Capitol grounds, even with that elevated level of security,” he tells Zenger. “I mean, we saw what was on social media, where there were [allegedly] officers and other people who were in cahoots with what’s going on. And now you know you can’t help but to be extra cautious or look over your shoulder, because you don’t know who is with who.”

“I’m on high alert on walking down the street [and] when traveling,” says McKnight. “And I’m not just on high alert for myself but for my family and friends.”

He handles it now the way he did growing up in inner-city Philadelphia: “It’s amazing that we had so many National Guard members here. You know some people — that bothers some people, you know, makes you feel uncomfortable that people are walking around with, you know, guns or machine guns … but we grew up in communities that are policed, where you see that. So I think you just kind of revert back to that experience. Like, make sure you have your eyes and ears open, right? Make sure you’re doing what you’re supposed to do and make sure that you are not causing a ruckus.”

Americans watched on their TVs, laptops and mobile devices as thousands shouted outside the Capitol on Jan. 6, and hundreds of intruders poured into the building. And they saw the aftermath: uniformed troops, fences and razor wire.

“But how far does that protection extend?” McKnight says his colleagues and friends have wondered out loud. “Once you get outside those grounds, and you’re on your way home, you’re by yourself.”

Click here to see the compete interview with Mr. McKnight.