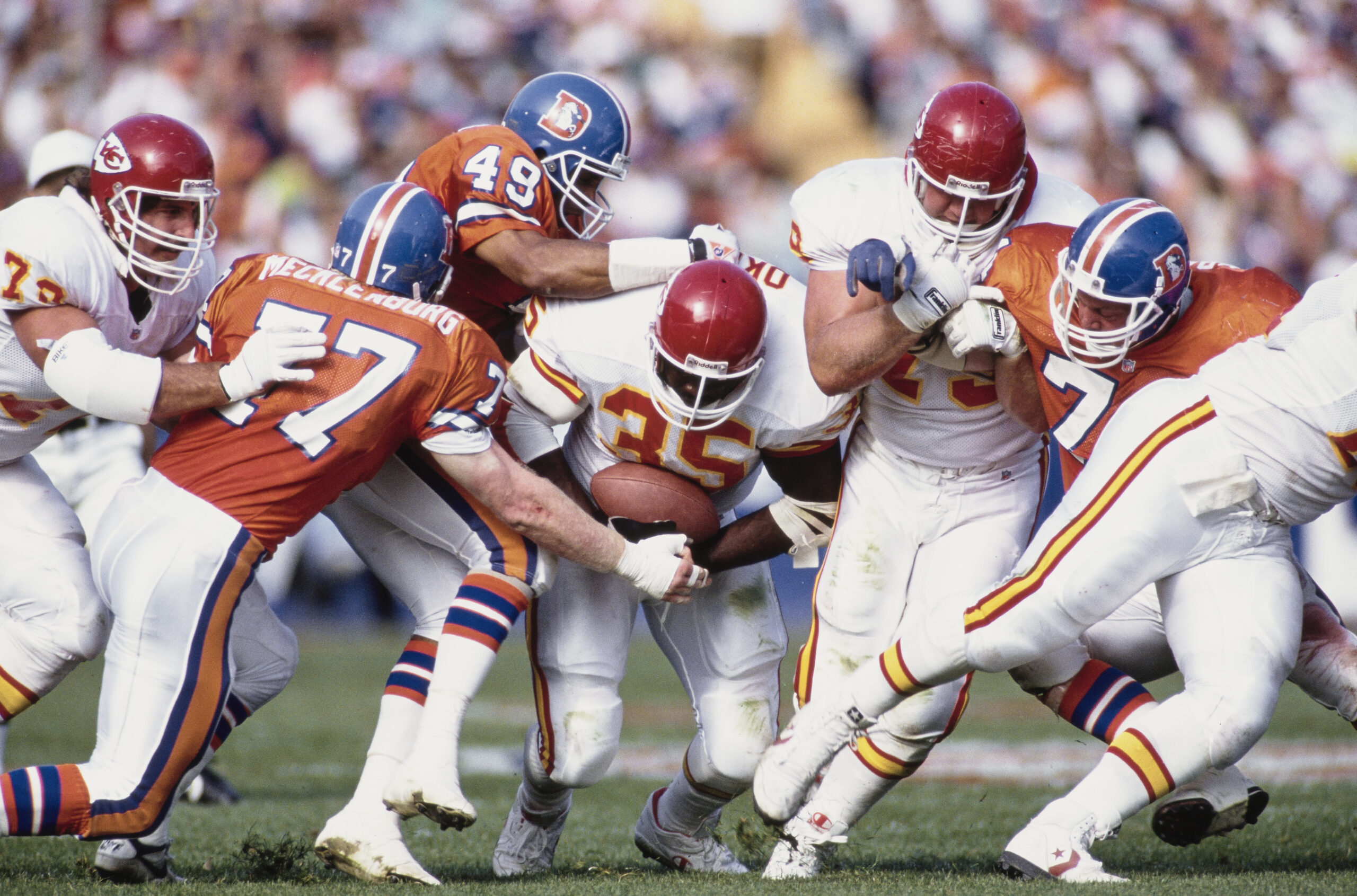 Christian Okoye #35, is tackled running the ball during a game in October 1991 in Denver, Colorado. (Tim DeFrisco/Allsport/Getty Images)

In the late ’80s and early ’90s, Christian Okoye punished defenses while playing running back for the Kansas City Chiefs. Teammate Irv Eatman appropriately labeled him “The Nigerian Nightmare” — a nickname that rang true for opposing defenses. Okoye was a big back who could run around you or through you; he led the NFL in rushing yards in 1989.

He was hard to bring down, and seldom was he tackled by a single defender.

Breaking arm tackles while scurrying into the end zone became his forte. The Nigerian-born Okoye didn’t pick up the sport until he was in college, but he was a quick study. In the course of his career, he was selected to two NFL Pro Bowls and won an AFC Offensive Player of the Year Award. He was inducted into the Ring of Honor at the Kansas City Chiefs Hall of Fame.

Even approaching 60, Okoye looks like a man who could get a first down in a pinch, but the once imposing and feared runner has turned gentle giant. Since leaving the field, Okoye has focused his attention on young people. His philanthropy and outreach to troubled youth is well-documented. He is spreading the message about the importance of education and extracurricular activities. Through the Christian Okoye Foundation, he has expanded his services and free summer sports camps to his homeland. Okoye’s passion to uplift makes him one of the most beloved Chiefs in the franchise’s storied history.

Zenger News did what many defenders couldn’t: We tackled the Nigerian Nightmare to get his thoughts on Super Bowl LV, Sunday’s showdown between the Tampa Bay Buccaneers and the Kansas City Chiefs.

Okoye also opens up about his playing days and his foundation.

Zenger News: How are you doing?

Christian Okoye: I’m doing well. I have no complaints.

Zenger: I will say this: You still look like you could give some linebackers a hard time.

Zenger: [Laughing] I can tell you take your health and physical fitness very serious. That’s always a good thing.

Okoye: I try to. After you leave the game, it’s important to stay in some kind of physical condition. Because after years of having accidents, running into guys, it puts a toll on your body.

Zenger: To see the Kansas City Chiefs organization have so much success recently, as a former Chief, that has to be a great feeling.

Okoye: It is a good feeling, of course. Anytime your team is doing well… especially for me, because I didn’t play for any other team. I played for the Chiefs, so they are like family. Every time they do well, I’m jumping up and down like a brother or sister is doing something good. They are a part of my family.

Zenger: How does it feel to see people still sporting that No. 35 Christian Okoye Chiefs jersey?

Okoye: Well, it takes me that I left enough of a mark that people still remember me. Of course, it makes me feel good. That’s why when I speak to kids these days, I tell them, “Hey, you gotta do something to be remembered. You have to work extremely hard to make your mark.” If you leave your mark, later on in your years, you will be thankful. You will be proud of yourself.

Zenger: What do you think of this Kansas City team, when you watch them from a keen eye? You understand the intricacies of football better than the average eye. What are your thoughts when watching this team?

Okoye: Well, what I see is, the team is well-coached. They have coached them in such a way that they don’t worry about the past. When they make a mistake, they just bounce back. You see in the AFC Championship, the punt returner [Mecole Hardman] fumbled the ball, and Buffalo scored off of that. We came right back and scored and still won the game. The guys are young, but they still listen to [Chiefs head coach] Andy Reid, who is the driver out there — the coach and the father figure.

Zenger: Their ability to have short-term memory for such a young team is incredible. They forget the last play and move on to the next one. Not to mention in this year’s playoffs and last year, they went down on points early and just rally back.

Okoye: That’s right. That’s a great quality to have as a football player. When you’re playing in a team sport, even in a single sport, as long as you’re still in it, never give up. Keep trying and things will turn around.

Zenger: What do you feel are the keys of victory for the Chiefs to win consecutive Super Bowls?

Okoye: Keep doing what they’re doing. [Quarterback Patrick] Mahomes is the engineer right there. Whatever you’re doing, keep doing that — running the ball and throwing it accurately, and not giving the ball up. Because you can’t give [Tampa Bay quarterback] Tom Brady any chance at all.

Zenger: How impressive is it to see Tom Brady not only still play at a very high level, but still have the ability to lead a team to a Super Bowl at 43 years of age?

Okoye: That means that he’s taken care of himself. He’s a different human being. He takes care of himself very, very well. And he takes the game of football very seriously, and he loves the game. So, when you put those three things together, you will be just like him.

Zenger: Mahomes seems to have all the intangibles and the three factors you just named about Brady as well. We see so many players say football just isn’t fun to them anymore. Mahomes seems to have fun while doing his thing on the football field. How important is it to still enjoy the game while learning and getting better?

Okoye: Yes! He’s having a great deal of fun. And that’s very, very important, because if you’re having fun, you have the hunger to improve at any stage of your game. Patrick Mahomes is having a lot of fun. People always ask me, “What do you think when you’re watching Patrick Mahomes?” And I say, “Well, when I watch him, it reminds me of playing in your backyard with your friends — just having a great deal of fun.” It’s not work, it’s a game.

Zenger: [Chiefs running back] Clyde Edwards-Helaire — Louisiana guy, my neck of the woods. He’s had a dynamic rookie year at the running back position. You even joked about people calling him your “Mini Me.” Have you had the opportunity to meet him and speak with him yet?

Okoye: [Laughing] I haven’t talked to him because of COVID. They try to keep people away from the players. He just got to the team this last year — it was during the pandemic, so you can’t really chance anything. You want to keep your players pure. Hopefully, in a couple of months, I will get to meet him. But from what I see, he’s a great player. I love the way he runs. He’s closer to the ground. He’s very close to the ground, very strong legs, and I’m hoping that he bounces back in this game and does well.

Zenger: When you watch offenses now, particularly the Chiefs, things are so spread out and wide open. Much different from the days when you played, and it was about having a great front five and pounding the ball down defenses’ throats. If you can, just speak a little bit about the different style of play nowadays.

Okoye: I think football is healthier now for the players. It’s a passing league more than a running league. It’s one of those pluses that accompanies the game, and it’s keeping the guys healthier today long-term than when we played. Pounding the ball is a good strategy, but it benefits you to have somebody in the backfield who can throw the ball. And the Chiefs have that with Mahomes, and so does Tampa with Tom Brady. If you have that guy in your backfield, then you can do that. You can spread everyone out and throw the ball all over the field.

Zenger: I’m almost sure I know who you are going to pick, but can I get a prediction with a score as well?

Okoye: You know exactly what I’m going to say [laughing]. But the Chiefs are going to win by a score of 34-27.

Zenger: You do a great deal of philanthropy work through your foundation, the Christian Okoye Foundation. I wanted to give you the opportunity to speak about the foundation and the things you do for Nigeria.

Okoye: Yeah, my foundation has been going since 1990. I’ve been working with kids in the summertime, putting on free sports camps. Trying to motivate kids to stay in school and focus on their education and set goals for themselves. I’m trying to bring the kids out of their neighborhoods and show them what’s out there, so they can better set goals for themselves. In Nigeria — I took part of my foundation back to Nigeria four years ago, so I can do the same for the kids in Nigeria. That’s going really, really well.

Zenger: Focusing on school is very important, but that time away from school can equally be important. For kids to get involved in sports and after-school activities is so important, and I know that’s something your foundation encourages as well.

Okoye: Football gave me the opportunity to do a lot of things. It provided a lot of opportunities by meeting some of the people that I met along the way. It gave me the vehicle to do what I do with my foundation. Without football, I wasn’t going to be able to do what I did and reach the kids that I reached. I did a lot with kids in Kansas City, California and Hawaii through my foundation.

Zenger: Has COVID slowed down some of the things you had planned with the foundation?

Okoye: COVID has stopped some things. We didn’t do any events at all last year. Well, in January we did our race to raise money. Other than that, we didn’t do anything else because of COVID. COVID suspended everything. So, I’m hoping this summer things will open up.

Zenger: It’s been an honor and a pleasure speaking to you. Good luck to your Kansas City Chiefs on Sunday. And a special thank you to Miss Cynthia Busby and Busby Promotions for linking us together. She is awesome. Is there anything else you want to add before I let you go?

Okoye: She is a great person. I just want to tell everyone to watch the game and watch my man Patrick Mahomes do his thing. We’re excited that the Chiefs got back to the Super Bowl. Go, Chiefs!

«Previous Post
R&B Chart-Topper J. Holiday Returns With A Fresh Variant On His Grammy-Nominated Sound»Next Post
Seeking A Place ‘Where No One Knew Me,’ Baby Storme Became A Star