There has been speculation linking the Taliban to a series of deadly attacks in Kabul in recent months.
By Raza Hamdani February 4, 2021
Facebook
Twitter
Linkedin
Email 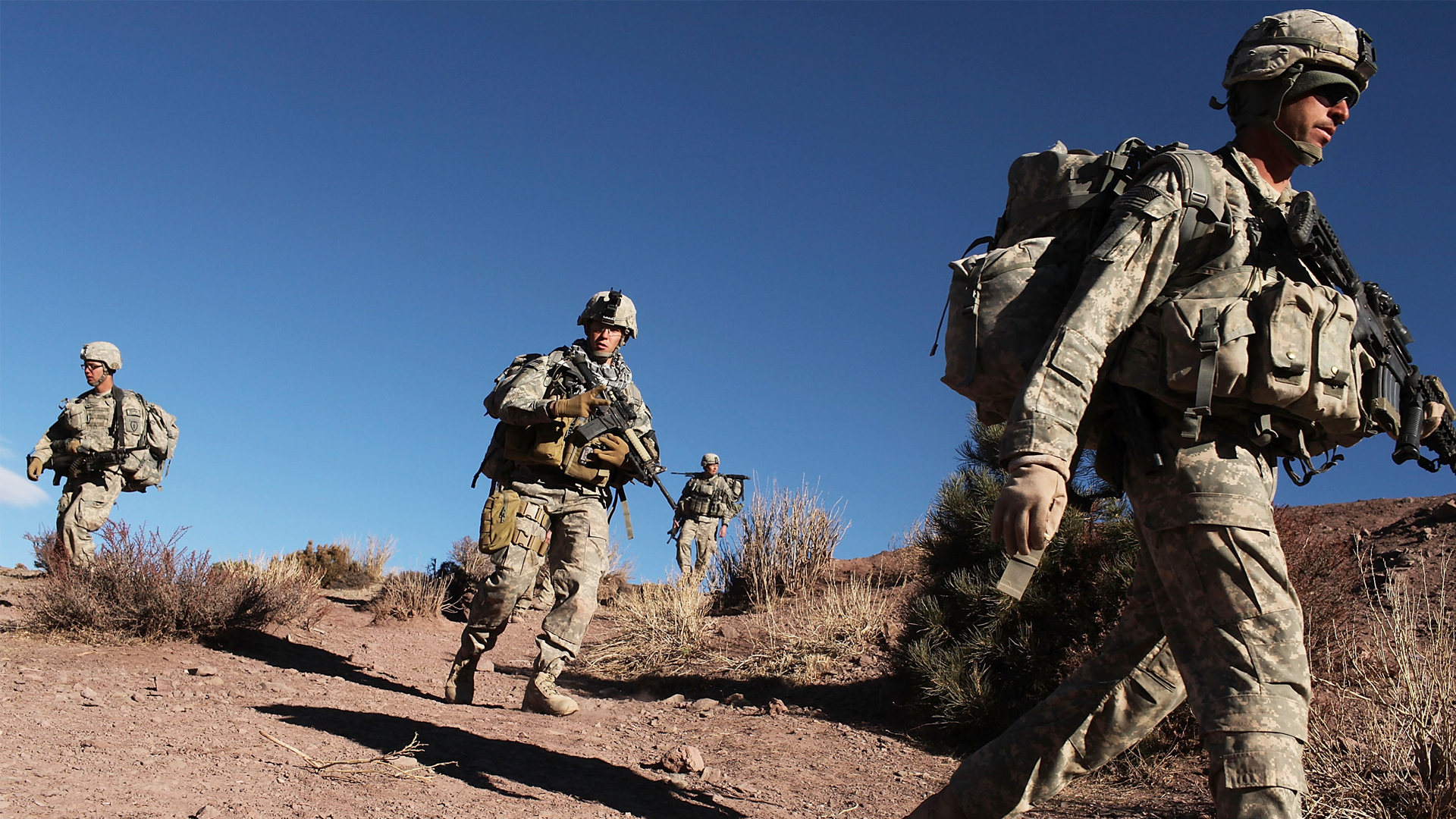 American soldiers walk along a trail during an air assault operation on the town of Oshaky, Afghanistan. (Spencer Platt/Getty Images)

ISLAMABAD – The Taliban this week posted a strongly worded tweet warning against “the presence of foreign occupation forces” in Afghanistan and countries “baselessly” asserting that the Islamic Emirate is “continuing a senseless war, is killing civilians, is destroying public infrastructure and is involved in assassinations.”

“The Islamic Emirate has a legal right to free its homeland from the presence of occupying forces with every lawful means necessary,” states the Feb. 1 tweet.

The tweet posted by its spokesperson Zabihullah Mujahid, said, “Unfortunately most countries, including the European Union, are either directly or indirectly involved in the tragedies, destruction, bombings, killings and various other crimes being experienced by our people for the past 20 years, and some are still exerting efforts to extend the presence of foreign occupation forces in Afghanistan and prolong the ongoing conflict.”

“However, if some discard the Doha accord and keep searching for excuses to continue the war and protract the occupation, then history has proven that the Afghan Mujahid [fighter] nation can valiantly defend its values, soil, homeland and rights.”

Afghanistan has experienced a series of attacks in recent months. The killings of high-profile people in Kabul have occurred despite the U.S. having reduced the number of its soldiers in Afghanistan in mid-January to 2,500 — the lowest level since 2001.

Meanwhile, peace talks in Doha, Qatar, between the Taliban and the Afghan government are at a standstill.

The Biden administration is reviewing the U.S.-backed peace process, as well as the February 2020 agreement, initiated during the Trump administration, that set a deadline for full withdrawal of American forces by May 2021.

Last month U.S. National Security Adviser Jake Sullivan spoke with Afghanistan National Security Adviser Hamdullah Mohib. A statement from The White House said that Sullivan “underscored that the U.S. will support the peace process with a robust and regional diplomatic effort, which will aim to help the two sides achieve a durable and just political settlement and permanent ceasefire.

“Mr. Sullivan also made clear the United States’ intention to review the February 2020 U.S.-Taliban agreement, including to assess whether the Taliban was living up to its commitments to cut ties with terrorist groups, to reduce violence in Afghanistan, and to engage in meaningful negotiations with the Afghan government and other stakeholders.”

The pressure on the Taliban increased in the wake of a Jan. 4 U.S. Treasury memorandum to the U.S. Defense Department on terrorist financing. The memorandum said that “as of 2020, al-Qaeda is gaining strength in Afghanistan while continuing to operate with the Taliban under the Taliban’s protection”.

“Al-Qaeda capitalizes on its relationship with the Taliban through its network of mentors and advisers who are embedded with the Taliban, providing advice, guidance, and financial support,” the memorandum said. “Senior Haqqani Network figures have discussed forming a new joint unit of armed fighters in cooperation with and funded by al-Qaeda.

“Al-Qaeda maintains close contacts with the Taliban, providing advice, guidance, and financial support,” the Treasury document states. “As of May 2020, the Taliban and al-Qaeda maintained a strong relationship and continued to meet regularly.”

Zabihullah Mujahid told Zenger News said the Taliban does not need the support of foreign fighters.

He also said the Taliban have not broken any clause in the peace deal, nor would it violate it in the future.

A May 2020 monitoring team report to the United Nations said that al-Qaeda and the Taliban held meetings in 2019 and in early 2020 “to discuss cooperation related to operational planning, training and the provision by the Taliban of safe havens for al-Qaeda members inside Afghanistan”.

“Al-Qaeda is covertly active in 12 Afghan provinces,” the report said. “Additional information suggested that discussions were held among senior Haqqani Network figures to form a new joint unit of 2,000 armed fighters in cooperation with and funded by al-Qaeda; Al-Qaeda was establishing new training camps in the east of the country.”

Afghan analyst Nisar Salih said, “Foreign fighters, be they from al-Qaeda of any other terrorist outfit, are fighting under the umbrella of the Taliban. They support each other, and the Taliban are getting training from them. After all, al-Qaeda fighters are more technologically aware than the Taliban.”