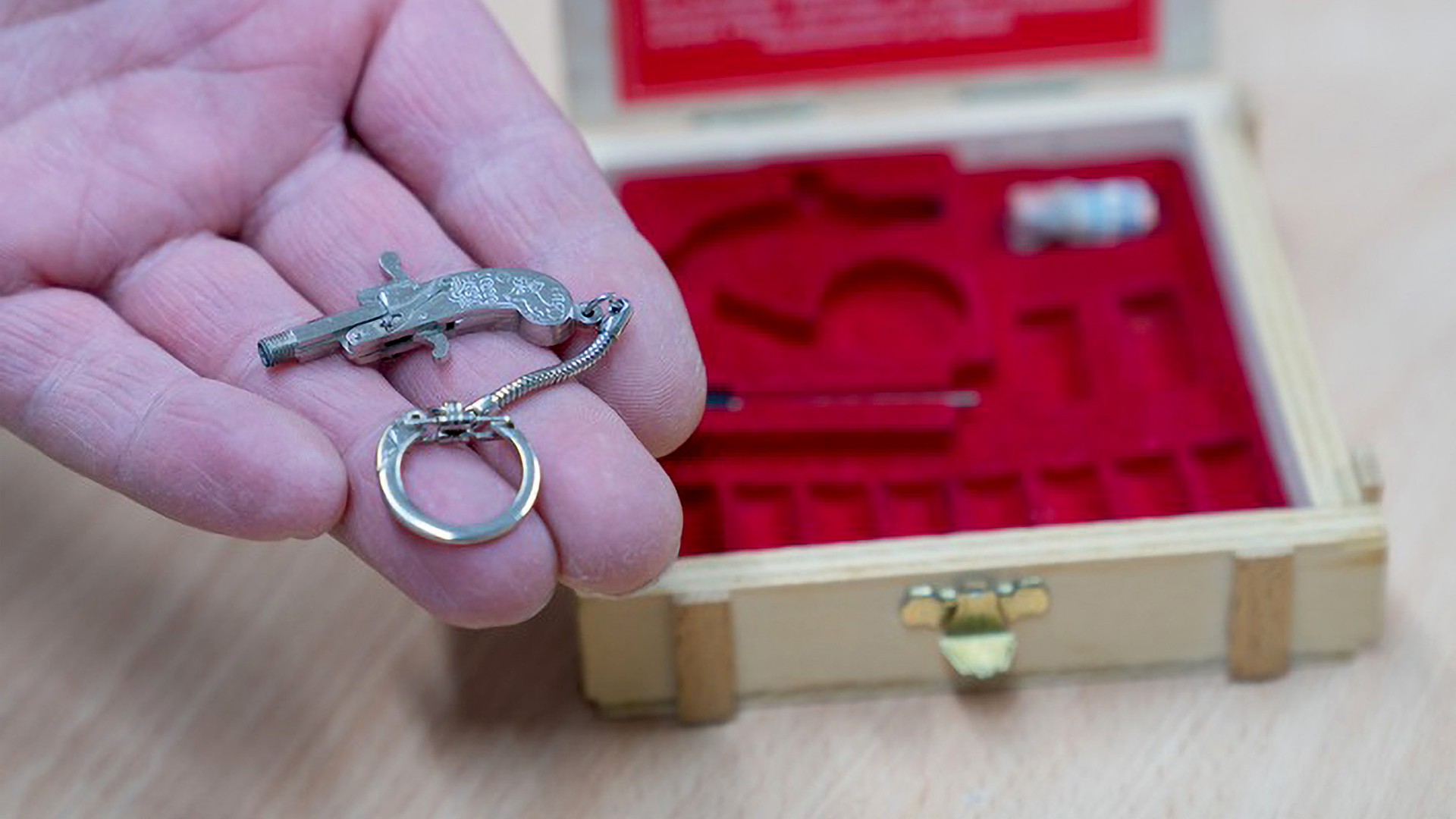 Police officers in Gelsenkirchen seized the miniature pistol, whose possession is prohibited in accordance with the law. (Polizei Gelsenkirchen, Thomas Nowaczyk/ Newsflash)

GELSENKIRCHEN, Germany — The German police have confiscated a miniature gun capable of firing live ammunition from a man planning to fly with it to Australia.

The mini flintlock pistol was a part of a keyring belonging to the man.

The 76-year-old man was planning to travel Down Under on a flight with the keyring. However, he decided at the last minute to go to the local police station in the district of Blumke-Huellen in the German city of Gelsenkirchen and find out if it was allowed.

Shocked cops then revealed to him that it was not only illegal to carry the gun on board a plane, but he also needed a ‘small gun license’ for the same.

“A minigun is classified as a legal weapon under the country’s Weapons Act,” said the police in an official report on the incident.

It was unclear why he wanted to take the live-firing miniature gun with him on the plane to Australia. Given the size of the firearm, he considered it to be harmless. However, “it actually had the same ability to do damage as a firework rocket,” said the police.

The possession of this weapon is only allowed to people over the age of 18, that too with a gun license.

The man voluntarily handed over the gun to officials after they told him it needed to be destroyed as he was not in possession of such a license.

It was not revealed how he procured the gun.

“Germany has one of the most stringent gun laws in Europe,” reads the Library of Congress, Law Library, the United States, website. “Only those persons are allowed to acquire, possess, and carry firearms who have a creditable need for the same. Fully automatic arms are banned in Germany while the acquisition of other types of weapons is highly restricted. A firearm license-holder has to have compulsory liability insurance.”

A shooting in an Erfurt school in 2002 by a student, in which 16 people were killed, necessitated a reformed Weapons Act, which was enforced in 2003. The new Act prohibits large caliber weapons use by young persons. It has also enhanced conditions for storing firearms safely.

The Act was amended again in 2009 when a teenager killed 15 people in a school at Winnenden. A federal gun register was set up to monitor compliance with the safe storage conditions by gun owners. Government officials can now access the premises of a registered gun owner to check safe storage.

“Violation of the Law’s provisions pertaining to the production, sale, acquisition (for the purpose of sale) of, or trade in weapons, that require a license or are included in the list of prohibited objects is punishable by imprisonment from 6 months to 5 years,” says the National Criminal Justice Reference Service, the United States, website referring to the document Gun Control Laws in Foreign Countries.