Seeking A Place ‘Where No One Knew Me,’ Baby Storme Became A Star 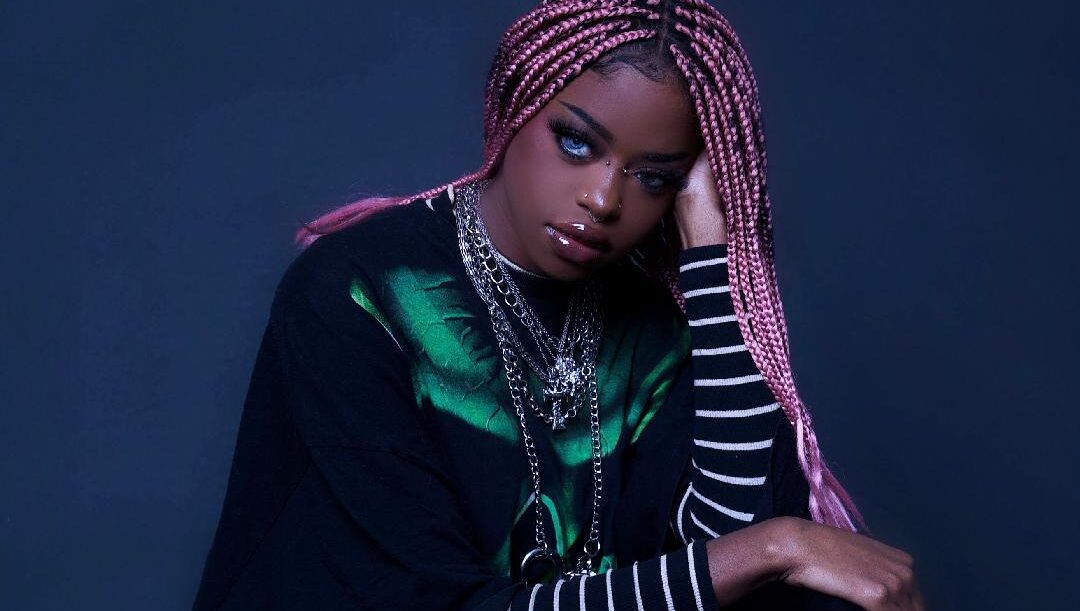 The Chinese video app TikTok has exploded in popularity since the pandemic began.

With hours of extra time on their hands, many users have turned to the app for diversion, recording 60-second dances to tracks by their favorite artists. Others have used it as a form of expression, whether to vent or to perform music of their own. New York’s Baby Storme at first found TikTok to be somewhat of an escape from real life. It was a place where she was unknown and so could be herself.

What she didn’t anticipate was using the app to launch a career. The very place where she retreated to be unknown was now making her popular — and allowing her music to take center stage. Her unique look — colorful hair, several face piercings, catchy contact lenses — captures as much attention as her soothing voice and her keyboarding talents. She is the perfect mixture of confidence and complexity.

Her new single, “Jackson,” holds the No. 1 Featured Spot on the app. The single became highly anticipated when Baby Storme released a snippet on TikTok and Lil Nas X, whose “Old Town Road” spent a record 19 weeks atop the Billboard Hot 100 chart after finding an audience on TikTok, left a comment: “Sounds really good.” Those three simple words catapulted “Jackson” to the top of the TikTok Emerging Artists Playlist on Spotify.

In an interview with Zenger News, Baby Storme reveals why she contemplated suicide just a month ago, how music saved her life, and what we can expect from her in the near future.

Zenger: I’m very glad to hear that you are good, because in late December you made a post about being suicidal and seemingly checked into a hospital. How did you hit rock bottom? You were in a very dark spot; how did you end up there?

Storme: I was in a very toxic relationship, and basically, I just got to a point where everything was terrible. And when the relationship ended, I felt like I had exhausted all of my energy into it, and I had nothing left. I was living alone. It was just a really bad place. It was a bad time for me.

Zenger: Did you seek help to get you through those times? And are you in a mentally stable place right now?

Zenger: And now you have completely dived into your music headfirst. I’m sure that is your happy place, and where your focus needs to be right now.

Storme: Yes, because I don’t dwell on the past at all. If anyone asks me, I have no exes, no past relationships or nothing like that. So, yeah … my music is my comfortable space.

Zenger: You have a unique look that I love. Is it inspired by someone or something, or is that all you?

Storme: No, it’s 100% me. For me, it was just like, I wanted to come up with something that I felt was unique. And I wanted to have a look that I felt like no one else had. My look is all over the place — the crazy hair, the piercings, the eyes, and this and that, so thank you for acknowledging that.

Zenger: Definitely! Is it a conscious thought process behind your appearance, or do you get a look for the day, walk out of the door and that’s just your look for that day?

Storme: It’s both. Literally both. Totally. I like both. Some things I plan, and then some things I am just totally spontaneous and just for fun. Out of nowhere.

Zenger: What was your TikTok takeoff moment where you realized that this thing could turn into something?

Zenger: Over 6.5 million likes, more than 400,000 followers on TikTok. I understand that you had a moment where you felt it could be a thing, but did you even expect this level of success and popularity?

Storme: I wasn’t shocked at all because I think it’s going to be even bigger. I think that I’m just starting off right now. I’m not in shock at all. I’m just really grateful for people that care about me enough to support me. You’ll see that this is just the beginning for me — the very-very beginning— so I’m not shocked at all. I don’t really think about the numbers. I don’t see myself as this big person. I feel like I’m just starting out.

Zenger: Your new single, “Jackson,” hit the No. 1 Featured Spot on TikTok. You made a very interesting video for that song. Give us the concept of “Jackson.”

Storme: The concept behind it is, it is a song about me being a stalker and following around the person who I am interested in. And I just take it to the next level. I just find a way to turn that craziness into a song. Because I feel like everyone has that inner crazy, especially nowadays with social media. I can be like an FBI detective at this point. Just watching. And so many people can relate, so I just wanted to turn that into a song. It’s just something that people can relate to and understand. It’s a catchy song, even though it’s about me being a stalker, which is also catchy. You don’t really realize what you’re saying while you’re singing it.

Zenger: It’s crazy because in the video, the guy doesn’t even know he’s being stalked, and in the social media era, that’s very possible. I thought it was a dope concept.

Storme: And you don’t even know it. That’s the craziest part because that’s actually true. You cannot even know. The whole story is fictional, by the way. I don’t know anyone named Jackson. I never stalked anyone, but just the idea of it I think is so realistic. Especially now with social media, you can really find anyone and follow their lives for as long as you want. You really can. It’s crazy.

Zenger: “Jackson” is so big and popular. Where do you go from “Jackson,” musically?

Storme: I want to make it bigger [laughing]. But other than that, I have a single that I’m dropping on Valentine’s Day. And it is a completely different vibe from “Jackson,” but it is just as strong of a single. It’s a low vibe. It’s very, very calm. It’s a very chill track, but it’s a vibe. But it’s very different than “Jackson.”

Zenger: You are a self-taught pianist. Can we expect more of that from you in the future?

Storme: Yes, 110%. A lot of the tracks that will eventually be heard from me are going to be strictly me on the keyboard. I actually have a song out right now called “Men,” which is my favorite song that I’ve ever put out. It’s just all me. Just on the piano, saying what I have to say. For the future moving forward, you will hear a lot more piano tracks. A lot of piano, a lot of violin, just very, very sad, but also very good.

Zenger: I understand you saying you don’t feel like you’re that big of a person, but the reality is, you are. How did you transition from being a “regular” person to 400,000 followers with an audience?

Storme: I just don’t think about it. I really just don’t. You’re right, there is a transition, but it happened over a course of time. If it was to happen overnight, that’s a little bit different. But for me, it was a gradual growth over the years. Let’s just say, this time last year I was maybe not at 10K followers yet. I maybe had a few thousand then. You go from like 10K, 20K to 30K, and you just kind of grow slowly. It just keeps growing gradually, so it’s like, after a certain point, you don’t really feel the growth, because it just happens so slow. It’s like when you go to the gym and you work out 30 minutes a day, you don’t really feel the progress until you look back at an old picture of yourself, and it’s like, oh my God, I used to look different. You don’t even realize it because you have been doing a little every single day, and it just adds up. So, I don’t feel… I feel totally the same. I don’t feel any different at all.

Zenger: It does have to feel good to know that so many people are invested in what you’re doing and the things you have going on and promoting.

Storme: It’s a great feeling because for me it’s like, I was so nervous for a long time. I wanted to see my music career go somewhere. Obviously, I believed in myself enough to know that it would go somewhere. But still, without that recognition, it’s a little bit hard to be taken seriously by people around you, and to be taken seriously by yourself, if anything. So, for me, starting to see the progress and starting to see people listen to my music… I remember this time last year when I was putting out music; I remember thinking, “Is the music even good?” I knew it was good, but no one was really listening. When I started seeing people listen to it, it was like, “Oh, OK, people actually really listen to it because they want to.” And that’s what made me get to the point where it was like, “OK, the music is good, it’s good.” And just started creating more and more, because without that recognition, it’s hard to really go anywhere. I feel like you just need that. I’m just grateful. Super grateful, but I try not to think about it too much.

Zenger: What you are saying is so true, because I’m sure for you, it seemed as if other people’s music was taking off overnight, although that may not have been the case. I understand feeling like people who came in around the same time as you are quickly moving, and you are in slow motion.

Storme: Oh, yeah! It’s easy to compare yourself to people on the internet, but in reality, you have no idea what they’re going through. It’s so easy to be like … someone like Lil Nas X. He blew up overnight with that song [Old Town Road], but he put out like 14 songs before that. He was sleeping on his sister’s couch; his family disowned him. The whole thing is like, you don’t really know what people are going through before they have their breakthrough. I already know that nothing on the internet is really what it seems. I know enough now about the industry to know that there are so many inside jobs. People working to make something happen for a person. I know it’s not overnight. I 100% know that now.

Zenger: I wish you continued success. Keep doing your thing, and I’m sure we will be talking again in the near future. Is there anything else you would like to add?

Storme: Thank you for taking the time out to talk to me. I appreciate it.

«Previous Post
‘Nigerian Nightmare’ Okoye: Chiefs Can Go Back-To-Back At Super Bowl LV»Next Post
I SAW THE SIEGE: ‘You’re There, You’re In The Heart Of It So It Felt So Unreal’