Despite leading a multibillion-dollar firm, Deryl McKissack said she still encounters racism in the construction industry. 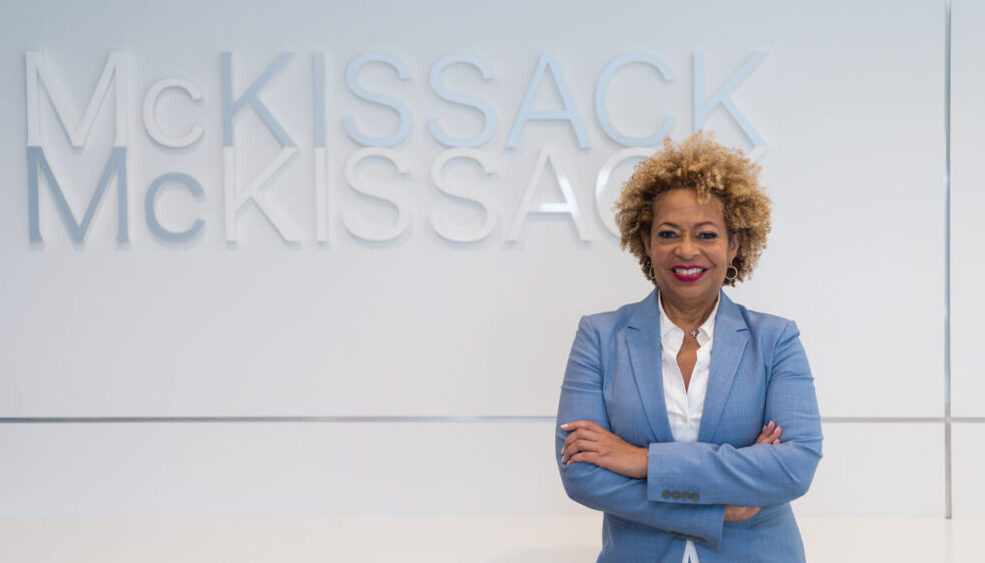 WASHINGTON, D.C. — It all started because she wanted to claim her seat at the table.

Deryl McKissack had worked hard in the construction business for years but was always told to put her head down, work harder and not ask any questions.

When her new boss wanted to demote her simply because she was a woman, McKissack said, “I quit.”

With a thousand dollars and a business plan drafted using a book purchased at Barnes & Noble, she launched McKissack & McKissack.

“I just think it was my passion that got me through, and my determination of, I’m just not going to let anybody define me,” she said. “No one can stop me from getting the work that I’m supposed to get. And whatever I get, I’m going to make sure that we do a great job.”

McKissack, president and CEO of McKissack & McKissack, is one of the nation’s foremost African American female engineers. She leads an architectural, engineering, program and construction management firm that today oversees more than $15 billion in projects nationwide.

Some of the nation’s most stunning and significant architectural projects of the 21st century were designed, managed or built by McKissack & McKissack.

McKissack & McKissack has overseen renovations at Washington, D.C., landmarks such as the Lincoln, Jefferson and Martin Luther King Jr. memorials — and they are just a small fraction of the company’s national footprint.

Under McKissack’s leadership, the company has worked in the energy, education, aviation, infrastructure, culture and commercial real estate sectors on noteworthy projects such as the O’Hare International Airport Modernization Program, the DC Waters Clean River Project and Nationals Park, the home stadium of the Washington Nationals Major League Baseball team.

The company is an outgrowth of the oldest minority-owned architecture/engineering firm in the United States. Its roots predate the Civil War, when a slave named Moses McKissack learned the building trade. It was his grandson, Moses III (Deryl McKissack’s great-great-grandfather), who launched the first McKissack & McKissack in Nashville, Tennessee.

Since launching the newer McKissack & McKissack 30 years ago, Deryl McKissack has grown her company to include more than 150 employees and offices in Baltimore, Chicago, Dallas, Los Angeles, Miami and Washington, D.C.

But building the billion-dollar company in an industry dominated by white men wasn’t easy.

The Howard University alum recalls making a presentation at a university to a room full of men in one of her first attempts to gain business for the company in 1990.

When the presentation was done, the man in charge looked at McKissack and said, “Little lady, there is nothing that you can do for us.”

“I looked him in the eye, I grabbed his hand, and I was shaking it really hard, and I said, ‘Thank you so much for taking your time to listen to my presentation, and I look forward to working with you,’” McKissack said. “Then I went out on that campus for two hours and I just looked at every job I was going to be working on. I mean, I just walked through the campus and I started thanking God for the work that I was going to be doing on this campus. I believe in planting seeds.”

That seed sprang up about six months later.

The only African American man seated at the table on the fateful day of McKissack’s presentation was promoted to boss. Impressed with McKissack’s gracious response to the way she was treated, the new boss reached out to McKissack and offered her a small job worth $5,000. Within a year, McKissack had acquired $1 million worth of business with that university.

“I just never take no,” McKissack said. “I stare down the barrel of no so much, but I keep looking until I find my yes. I have won a lot of jobs at debriefings where they’re sitting there and telling me how I don’t add up, and then I get to tell them how I do.”

Even with her record of success, McKissack said she still encounters racism in the construction industry. She continues to experience “microaggressions,” which she explained as covert expressions from clients who, despite her expansive portfolio, continue to openly question her company’s ability to do the job.

“To be so successful [on previous projects] but yet get questioned over and over again on the next project — that’s what we’ve had to deal with,” McKissack said. “I’ve had to deal with it for 30 years now. &mldr; We’re achieving excellence, but at the same time you get slapped in the face every time you try to do something. There’s always resistance. There’s an undercurrent of, are you good enough? Or, can you do it? And extra questions. I’m still on calls that I’m in amazement on what I’m hearing.”

“I just hope that it gets better,” she said.

True to her character, McKissack is not one to just sit back and ignore these issues in the industry she loves; she’s addressing them head-on. She launched a 7-Step Plan to Confront Racism in the Architecture, Engineering and Construction Industry.

Blacks are significantly underrepresented in architecture, engineering and construction.

McKissack said some companies have already adopted elements of her plan, but in 2021 she hopes to bring more of the industry’s major players on board.

“I’m going to be forming a group of companies that are huge companies that can really make a difference,” she said. “Because I know their CEOs really well, I’ve started small conversations with them, but we’re going to make it a little more formal in 2021.”

Keith Foxx has watched McKissack’s career over the past 20 years and believes her to be not only a visionary, but one of the industry’s foremost advocates for diversity.

As a program manager at RK&K, Foxx worked with McKissack on the D.C. Power Line Undergrounding program. When Foxx voiced his intention to start his own business, McKissack helped him secure his first government contract. Foxx is launching his engineering and construction management firm, FOXXSTEM, this month. He is grateful for McKissack’s support.

“Starting your own business, there are a lot of unknowns,” Foxx said. “She found a way to help me get my first contract. I will never forget that.”

“If she talks, everyone is listening, and she has the ears of some very important people,” Foxx said. “She’s legendary — a powerhouse and an icon — because she’s blazed a trail that I’m going to walk in.”

Beyond helping minority businesses get their foot in the door, McKissack helps them sustain success in the industry.

Christine Merdon, chief operating officer of McKissack & McKissack, said McKissack often speaks with pride about a minority contractor who was hired to work on the Washington D.C. Convention Center project managed by the firm.

“The contractor began the project with one truck, but by the time the project was over, he owned five trucks,” Merdon said. “When we bring minority- and women-owned firms on projects, it’s not only that they show up, but they are sustainable and have increased capacity.”

McKissack celebrated her company’s 30-year anniversary in 2020. That year the company received Inc. magazine’s 2020 Best in Business Award for its workforce diversity plan. Also in 2020, McKissack was elected to the National Academy of Construction. In bestowing the honor, the academy described her as “a visionary leader and entrepreneur with significant contributions in architecture, engineering, construction, and program management and a mentor to the next generation of industry leaders.”

The coronavirus pandemic has been a boon for McKissack’s area of the construction industry; clients have taken advantage of reduced traffic to launch school and infrastructure projects. McKissack’s company won bids for more than 40 projects, and more are expected.

She said her company is emerging from the challenges of 2020 even stronger. By slowing down, and spending less time traveling and more time interacting with employees, McKissack was able to see her business in a new light.

“I know now what we do good and what we do great,” McKissack said. “I know the people in the company, and what their strengths are, and I like to build on people’s strengths.”

Merdon said McKissack’s visionary leadership, political savvy and compassion for her employees has enabled the company to lead “mega projects” while also creating opportunities for minorities in the industry.

“Her leadership inspires people and draws really good people to the firm,” Merdon said. “Everybody has to work through tough days, but if you have a leader that believes in you, you can get it done.”