Picture This: Flip Charts Help In Fight Against Leprosy 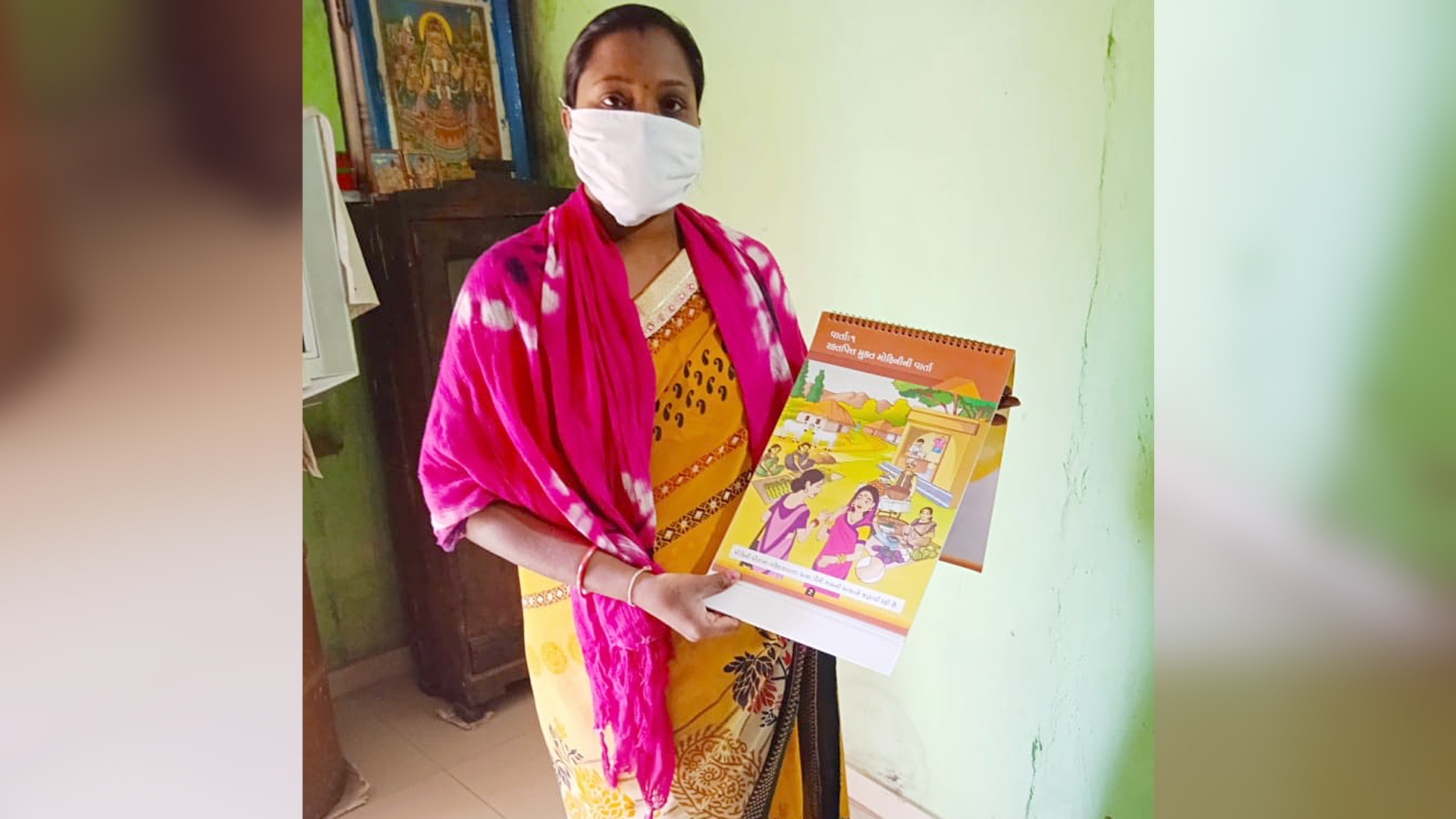 Gayatriben Jadav, one of the accredited social health activists in Gujarat, with a pictorial flip chart. (Jadav)

MUMBAI, India — Sometimes, a picture is worth a lot more than a thousand words.

In six Indian states where leprosy is endemic, more than 300,000 community health workers are using large, pictorial flip charts that tell the stories of two women in ways meant to help detect cases at an early stage and reduce the burden of the disease.

Leprosy, also known as Hansen’s Disease, is curable, and if treatment is started early, it can prevent disability and deformities caused by the disease. Prolonged, close contact with someone with untreated leprosy is needed to catch the disease, according to the Centers for Disease Control and Prevention.

The grassroots effort is focused in the states of Bihar, Chhattisgarh, Gujarat, Jharkhand, Odisha, and West Bengal.

Gayatriben Jadav is one of the accredited social health activists in Gujarat who reads to community members from a colorful flip chart. In the local language, the chart tells the stories of two women, Mohini and Sitara. Mohini observes a numb patch on her body and seeks immediate medical help. The doctors diagnose her with leprosy, an infectious disease that affects the skin, the peripheral nerves, the upper respiratory tract and the eyes. But with medication, Mohini is cured. Sitara, who has developed similar symptoms, ignores them, and her condition worsens.

“The pictorial flip chart is very interactive,” said Jadav. “It generates curiosity among the locals when we narrate the story.”

While the community health workers in Gujarat have always carried small pocket-size foldable charts with general information and some pictures, said State Leprosy Officer Dr. Girish Thakar, “the new flip charts we have received are bigger, and the approach is through a story and colorful pictures of characters.”

In 2018, India recorded 120,334 cases of leprosy, a 2019 World Health Organization report states. Southeast Asia reported 71 percent of all the global cases, according to the report, with India and Indonesia (17,017 cases) together accounting for 92 percent of the cases in the region.

Social health activists like Jadav are known as the backbone of primary health care in India.  Their training enables them to provide immunizations, antenatal care and family planning, tuberculosis detection services.

“For leprosy awareness and case detection, we would generally ask people if they have any patches or numbness in any part of the body,” said Jadav. “At times, people ignore our advice. But we keep following up with them as much as possible.”

Over the past few months, Jadav has referred three people for suspected cases of leprosy; all turned out to be negative.

Thakar, the state leprosy officer, said that workers, being local women, “routinely visit the households and relate to the community people very well, In leprosy surveillance, [their] key role is to identify suspected cases and help in active case detection. They also have to spread the message that leprosy is curable and its treatment is available free of cost at all public medical institutions.”

Thakar said that Gujarat was declared as low endemic in 2004 after 11 out of the 12 high-endemic districts eliminated leprosy. WHO has defined elimination as a prevalence rate of less than 1 case per 10,000 inhabitants.

Yohei Sasakawa, WHO Goodwill Ambassador for Leprosy Elimination, said that the efforts of the community health workers are key to eradicating leprosy in India, which was a dream of Mahatma Gandhi.

India’s National Leprosy Eradication Programme, started in 1983, states that the country achieved the goal of leprosy elimination as a public health problem at a national level by December 2005.

“Although prevalence has come down at national and state level, new cases are being continuously detected and these cases will have to be provided quality leprosy services,” the program’s website states.

“We are working with an objective of aggressive detection of cases and breaking the chain of transmission,” said Dr. Vijay Pandey, state leprosy officer in Bihar in eastern India.  “The trouble with leprosy is that a large number of people fail to identify the disease till their nerves start getting affected and they reach an advanced stage. Awareness is therefore crucial, and we are focusing on it through our information, education and communication campaigns.”