I SAW THE SIEGE: Congresswoman and aide fled House chamber as police shouted: ‘Man your stations!’ 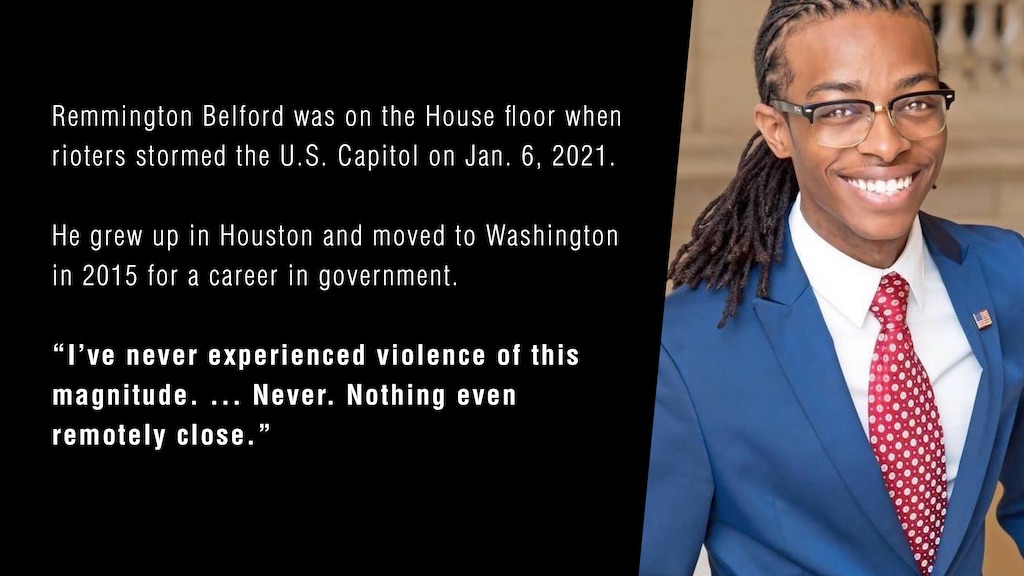 “Lock your doors, stay away from any windows and refrain from using any technology.” That’s what Remmington F. Belford heard over a loudspeaker in his Capitol Hill office on Jan. 6, 2021, minutes after he escaped the U.S. Capitol. He had just witnessed a mob overtake the building. A large majority of congressional staffers were teleworking, a precaution to limit the spread of COVID-19. But Belford was there, trying to make sense of the fear that gripped everyone around him.

A mostly white throng had stormed the Capitol and five people died as a direct result, including one rioter and one police officer. Belford tells Zenger News that he believes a swarm of African-American protesters would never have been allowed to spiral out of control.

“I’m going to probably get a little bit of flak for this, but I’m going to be completely honest with you,” he says. “If that was a group of people of color, it would have never gotten that far, they would have never gotten that close. And it would have been a mass casualty. An event of mass casualties.” Race, Belford believes, played a role in some officers’ willingness to ask the intruders “just, nicely, to move around. And ‘can you leave?’ and walking them.”

His boss, Rep. Yvette D. Clarke (D-N.Y.), was on the House floor with him in tow when the shouting started, and then the breaking glass. They made their escape before the worst of the riot was in full swing. Chief of staff Charlyn Stanberry warned him not to wear his congressional staff ID badge for the rest of the day if he shadowed their boss.

Clarke, he says, decided they should leave the House chamber and return to her office in the adjacent Rayburn House Office building, mainly because she was “very particular about being around large groups of people” while COVID ran rampant.

And “as we’re going, we hear the Capitol Police officers’ radio,” he says, “saying, you know, one of the supervisors yelling — like, our Capitol police officers — ‘Man your stations!’ And it was urgency in his voice.”

Even in their legislative office, safety was not guaranteed. The Cannon House Office Building, just two doors to the east, had already been evacuated once that afternoon.

Behind a locked door, Clarke told him in the quiet that she was “triggered” by what she saw minutes earlier. “She’d experienced an armed gunman, you know, taking the life of one of her colleagues when she was on New York City Council,” Belford says.

Councilman James E. Davis was shot to death by a political opponent who fired repeatedly from a balcony during a City Council meeting on July 22, 2003. Clarke saw it unfold in person.

This time, as Belford sat by himself responding to worried text messages, he watched the continuing footage of protesters loyal to then-President Donald J. Trump overrunning the Capitol building.

Belford moved to Washington, D.C. in 2015 from Houston, Texas in 2015 to work for elected Democrats. “We are on the right side of history,” he says. “We are not perfect but there’s a sense of pride.”

To continue his career he will have to make his peace with walking to work every day on streets that look militarized — and navigating marbled hallways that no longer seem secure because of what happened there.

He’s grateful he took his ID badge off and stuffed it in his pocket that day. “Heaven forbid, something could have happened. I could have been identified. And while that’s a stretch, because … I’m not a member [of Congress], it has increased my skepticism of individuals who could potentially pose a threat,” he says. “And it has inflated my defense mechanisms to a thing where I look around and check. I check what I’m doing, where I’m going.”

“My coping mechanism is to be in control of things,” says Belford, “but it’s been greatly exacerbated. And it’s unfortunate, but it’s something I think is going to stick with me for a while.”

Click here to see the compete interview with Mr. Belford.