Not A Crime: Historic Prison Open To Tourists 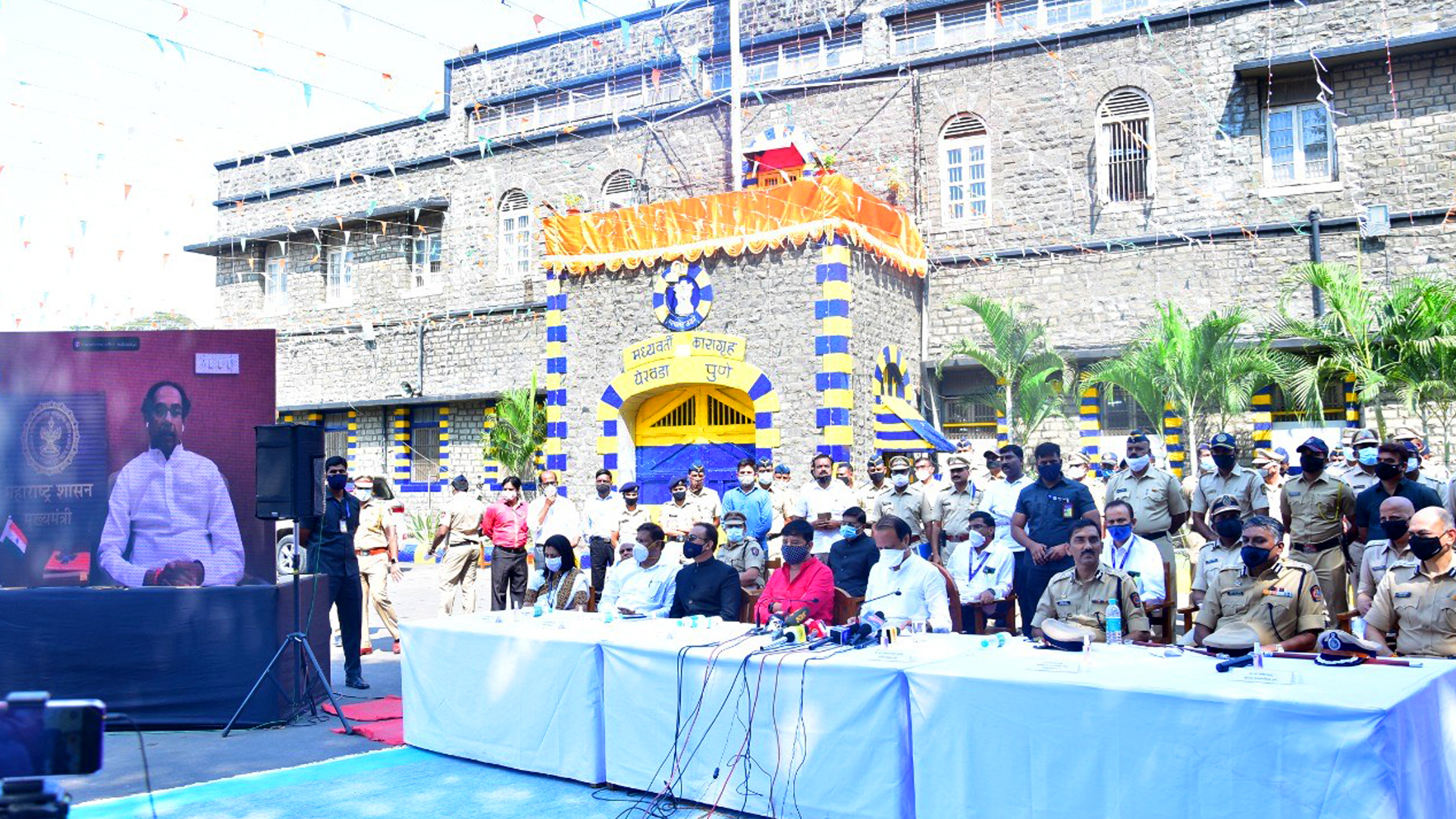 Virtual address by Maharashtra Chief Minister Uddhav Thackeray at the inauguration of the initiative on Jan 26. (Shahu Darade)

MUMBAI, India — Students can now go directly to one of the highest security prisons in India — without having committed any crime.

Historic sections of the 155-year-old Yerawada Central Prison, where Mahatama Gandhi was imprisoned three times, are now open to students, teachers and social organizations as part of a tourism initiative launched on Republic Day, Jan 26, by the chief minister of Maharashtra, Uddhav Thackeray.

Thackeray said visitors will be reminded of the leaders of India’s freedom struggle during their tour.

In addition to Gandhi, the prison at various times also housed Jawaharlal Nehru, India’s first prime minister, and Bal Gangadhar Tilak, the first leader of the Indian independence movement, among a host of other leaders in the independence struggle.

The prison, which today houses over 5,000 inmates, is the largest in the western state of Maharashtra. While the sections that house inmates are strictly off-limits, visitors will be allowed to see the historic yards where groups of cells are named after their well-known inhabitants: the Gandhi Yard and the Tilak Yard. In 1932, the historic Poona Pact that granted new rights to the depressed classes was signed between Gandhi and Bhimrao Ramji (“B.R.”) Ambedkar underneath a mango tree in the Gandhi Yard.  A plaque under the tree recalls that moment in history.

Visitors will also be allowed to see the gallows where death sentences are executed.

Built in 1866, the Yerawada jail is spread over 500 acres, including the prison cells, a women’s jail, an open [minimum security] jail, a training center, and a large plot where inmates grow vegetables and fruits.

“The Yerwada Central Prison has a lot of history associated with it,” said Sunil Ramanand, additional director general of police (prisons) in Maharashtra. “We thought that school and college students, as well as social organizations, should get an opportunity to visit these historical parts of the prison. We have conserved these spots over the years and maintained them well.”

It was in this jail where Ajmal Kasab, the man convicted of the 2008 terror attack in Mumbai, was hanged in 2012. The area where the death sentences are executed is known as the “faasi yard” or “hanging yard.”

The prison tourism initiative will follow strict Covid-19 protocols, Ramanand said, with all applications required to be submitted on the letterhead of the educational institution or the social organization.

“Faculty members will have to accompany the students. Every visitor will have to carry an identity card, and visitors will not be allowed to carry any bags, cellphones, water bottles with them. Guides appointed by the prison will take the group on the tour and also click photographs that will be sent to them after the visit,” he said.

Senior jailer S.U. Mhaske said that the number of visitors will be limited to 50 a day.

“The visitors will not come in contact with the inmates lodged in the prison at any point,” said Mhaske. “We will also ensure that permissions for these tours are given well in advance so that they can be planned well.”

Prison tourism falls into the category of what many describe as dark tourism. A 2015 article in the Journal of International Social Research stated that former places of war, punishment and imprisonment have become a popular tourist experience.  “This mentality has exposed a new kind of tourist named “dark tourist.  &mldr; “By visiting these places, tourists can establish ties with the past and make a connection with the sufferer who lived in the past,” the article says.

Prisons are places that host many different people, as well as different stories, the article states. “Escape attempts, deaths, violence, suffering are all part of these stories. Therefore, prisons have always been an interesting experience for people.”

“I see the (Yerawada prison) initiative as a positive step,” said Vijay Raghavan, a professor at the Centre for Criminology and Justice at Tata Institute of Social Sciences. “Since the visitors are limited to the historical parts and there is no possibility of any interaction with existing prisoners, I see no problem in it.

“The concept may generate interest in prisons among civil society groups. Also, the whole narrative about prisons is that they house all the dangerous people. But when the visitors interact with the jail officials during the tour and see the historic spots, these narratives will change and develop newer conversations.”

The Maharashtra government plans to extend the tourism initiative to four other jails in the state.