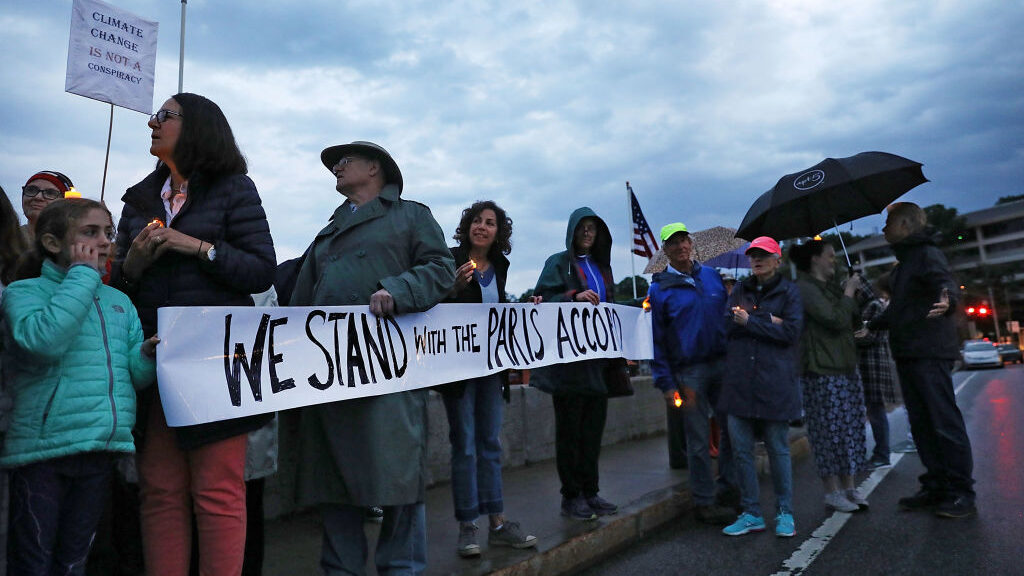 Dozens of Connecticut residents converge along a bridge at a vigil and rally for the environment and against former President Donald Trump's decision to withdraw from the Paris climate accord in 2017. The United States has now rejoined the U.N.’s Paris climate agreement under the Biden Administration. (Spencer Platt/Getty Images)

The United States is expected to play a major part in world climate discussions in Glasgow later this year, after President Joseph Biden rejoined an international climate change treaty that former President Donald Trump withdrew from over three years ago.

In December 2015, 197 nations adopted the Paris Agreement as a result of the annual United Nations Climate Change Conference (UNCCC) in the French capital. The flexible agreement requires nations to make commitments to cut carbon dioxide emissions more than any previously stated goal.

However, saying it would hurt American competitiveness, less than two years after the signing of the Paris Agreement, Trump announced the U.S. would withdraw from the treaty, which did not formally take effect until Nov. 4, 2020.

The withdrawal did not last long. On Jan. 20, President Biden signed an executive order re-entering the U.S. in the agreement.

With the U.S. back on board, domestic and international officials are anticipating the next round of talks, when the 26th session of the UNCCC meets in Glasgow, Scotland, on Nov. 7-8, 2021. There, nations will seek to strike the next major update to the 2015 Paris Agreement, and build upon the marks set at that conference.

At the recent Reuters Events: Future of Renewables conference, Achim Steiner, administrator at the United Nations Development Program, said the Glasgow conference would be pivotal because it would give countries the option to “raise the level of ambition”.

He said at the Paris conference in 2015, countries recognized they could not commit to specific goals. Instead, each country developed a national climate strategy to go beyond previously set emission targets, despite there being no enforcement mechanism.

“Glasgow will give us the opportunity to prove we have made some generational choices,” Steiner said. “We need to get over the fact that things will change in small steps.”

He said when countries meet in Glasgow, they will try to present more ambitious goals, which could make it more difficult to reach an agreement.

“Glasgow will be recognized as either a breakthrough or a failure,” Steiner said. “In moving forward, there’s little room for business as usual.”

One of the key developments factoring into future climate negotiations will be how much of a role climate projects play in COVID-19 stimulus spending.

Andrew Steer, president and CEO of World Resources Institute, said that in the next 24 months, $10-$20 billion will be spent worldwide on economic recovery.

“It’s incredibly important the money is allocated toward tomorrow’s economy, not yesterday’s economy,” he said.

Steer said countries are increasingly making ambitious goals, as 70 countries have committed to “net zero” carbon emissions by 2050. That means they are not adding new emissions to the atmosphere.

China has set its net zero timeline for 2060, while 100 more have committed to going net zero with no time frame. The Biden transition website has also said it will set a goal of the U.S. reaching net zero in the next 30 years.

“At this moment of profound crisis, we have the opportunity to build a more resilient, sustainable economy — one that will put the United States on an irreversible path to achieve net-zero emissions, economy-wide, by no later than 2050,” the Biden transition website said.

Reaching these goals will provide new challenges for many nations, Steer said, and how they direct their stimulus spending will help determine if they can meet these goals.

“For far too long, our planning systems have been based around the assumptions that the past is a good predictor of the future,” Steer said. “Now we know the future is much more uncertain, much more risky.”

During a November panel session hosted by the Atlantic Council titled, “To Glasgow and beyond: Building a path towards renewed US climate engagement,” several panelists said they expected a renewed leadership position from the U.S. with Biden at the helm.

“There is the expectation that the Biden administration will join them and the rest of the world in leading on climate change,” said Claire Healy, director of E3G’s Climate Diplomacy, Risk and Security Program. “I do think this is a pivotal moment that can increase the pace of change.”

While the U.S. may have exited the Paris Agreement, several governments and international authorities kept up heir engagement with American officials, said Katarina Kertysova, policy fellow at the European Leadership Network. But instead of working with the federal government, these authorities worked with “subnational” groups, such as the U.S. Climate Alliance, a partnership of 24 states and individual business leaders, including Mike Bloomberg and Bill Gates.

Margaret Jackson, deputy director of climate and advanced energy at the Atlantic Council Global Energy Center, said that in the U.S., domestic priorities could overshadow climate change policies, just like it did under former President Barack Obama. After his election in 2008, Obama put his political capital into pushing through healthcare legislation, forgoing an effort to push “cap-and-trade”, which was then a favored climate change policy among many who wanted action.

However, Ana Unruh Cohen, staff director for the House Select Committee on the Climate Crisis, said she anticipates climate action to be part of legislation targeted to address the COVID-19 pandemic. Recent legislation that would reauthorize federal highway investment and broadly fund infrastructure upgrades had a section devoted to climate projects, which was kept in place while considered by the Republican-controlled U.S. Senate.

“That there’s a title that dealt with climate gives me new optimism,” Cohen said. “We can craft an infrastructure package that has significant climate packages, including investment in the electrical grid and investing in renewable vehicles.”