Afghanistan, Taliban wait to see what the Biden administration will do. 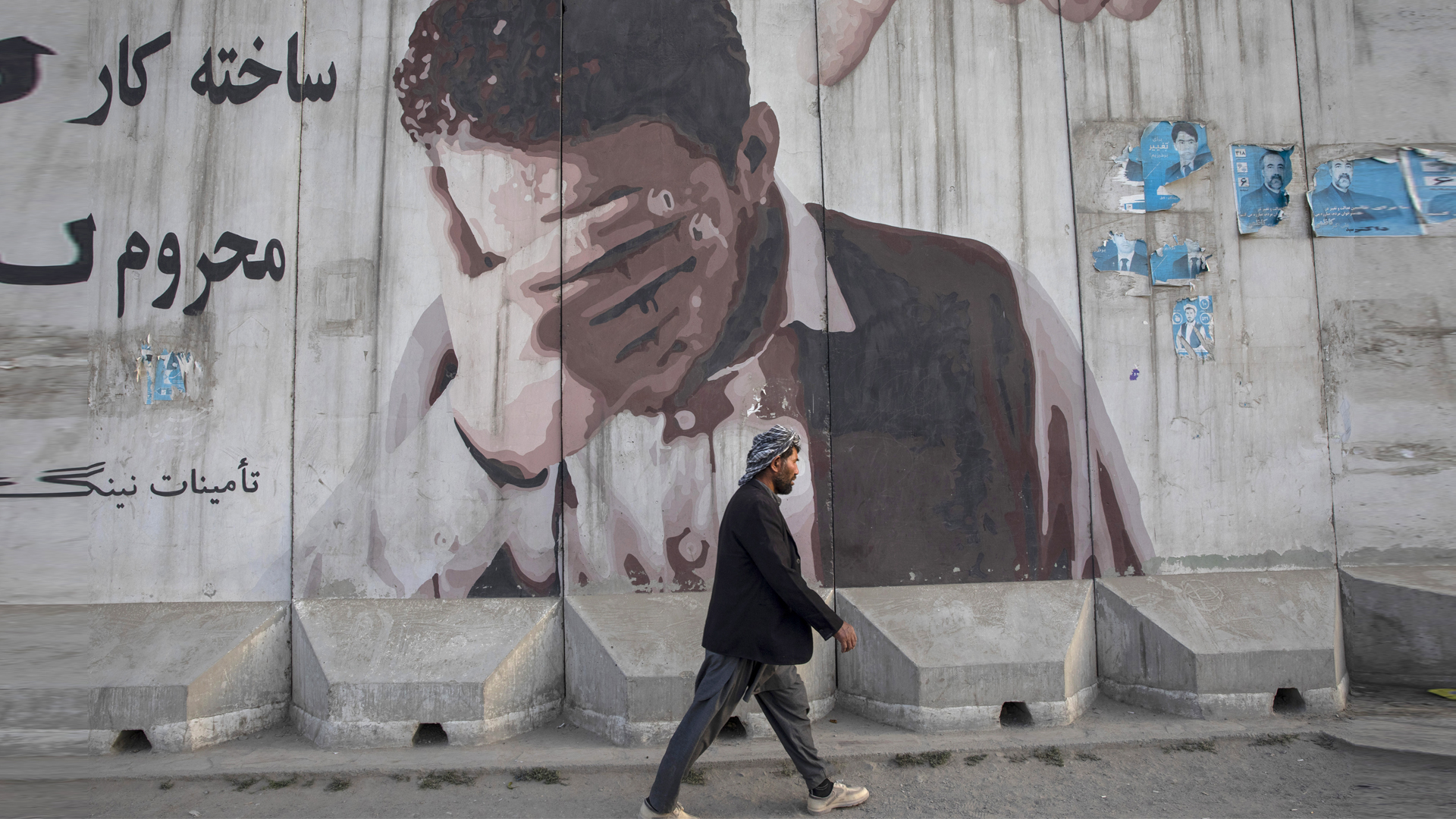 A man walks by a mural painted on a blast wall in Kabul, Afghanistan. (Paula Bronstein/Getty Images)

Though negotiators have been in Doha, Qatar, since early January for the second round of peace talks between the Afghan government and the Taliban, top leaders from both sides have been notably absent.

Meanwhile, President Ashraf Ghani huddled with political leaders in Afghanistan during what appears to be a stalemate in the talks.

Ghani met with the chairman of the High Council of National Reconciliation, Abdullah Abdullah, former President Hamid Karzai and former jihadi leader, professor Abdul Rab Rasul Sayyaf, on Jan. 26, according to a statement from the president’s office.

“An array of issues were discussed, mainly on the ongoing situation of Afghanistan, ceasefire, reduction of violence, political consensus, while emphasizing on a desirable peace that can lead to stability and end of bloodshed in the country,” the statement said.

With a new administration in the United States under President Joseph R. Biden, both sides are waiting to see what policies emerge. Before being elected, Biden had favored keeping a small intelligence-based presence in Afghanistan. Taliban leaders have rejected any foreign troops.

The Afghan government is eyeing this opportunity (since the election) to make the new U.S. administration lean toward it, said Imtiaz Gul, executive director at the Center for Research and Security Studies based in Islamabad.

“Afghanistan is re-arresting the freed Taliban prisoners to show that the Taliban are not serious in having peace,” he said. “The Afghan government sees this opportunity of pushing the Joe Biden administration to re-visit the peace agreement. And, it is insisting that the Taliban are behind the upsurge of violence in Afghanistan.”

Though peace talks between the Taliban and the Afghan government started in September 2020, following a U.S.-Taliban security deal in February that year, violence in the country has been on the rise.

Nader Nadery, a leading member of the Afghan government negotiations team, tweeted on Jan. 26 that talks had not been held for nine days, and he said the “other side is not willing to engage in talks to end the conflict & save lives.”

“Peace and ending the violence are our people and our government’s top priority,” Nadery tweeted.

In the interim, top-level U.S. officials have been speaking to Afghan leaders. On Jan. 22, U.S. National Security Adviser Jake Sullivan spoke with Afghanistan National Security Adviser Hamdullah Mohib. A statement from The White House said, “Mr. Sullivan underscored that the U.S. will support the peace process with a robust and regional diplomatic effort, which will aim to help the two sides achieve a durable and just political settlement and permanent ceasefire.

“Mr. Sullivan also made clear the United States’ intention to review the February 2020 U.S.-Taliban agreement, including to assess whether the Taliban was living up to its commitments to cut ties with terrorist groups, to reduce violence in Afghanistan, and to engage in meaningful negotiations with the Afghan government and other stakeholders.”

On Jan. 28, U.S. Secretary of State Antony J. Blinken spoke with Ghani, highlighting “robust diplomatic support for the peace process,” a statement from Blinken’s office said. He said that “the United States is reviewing the February 2020 U.S.-Taliban agreement and whether the Taliban are living up to their commitments to cut ties with terrorist groups, to reduce violence in Afghanistan, and to engage in meaningful negotiations with the Afghan government and other stakeholders.”

About 500 civilians were killed and more than 1,050 were injured in terrorist attacks in December, according to Afghanistan’s Interior Ministry spokesperson Tariq Arian.

Mohib, the national security adviser, on Jan. 24 said that 600 Taliban fighters, who had been released as part of the U.S.-Taliban peace agreement, had rejoined the Taliban to plot attacks against government forces and civilians.

“Afghanistan used all its power to establish peace in the country and negotiate with the Taliban and has taken unprecedented steps,” he was quoted as saying in a tweet by the office of the National Security Council. “But the Taliban have destabilized the peace process by setting up checkpoints along the way. A few people rob and take money from them. Many of our compatriots who spoke for the people and the land were martyred.”

Under the U.S.-Taliban agreement, the Afghanistan government released more than 5,000 Taliban prisoners and, in exchange, 1,000 security personnel detained by the Taliban were freed. The swap led to the opening of peace negotiations between the Taliban and Afghanistan.

In return, the Taliban pledged to negotiate a political power-sharing deal with Afghan rivals that would end years of hostilities in the country. The group has also given assurances it will stop al-Qaeda and other international terrorist groups from using Afghan soil for attacks against the U.S. and its allies.

The agreement also reduced the number of American troops in the country from more than 12,000 a year ago to about 2,500, there has been no reduction in violence. Under the agreement, all American soldiers are supposed to leave Afghanistan by April.

The power-sharing agreement, however, has been a major sticking point. On Jan. 7, Ghani rejected any possibility of an interim government. The Voice of America reported that the Taliban see Ghani as an obstacle to peace.

Above all, the Taliban want to keep the February 2020 agreement with the U.S. intact, said Pakistan political analyst Muhammad Amir Rana.

“The Taliban are stressing the need for the U.S. to stick to the peace deal,” Rana said. “They are meeting diplomats to hammer the point that the agreement is implemented as it is.”

Taliban spokesman Muhammad Naeem tweeted on Jan. 16: “Undoubtedly, the implementation of the agreement between the Islamic Emirate [the Taliban] and the United States is in the interest of both countries and both nations.”