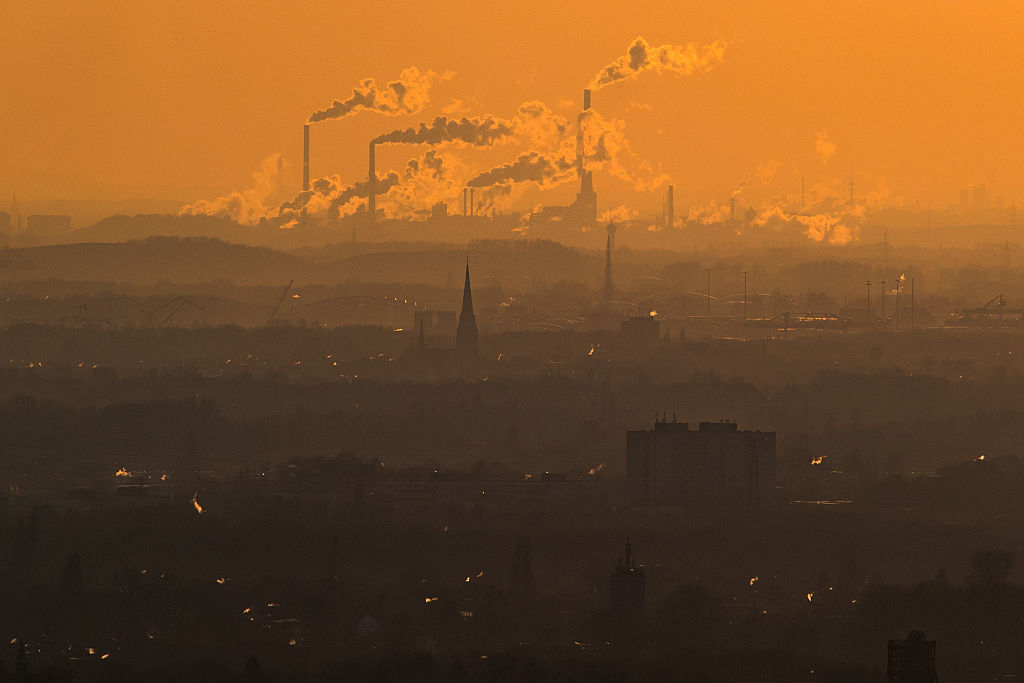 Steam and exhaust rise from different companies on a cold winter day on January 6, 2017 in Oberhausen, Germany. According to a report released by the European Copernicus Climate Change Service, 2016 is likely to have been the hottest year since global temperatures were recorded in the 19th century. According to the report the average global surface temperature was 14.8 degrees Celsius, which is 1.3 degrees higher than estimates for before the Industrial Revolution. Greenhouse gases are among the chief causes of global warming and climates change. (Photo by Lukas Schulze/Getty Images)

Greenhouse gas emissions in the United States are on track for the largest reduction on record, according to a new study.

An analysis by the research firm BloombergNEF estimated that greenhouse gas emissions in 2020 will be 9 percent lower than in 2019, which is the biggest yearly drop to date. The unexpected decrease is largely due to a stunted transportation sector at the hands of the COVID-19 pandemic.

U.S. greenhouse gas emissions have been decreasing since 2008 as the energy sector shifts from coal dependency to natural gas and renewable energy. BloombergNEF had previously expected a 1 percent decrease in emissions from 2019 to 2020, indicating that the remaining 8 percent was due to changes in human activity during the pandemic.

Burning fossil fuels is the most significant human activity that contributes to greenhouse gas emissions. The largest share of emissions comes from the transportation sector, as fossil fuels are burned for nearly every mode of transport, including cars, trains and planes. From 1990 to 2018, greenhouse gas emissions from the transportation sector rose 23.3 percent, according to the Environmental Protection Agency. The remaining emissions are the result of fossil fuel production for energy and electricity, as well as for agricultural and residential purposes.

The Carbon Disclosure Project, a nonprofit global emissions discourse organization, found that more than 70 percent of the world’s human emitted greenhouse gases since 1988 can be traced to just 100 companies in their Carbon Majors Report. An acceleration in extracting fossil fuels has doubled their impact on global warming. More greenhouse gases have been emitted since 1988 than were emitted in the 228 years between the start of the Industrial Revolution and 1988. The report’s findings indicate that corporations are the most responsible for climate change. ExxonMobil Corp, Shell, BP and Chevron Corp. are among the highest greenhouse gas emitting companies, according to the report.

“The scale of historical emissions associated with these producers is large enough to have contributed significantly to climate change. It follows that the actions of these producers over the medium-long term can, and should, play a pivotal role in the global energy transition,” the Carbon Majors Report says.

The dramatic increase in greenhouse gas emissions since 1988 is a cause for concern among modern environmental scholars. “The concentration of greenhouse gases in the atmosphere is getting higher every year. A lot of those greenhouse gases have been emitted in the last several decades,” said Professor John Dernbach, director of the Environmental Law and Sustainability Center at Widener University’s Commonwealth Law School.

Daily vehicle travel dropped dramatically in April, when stay-at-home orders were most stringent. April 12th saw the lowest passenger vehicle miles traveled, at 60 percent below pre-pandemic predictions, according to datafrom the Department of Transportation’s Bureau of Transportation Statistics.

“The recent emission reductions are going to go away when we get a vaccine that is widely administered. That being said, I think it’s likely that you may not see a return to travel in a way that we had traveled before,” Dernbach said.

A study led by researchers at the University of Delaware, Columbia University and Penn State found that the air quality in April 2020 had not improved compared to previous years. The study assessed air quality by tracking nitrogen dioxide, which is emitted by fuel combustion in vehicles, and fine particulate matter, which is mostly produced by coal power plants. Nitrogen dioxide levels were found to be 65 percent lower than previous data, but particulate matter levels were relatively the same.

“April 2020 was colder than average, and we guessed that the combination of people being at home more and the cold weather increased particulate matter emissions from residential energy consumption more than the reduction from traffic,” Cristina Archer, researcher and professor of physical ocean science and engineering at the University of Delaware, told Zenger News.

The Paris Climate Agreementis a voluntary global pact that requires each involved country to put forth self-imposed limits on greenhouse gas emissions. If global emissions were reduced by 7.6 percent every year between 2020 and 2030, the agreement’s goal of limiting global temperature rise to 1.5 degrees C would be met.  The pact encourages world leaders to lead by example and take responsibility in reducing global warming, as well as assist developing countries in forming greener production practices.

President Donald Trump announced his intent to withdraw the U.S. from the Paris Agreement five months after taking office, saying that the agreement would “undermine the U.S. economy.” The president said this action was in accordance with his “America First” policy. The U.S. formally withdrew from the agreement on the earliest possible date, the day after the 2020 presidential election.

The U.S. signed onto the agreement in 2016 via an executive order by former President Barack Obama. Of the 197 countries that signed onto the global effort to address climate change, 190 have ratified the agreement. The U.S. is the second largest global emitter of greenhouse gasesand the only country that has withdrawn from the Paris Agreement.

President Joe Biden signed an executive order reentering the U.S. into the Paris Agreement on his first day in office. The new administration will prioritize passing legislation that puts the country on track to achieve a 100 percent clean energy economy and zero emissions by 2050. Biden plans to invest $400 billion over the next 10 years for clean energy research and innovation, which is “the largest-ever investment in clean energy research and innovation,” his climate plan says.

“For the last four years, we’ve had a president who not only blocks climate action, but doesn’t believe in the science of climate change. And now we have a president elect, who’s committed to prioritizing that, and he has to make up for lost time. So we’re really looking at what kind of political leadership will help the transition off of fossil fuels, and to really bring the U.S. back on a global stage and into that leadership role,” said Ryan Schleeter, a spokesperson for Greenpeace.

The Biden administration will have to submit a report outlining its 2030 target emissions level before the next United Nations Climate Change Conference, which is set to take place in Glasgow, Scotland, in November 2021.