The Last Stop Before Tibet 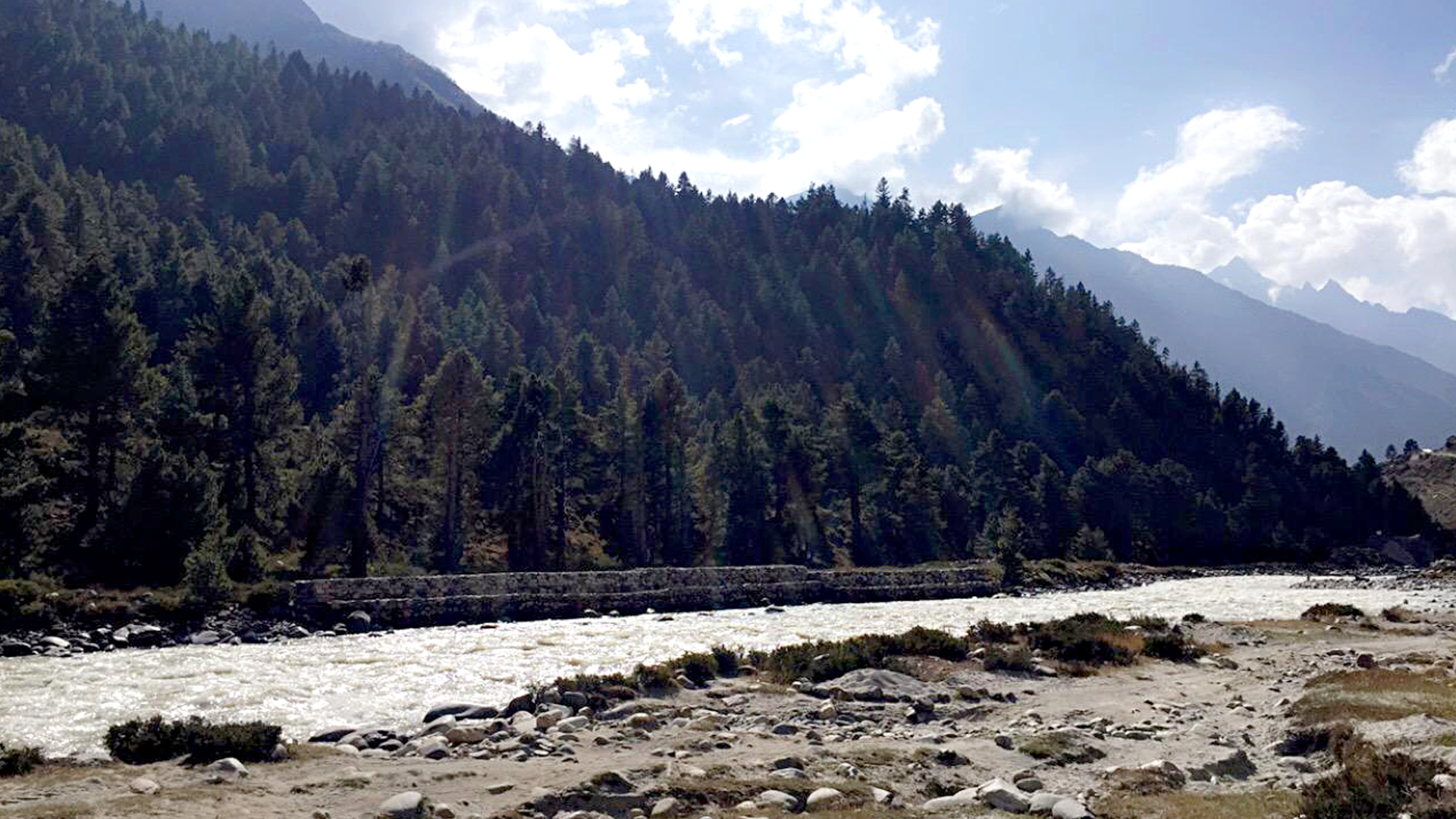 The trails in the village lead you to beautiful gushing streams. (Daksh Malhotra)

Chitkul, a village in the mountainous Kinnaur district of the northern state of Himachal Pradesh, does not have the usual “tourist spots” like other Indian hill towns. What it does have, however, is clean air, scenic views and a unique four-story wooden fort.

This picturesque hamlet of just 582 people, nestled between the Himalayan mountains on three sides and a river flowing down between the peaks, is a big draw for travelers looking for an off-the-grid experience.

Nayan Thakur, owner of Travellers Homestay in Chitkul, told Zenger News that May to July is the peak tourist season in the village.

“We see 200-250 guests coming in every week during summer, sometimes even more,” said Thakur. “But since there aren’t many places to stay in the village, people generally book hotels on the Sangla road.”

Sangla is a town in Kinnaur district that is an hour away from Chitkul.

Thakur said the consistent increase in the number of tourists coming to the village is helping the local home stay and hotel business.

“More locals are trying to offer home stay experiences because of the increase in demand during the summers,” said Thakur.

While Chitkul is abundant in natural beauty, it lacks basic infrastructure. The people of the village have learnt to live in adverse conditions with poor roads and an intermittent power supply.

Due to its rugged terrain, the region remained isolated from the outside world for centuries and it is only in the last few decades that it became accessible to outsiders.

The local culture and language of the region are highly influenced by Tibet with which Kinnaur district shares a border.

Chitkul is the last village in India before the Chinese border and the majority of the people here are Hindus.

“The best way to explore the village is by taking the small stone pathways that crisscross it,” said Abhigya Chauhan, an IT professional based in Chandigarh in India.

Chauhan visited Chitkul in August 2020, after the travel restrictions were relaxed in Himachal Pradesh. She decided to walk for 7 kilometers uphill from the Sangla valley to take in the scenic view and breathe in clean air.

“If you can keep a steady pace and have sturdy shoes, the walk uphill is not very difficult. The roads are narrow but it makes for a good trek.”

Chauhan mentions passing by apple orchards and lands where farmers still use yaks (a hairy Himalayan bovine) to plow the field.

“Chitkul is a cluster of small wooden houses connected by narrow footpaths,” says Chauhan. “Some trails are made of concrete or stone, while a few of them are mud and grass dirt tracks, just wide enough for one person to walk at a time.”

Towering over the small village, about 2 kilometers away, is the famous Kamru fort, which is known for its unusual architecture. The fort is a four-story building made of stones and wood. It has a distinctive wooden balcony and a timber terrace decorated with carvings of the Hindu deity Kamakhya Devi.

The idol of Kamakhya Devi is kept in the topmost story — the smallest — of the fort. According to the folklore of Kinnaur, the idol was brought 500 years ago from Guwahati, the city of Assam, a state in the Northeastern region of India.

“Himachal Pradesh is called Devbhoomi, which means the land of Gods; every village in the state has its own deities,” said Dr. Narendra Sharma, head of the history department at Himachal Pradesh University.

“According to legend, the fort of Kamru was built by Lord Badrinath (another name of the Hindu deity Vishnu) thousands of years ago. Inside the fort are many gods and goddesses all of whom have different powers and significance for the people,” said Sharma.

“The deity, which is believed to look after Kinnaur is believed to be the most powerful one among all local gods and goddess in Himachal Pradesh,” said Sharma

“Surviving in an inaccessible region that is under snow for the most of the year is extremely difficult. The locals have immense faith in their gods and it helps them cope with their hardships,” said Sharma.

“You have to wear a cap and belt with very distinct embroidery when you enter the Kamru fort to honor the deity of the region,” said Chauhan.

Chitkul remains snow-covered for the better part of the year. The road leading to the village remains closed from November to March because of heavy snowfall. During the monsoon season from end-June to August, the area is prone to landslides. Weather in the area is very uncertain, and even in summers, a sudden shower can trigger winter-like cold conditions.

“I went to Chitkul in June during the peak of summer, but the temperature never exceeded 50 degrees Fahrenheit,” said Daksh Malhotra, a management professional based in Gurgaon.

Malhotra says that the people running the homestays offer the best advice on how to explore the village and also serve local cuisine, which includes rice wines and goat meat cooked with dry fruits.

“I was told to leave my phone behind and walk around the village. I took the advice and ended up in a lush apple orchard after an hour-long walk from my home stay. The temperature, fresh air, the bright sun, and no disturbance from the real world made it an experience I will never forget.

“The people of the village don’t like to talk to outsiders at first. They might seem a bit rude but I realized soon enough that they are not used to the crowds of tourists visiting them.”

“They are also unfamiliar with any language other than their own. But the young people and the children are very welcoming.”

However, if you are planning your next trip to this picturesque town, be warned that the Kinnaur highway is one of the scariest and most accident-prone in India! It is closed from October to April due to heavy snowfall.

Chitkul is an eight-hour drive from Shimla, the state capital of Himachal Pradesh. There is a direct flight that connects Shimla to Delhi. You can either take the local government transportation buses once you reach Shimla or book a taxi online or at the bus stand in Shimla.

The bus will first take you to Narkanda, a small town two hours away from Shimla. From Narkanda you will have to take a connecting bus to Chitkul. Taking a private vehicle for the journey is not recommended due to the difficult terrain.