Popcorn With Zenger: Netflix’s ‘Outside The Wire’ Is Both Ambitious And Formulaic

The military sci-fi film has exciting stunt choreography but doesn’t make good use of all its characters. 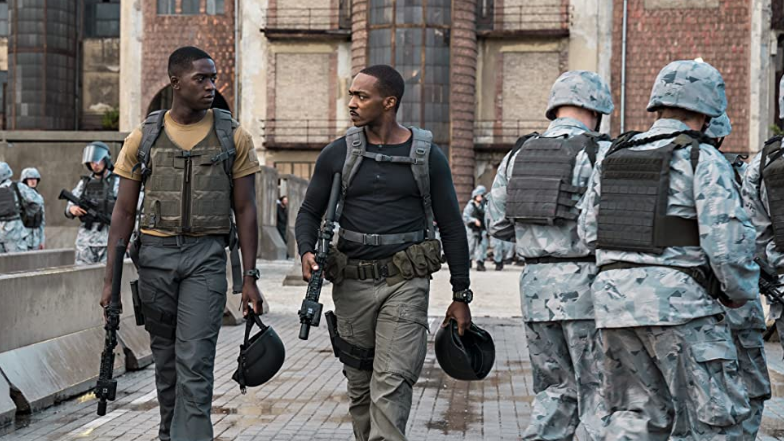 Damson Idris, left, and Anthony Mackie star in “Outside the Wire” on Netflix. (Courtesy of Netflix)

This question is often repeated in Netflix’s newest sci-fi film, but in the game of geopolitical war, can anyone be trusted?

A story about military distrust in the future battleground of a Cold War-era setting is a solid premise for a mid-budget thriller. Netflix, however, tries to take this premise a step further by adding a taste of sci-fi into the mix.

“Outside The Wire” is the latest Netflix original film and the streaming platform’s first major release of 2021. While Netflix has been spared the theatrical delays that cost Hollywood billions of dollars in 2020, its output hasn’t fared any better in terms of quality. Quantity over quality has been the game plan for the service trying to hold on to its title as the king of streaming. After losing over a billion hours worth of content due to rivals including Disney and Warner Bros. getting into the game, Netflix is throwing the kitchen sink to hold audience interest.

The Story: Set 25 years in the future, war is still the law of the land despite major advancements in robotic technology, and the conflicts are just as heated as ever. U.S. Marine drone pilot Lt. Thomas Harp (Damson Idris) defies a direct order by deploying a Hellfire missile in a drone strike during a battle. His action kills two Marines but saves 38 others. Instead of getting court-martialed, Harp is sent to work with Capt. Leo (Anthony Mackie), who to Harp’s surprise is secretly an advanced android super-soldier pretending to be an officer to complete his true mission.

Harp finds himself in the middle of an international conflict that puts lives and the future of several nations at risk. The problem is, Harp is trapped between three different factions and doesn’t know if he can trust any of them.

Bright Spots: “Outside The Wire” is bold in finding a new angle in the arena of sci-fi futuristic thrillers. War never changes, and “Outside The Wire” builds a world that is both contemporary and futuristic by blending modern soldiers with robots that would give Skynet a run for its money. The effects are pretty solid for a Netflix film that has to work harder than its theatrical counterparts to hide its budget.

The strongest performance is from lead actor Anthony Mackie. In a film that draws parallels to last year’s “Extraction,” starring fellow Marvel alum Chris Hemsworth, Mackie is just as strong a lead but is no superhero here. As Capt. Leo, Mackie is a cold-blooded cyborg programmed to remove humanity from his decision, making him the perfect soldier. The character blurs the lines between heel and babyface but provides all the best brutality the film has to offer, thanks to some brilliant stunt choreography. But the film’s ambition hurt the final product.

Weak Spots: One of the most notable trends in recent Netflix movies is pairing an actor with limited experience with a big-time star in an effort to get the most bang for its buck. So far, this experiment has hurt quality because putting a novice on the same project as a well-trained actor kills the chemistry.

Damson Idris has a few years of experience acting in major films, and the writing doesn’t do him any favors. His character was chosen as a scapegoat due to his history of questioning authority, but the film goes much further than that. Harp on multiple occasions bucks orders to the point that he would be court-martialed in realistic circumstances. As the film progresses his character is hardly important to the plot, as Mackie does all the heavy lifting in terms of the action while Idris stands in awe.

If the writing from Rob Yescombe and Rowan Athale were better, Idris’s character could have been removed from the film, creating a stronger narrative focused on Mackie’s Capt. Leo. Supporting characters such as Sofiya (Emily Beecham) never live up to their potential with little screen time.

The Takeaway: With such a limited cast, the film gives viewers some enjoyment but leaves them pondering what could have been. “Outside The Wire” falls into the trap of many Netflix originals: good enough to warrant a first viewing, but not strong enough to watch again.

See or Skip: Anthony Mackie makes this film a solid watch, but you will be left wanting more by the end credits.

«Previous Post
Popcorn With Zenger: ‘American Skin’ Presents Non-Fiction As Borderline Parody»Next Post
Daring To Be ‘Rita Moreno: Just A Girl Who Decided To Go For It’