Kashmir’s copper creators and the struggle to keep their centuries-old skills alive. 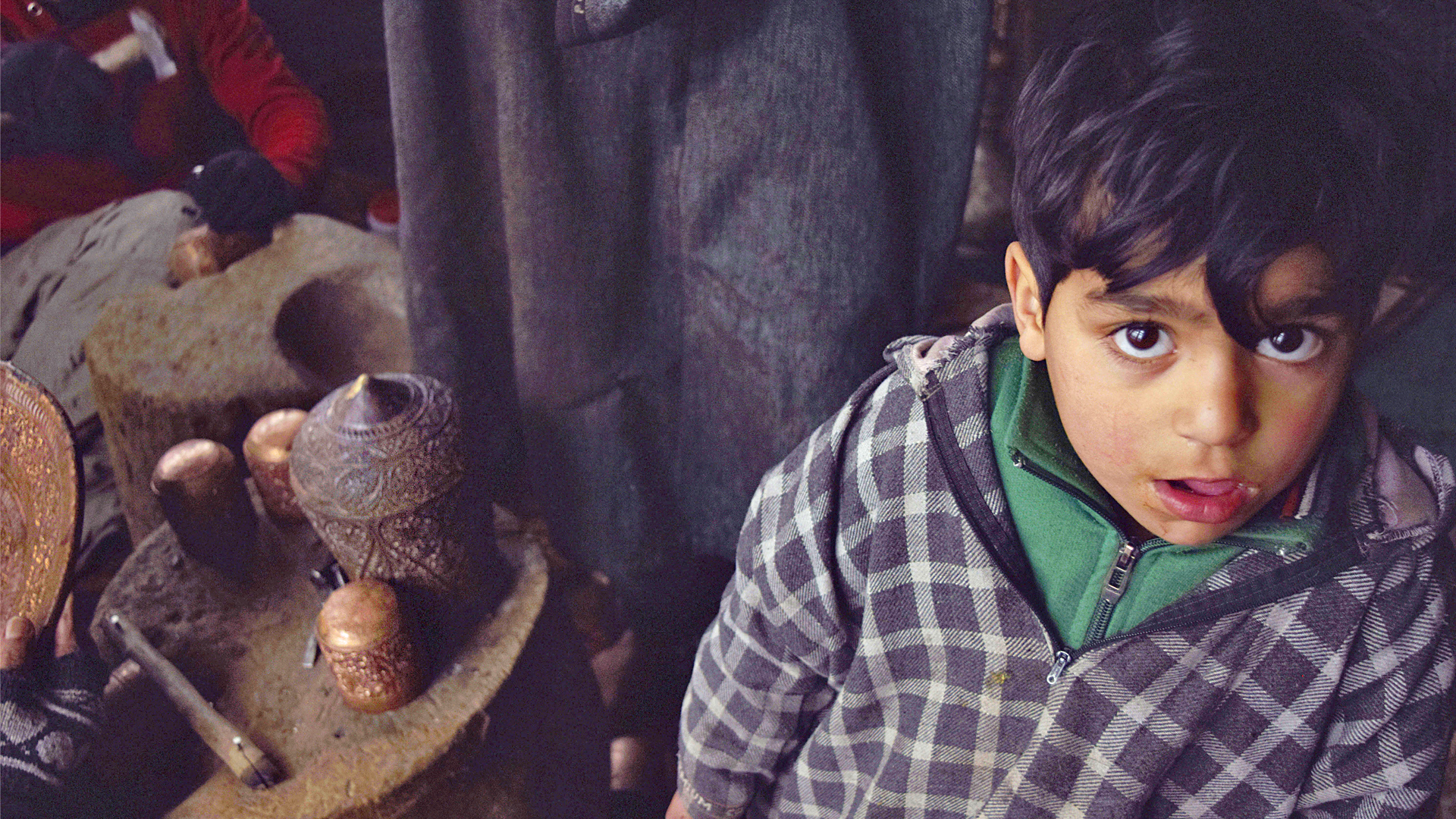 A boy at the copper ware workshop. (Ubaid Kana)

SRINAGAR, India — Shareef-ud-din Ahmed (68) beats a sheet of metal in a makeshift workshop in his courtyard in north Kashmir’s Kreeri village. He carves out motifs on the orange-red metal — often shifting the utensil in his hand from one side another. The symmetric imprints on the metal reveal the mastery he has over his craft.

For generations Ahmed’s family has molded and engraved copper into works of art; and despite difficulties vows to continue the legacy.

“I have survived on this craft and it has also fed my family, so even though profit margins may have dwindled, leaving this profession has never crossed my mind,” said Ahmed.

His sons, who work with him, reluctantly agree.

“We’re saddled with the burden of legacy. But we have to do this work. If we don’t, how will this craft survive?” asks Razaq, Ahmed’s son.

Ahmed softens the raw copper lump by placing it on a fire kiln.

After molding, the copper sheets are turned into various shapes and various floral and calligraphic motifs are embossed on the surface.  This is followed by polishing.

“Making of copper ware is a tedious process and a skillful work which involves many artisans who are specialized in smithy, engraving, gilding and polishing,” said Ahmed.

Ahmed proudly points towards the copper ware he has worked on. Among the artifacts, the samovar — an ornate kettle — stands out. Engraved with a special geometric and calligraphic motifs known as kandkari in local parlance, the finesse of the workmanship is clearly visible.

Besides samovars, Ahmed also makes other utensils like the tream (a large plate in which four people share food, usually in Kashmiri marriage ceremonies ), sarposh (a lid to cover the tream) and tash near (portable wash basin) can also be seen stacked over one another in a room of Mir’s house, which also doubles as a warehouse.

The use of exquisite traditional copper utensils have been part of Kashmir’s culture for a long time and the craft is widely believed to be brought to Kashmir by Persians some seven centuries ago. Revered Sufi saint Mir Syed Ali Hamdani who traveled from Central Asia on a missionary expedition to Kashmir is credited with bringing craftsmen from Persia to train locals in many crafts including copper making.

“Syed Ali Hamdani brought a skilled set of people with him who then trained Kashmiris in different crafts which included designing copper utensils,” said Zareef Ahmed Zareef, a prominent poet and historian from the valley.

The copper engraving workshops can now be seen throughout the valley, particularly in the old city of Srinagar, and many areas of the southern region of Anantnag and central Budgam district.

“We have a treasure of crafts here, which has helped us survive and create a name for ourselves in the international market,” said Yasin Khan, a copper trader from the region. “We may not have been earning in millions, but we were earning enough to sustain ourselves.”

“Unfortunately, we are now struggling to preserve these crafts. The newer generation is looking for easier options. The copper engraving or designing is an extremely tedious and intricate process. They would rather engage themselves in some office job even if it earns them less.”

With people using cheaper Chinese crockery and porcelain kitchenware, the demand for copper products has decreased over a period of time.

“The cost of a basic copper plate starts from Rs 500 (USD 7) and a motif engraved piece can cost as high as Rs 2500 whereas you can get an acrylic or ceramic plate for as low as Rs 70 (USD1),” said Manzoor Chopan, a copper utensil designer from Srinagar, who specializes in making samovars.

“So people prefer buying them over copper ware,” adds Chopan.

However, copper ware is still widely used by the local populace in weddings and other social ceremonies. But the metal’s durability and longevity means there is no brisk demand.

“Copper ware lasts for decades. Even a small copper bowl passes from one generation to another. So, it is difficult to generate demand for new copper ware,” said Ahmed.

Though the government has enacted the J&K Prohibition on Manufacture of Specified Copper Utensils Act, which states that no person shall engage himself in the manufacture of any specified copper utensils by machine, but Ahmed says the act is not implemented on ground. The act meant to safeguard “the manufacture of specified copper utensils by hand to protect the old-age craft from extinction” has not been able to stop production of machine made utensils, as per many craftsmen and traders.

“Machine made copper utensils are cheap though not as durable as handmade ones. But still customers prefer them because of low prices and that is badly affecting our trade,” Ahmed says.

The manufacture of copper utensils by use of machines also worries Chopan.

“On an average day, I used to earn Rs 1200, but the copper ware made by machines leads to distress sales of hand-made utensils. I can make a copper article per day, but how can I then compete in the market with a trader who makes a 100 items a day?”

(Ubaid Kana contributed to this report.)