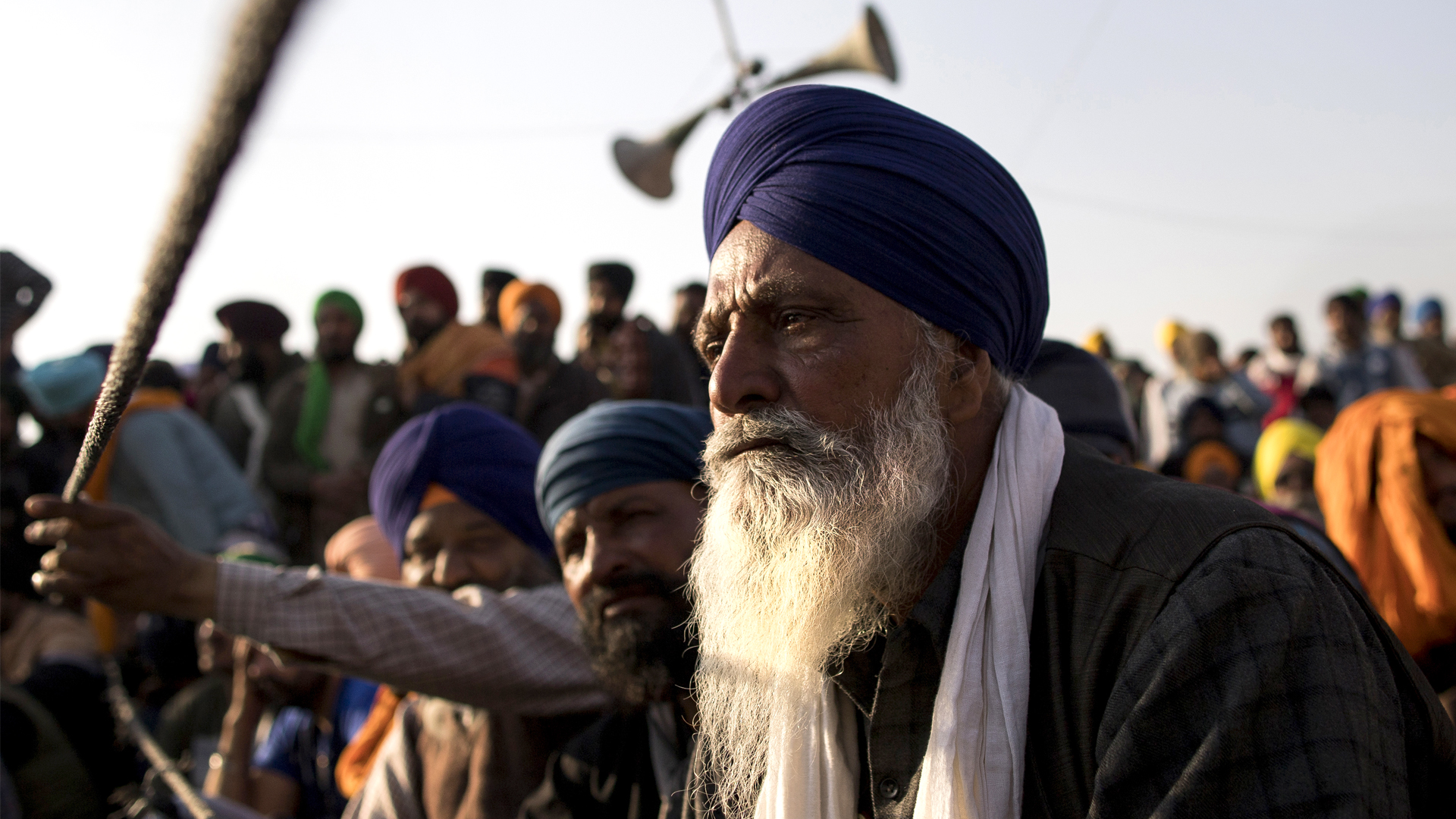 Farmers participate in a protest at the Delhi Singhu border in Delhi, India. (Anindito Mukherjee/Getty Images)

PUNE, India — Violence erupted, yet again, between protesting farmers and a group of men who identified themselves as “locals” on Jan 28 at Singhu, a village on the border of Indian capital New Delhi and neighboring state, Haryana.

Farmers have been camping at New Delhi borders since late-November, demanding the repeal of new farm laws that they claim will affect their livelihood. When the farmers entered New Delhi on Jan. 26 — India’s Republic Day — violence erupted, with protesters clashing with the police.

The situation in and around New Delhi has been tensed since then.

On Jan 28, one of the farmer leaders, Rakesh Tikait of the Bharatiya Kisan Union, claimed on TV that the government was plotting a conspiracy against the farmers and that he would rather die than get arrested.

Tikait has been booked by Delhi police for his alleged role in the Jan. 26 violence.

While the All India Kisan Sangharsh Coordination Committee, the major organizer of the protests, has withdrawn support from the agitation after the incidents of Jan. 26, other farmer unions have held their ground.

Thousands of them are camped at Singhu, where the protest site was allegedly breached by “locals” who reportedly vandalized the tents of the protesters.

“The protest is still going on,” Rajveer Singh Jadaun, state president, Uttar Pradesh, Bharatiya Kishan Union (another farmer union), told Zenger News. “We have decided to hold a mahapanchayat (congregation of many village local bodies) to decide our next strategy. Thousands of farmers have reached the site with tractors.”

“After that incident (Jan 26), many decided to stop protesting and were heading back home,” he said. “But after Tikait cried on national television, they came back and joined the protests. They (the farmers) felt it was genuine and decided to join the cause once again.” 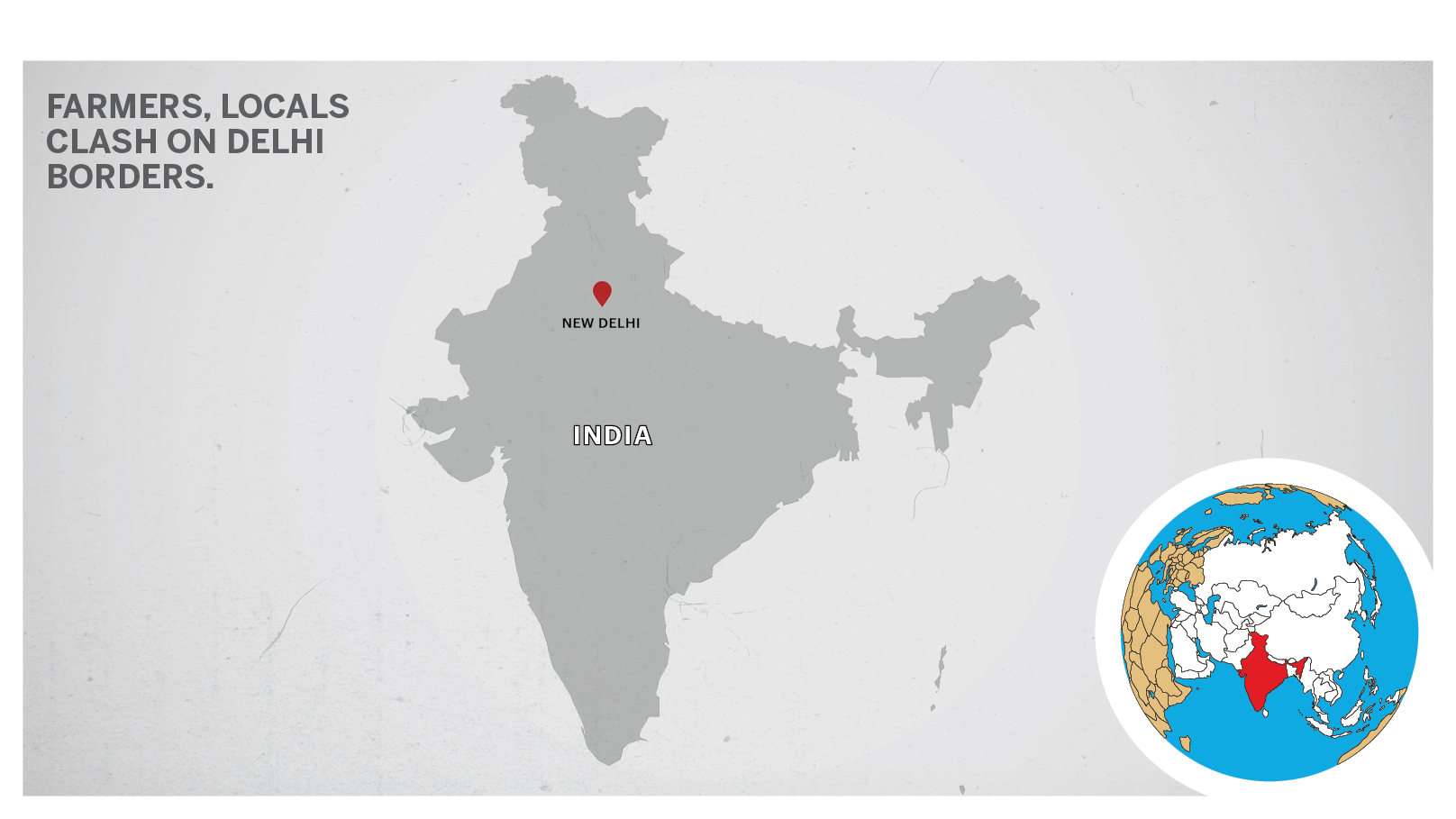 On Jan 28, farmers held a meeting in the Baghpat district of the northern state of Uttar Pradesh. They constituted a nine-member committee to decide on the ongoing movement.

They also claimed that the police and members of Prime Minister Narendra Modi’s Bharatiya Janata Party tried to evacuate the farmers from different protest sites on the intervening night of Jan 27 and Jan 28.

“Representatives from the Bharatiya Janta Party along with Delhi police tried to chase away the farmers after resorting to baton charge, while they were sleeping at the protest site, and dismantled their tents,” said Jadaun.

The police, however, denied any violence and claimed that the matter was resolved through peaceful negotiations.

“We removed farmers on the request of National Highways Authority of India, which wanted to resume work that was getting delayed due to this agitation,” Amit Kumar, additional district magistrate (Baghpat), told Zenger News. “There was no baton charge on that night, it was a peaceful negotiation between the protesters and the police. After talking to them (farmers), they agreed on returning and called an end to the protest. No farmers were arrested.”

Kumar said the police did not destroy the farmers’ goods and tents. Since they agreed to go back, they decided to clear congestion in the protest site.

Internet connection was suspended in and around the protest sites near the borders of the national capital, and some parts of the northern state of Haryana.

«Previous Post
Bling In The Sky: Pakistani Pilots Catch Sight Of Bright, Shiny Object»Next Post
‘The White Tiger’: The Anger And Agony At The Heart of The Netflix Drama