Bill Pulte spent more than $1 million making giving go viral. Now he wants imitators who will put their money where his mouth is. 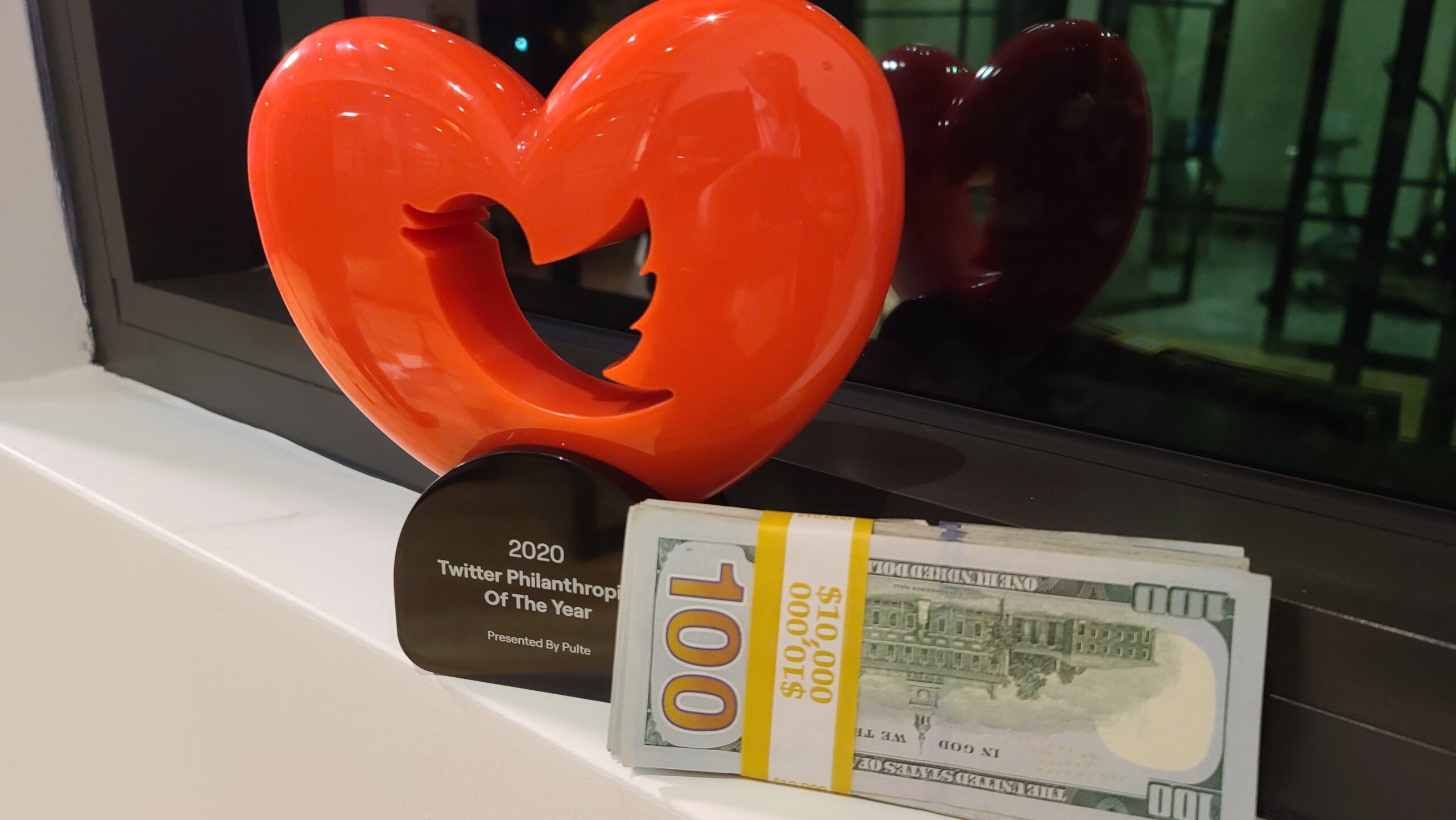 The first "Twitter Philanthropist of the Year" award went to YouTuber "MrBeast" along with $10,000, which he is required to give away. (David Martosko/Zenger News)

BOCA RATON, Fla. — On a humid day about 3 million Twitter followers ago, Bill Pulte tapped on his trackpad and gave $10,000 to a total stranger. With a net worth well over $50 million, the Florida investor could afford it, even if his wife’s jaw hit the floor when he told her a few hours later what he had done. Publicly lightening his wallet every day became “kind of an addiction,” he says.

Just 18 months later, the 32-year-old has poured out more than $1 million to people in need among the hordes who follow him on Twitter and Instagram. “I said, ‘Why not just pump out a tweet and see if people would be interested in taking my money?’” Pulte told Zenger News at his private equity firm’s south Florida office. “This was a crazy concept when I first started, right? People thought it was crazy. Some of my friends said to me, ‘Bill, was your account hacked?’ I said, ‘No, I’m actually giving away money.’”

Some of Pulte’s social media giveaways are $20 or $100 to followers and retweeters chosen from an endless stream of requests. Others have taken the form of new automobiles, with a livestream rolling when he hands over the keys. “You have to show it,” he told Zenger, explaining that he wants dozens and then hundreds of other people to become virtual franchisees, putting their money where his mouth is.

“I’m just one millionaire,” says Pulte, holding a heart-shaped statuette in one hand and an inch-thick mini-brick of banknotes in the other.

The trophy, his “Twitter Philanthropist of the Year” award, is one of four sitting on his desk in a modest and modern-looking building full of right angles in Boca Raton. Pulte, whose grandfather founded America’s second-largest home-building company, put it on the site of a ramshackle lawnmower repair shop that still appears on Google Street View. The four prizes are identical except for the years, covering 2019 through 2022. “Yeah, we’re going to keep this going,” he says, “and the 2019 trophy we’ll give out too.”

His wad of money is one hundred $100 bills in a bank wrapper that leaves no doubt about the total. He will sweeten the pot with the money when he announces the winner, the result of a public Twitter poll pitting three finalists against each other. Pulte will part with the trophy. The winner must part with the cash by giving it away.

“This is actually $10,000. Can you see that?” he says into a smartphone camera mounted on a tripod, flipping through the paper money like a Texas hold ’em dealer with a pack of cards. “I’m not full of shit, I promise.”

Pulte would give another $1,400 to a dozen of his Twitter followers during the livestream, reading their tweets aloud and promising to drop a Ben Franklin or two into their Cash App accounts. “I’m going to be giving away some of my money here,” he announces, “because why not?” Along the way he singles out a single father of six, a woman trying to help her disabled mother and a man recovering from back surgery who tweets to Pulte that he “can’t work because I can’t walk.”

Are they posing as hard-luck cases for a handout? Pulte is hyper-aware that the Internet is full of fakers hiding behind laptops and smartphones, but says it’s just a sliver of the people who hit him up for money.

“If I can help 90 percent of the people, and 10 percent of the people are scams? You know what? That’s 90 percent of people that wouldn’t be helped otherwise,” he tells Zenger, before taking a veiled shot at old-school grantmaking foundations that his approach to philanthropy could someday replace. “And you know what? Who’s to say that’s not going on in the charity industry, with these fancy balls and all this overhead? I mean, you know, we don’t really know where all this money is going, right? So at least when I give money to somebody who says they’re dying of cancer on Twitter, there’s probably a chance they’re dying of cancer.”

Pulte estimates that he spends 70 percent of his time making money and the other 30 percent giving it away. It’s dozens of hours every month, scrolling through depressing stories and trying to separate the worthy from the creeps. “It’s very difficult to see the suffering that goes on in people’s lives, all day, every day,” he says, but “what I try to do is use my BS detector.”

He keeps an eye on the rolling audience number during his livestream. More than 150,000 would see it by the following morning as word spread and people watched the replay, but it unfolded in real time for about half of them. “Wow. 75,000 people. That’s two football stadiums,” Pulte said afterward. “Taylor Swift had 35,000 at Soldier Field. That’s two Soldier Fields.”

Jimmy Donaldson, “MrBeast” to his millions of YouTube fans, won the award for his habit of giving away his wealth nearly as fast as he makes it. He made a rare appearance outside his own videos to boost Pulte’s street cred, telling the Thursday-night livestream audience about a food bank that he restocked just for fun.

“I did a YouTube video where I bought everything in 5 stores, so I have five stores worth of food,” says Donaldson. “So we basically are stepping in, and in ten days we’re going to do a big drive and feed everybody in the community, because that food pantry ran out of funds.”

Donaldson, 22, will earn an eight-figure sum from YouTube ad revenue this year; he films expensive stunts but also invents ways to spend cash that confound the expectations placed on Gen Z. “Do you need 12 cars? Do you need 12 houses?” he asks Pulte’s fans. “Personally, and maybe I’m weird, I just get more enjoyment helping other people than I do buying a bigger box to live in.”

Signing off, he says he would “love to give away a neighborhood” one day to people who don’t have a safe place to live and raise their children. “That would be so much fun,” he says.

Pulte and Donaldson teamed up last year to give away $100,000 to ten people in a single tweet.

Two runners-up survived a single-elimination tournament of Twitter polls. One In An ARMY, a leaderless group of fans obsessed with the Korean boy band BTS, crowdsources millions of dollars in donations for a different charity every month. And Dave Portnoy, the founder of Barstool Sports, has raised $32 million from his readers to help keep restaurants and other small businesses open despite Covid-19’s best efforts to bankrupt them.

Pulte’s family cuts a path through his eccentric relationship with money, starting with his billionaire grandfather who refused to fund his startup when he asked for money over dinner at McDonald’s. He calls that denial “one of the best gifts he could have ever given me, because he didn’t enable me.” His somewhat less wealthy father loaned him $575,000 to buy a company that repairs and replaces air conditioning units in commercial office buildings.

“I repaid it, and I repaid it with interest,” he says, “and I went on and I made well over $50 million myself.” He acknowledges that his family gave him a head-start, but says: “The money that I’ve been giving away has been 100 percent my money.”

Pulte’s wife, a biochemical engineer, quickly warmed up to his passion project, even though his first giveaway to a stranger didn’t sit well when he told her about it one night in bed. “She looked at me like I was — ‘What? You gave away $10,000 on Twitter? What do you — what are you talking about?’” he says.

Within two weeks he offered on Twitter to buy a car for a disabled veteran if then-President Donald J. Trump retweeted his pledge. Trump obliged him. “And there was this Daily Mail piece,” he says, “and then this thing just went viral.”

Pulte is big on calling his fans and celebrity boosters “teammates,” encouraging them to follow his lead on whatever scale they can afford, big or small. It might be a few dollars or a few million. “It’s been a team effort,” he says. “But those are pretty good team members to have, the President of the United States and MrBeast of YouTube. I mean, these are — these are some heavy hitters.”

Pulte says he hasn’t gotten tired of the electric charge that goes through his fingertip when he sends money to someone he will never meet, because he imagines the ripple effect. “It feels great to hit that button and know that it’s just going to virally go and inspire other people to give,” he tells Zenger.

I’m giving my money away LIVE to many of you and more! https://t.co/42AlYoEinK

He’s made what he calls “necessary” mistakes along the way, including getting sucked into Twitter fights and dishing out “tough love” to people who believe he’s offering a pandemic-afflicted public a series of cruel mirages to prop up his own ego.

“Now, I’m all about punching the trolls because, I mean, here we are — here I am, literally giving away my money, okay?” he says. “And people want to give us a hard time sometimes. And so sometimes you have to punch the trolls back.”

These fights, and the occasional stalker who can’t separate fact from fantasy, are an off-the-books cost for Pulte, Portnoy and Donaldson. But they all believe the Wild West online ecosystem is the perfect place to disrupt a complacent and stodgy “establishment” way to be helpful and kind. Sometimes it’s brutal, says Pulte, but the result is worth it.

“Finally we’re getting charity to go across the Internet.”

When the 25-minute livestream ends and the high-energy, chatty Pulte stops talking, the only voice in the room belongs to Rachael, his 20-something assistant who produced the event. She’s totaling up how much money her boss just gave away and whose Cash App accounts she needs to send it to. Pulte is glad he’s reaching a sea of disciples, but Rachael is beaming like a kid.

She was teaching first-grade in an impoverished public school when she spotted a bizarre phenomenon that her friends were retweeting: a man from a few freeway exits away, sharing his wealth. His focus for a few weeks was on teachers who paid for their students’ school supplies until their own money ran out. Under the rallying cry #fillthelist, teachers were making wish lists on Amazon and Bill Pulte’s fans were buying everything.

Rachael’s list was cleared in minutes, and she became an evangelist for the miracle in front of her.

“It’s insane,” says Pulte. “Every time I give away money — not every time, but almost every time — people will then take my money and give it away to other people. It’s the most bizarre thing in the entire world.”

He says people in need should solve the crises in front of them before they try to fix other people’s problems: “It’s like being on an airplane and having the oxygen mask come down. You’ve got to take care of yourself.”

“And these are people who are really suffering,” says Pulte, rattling off a list of what a microscopic Chinese virus has made ordinary. “I mean, these people are out of jobs, who need a hand up, who can’t pay their electric bill or are being foreclosed on. I mean, there is a real need for help out there.”