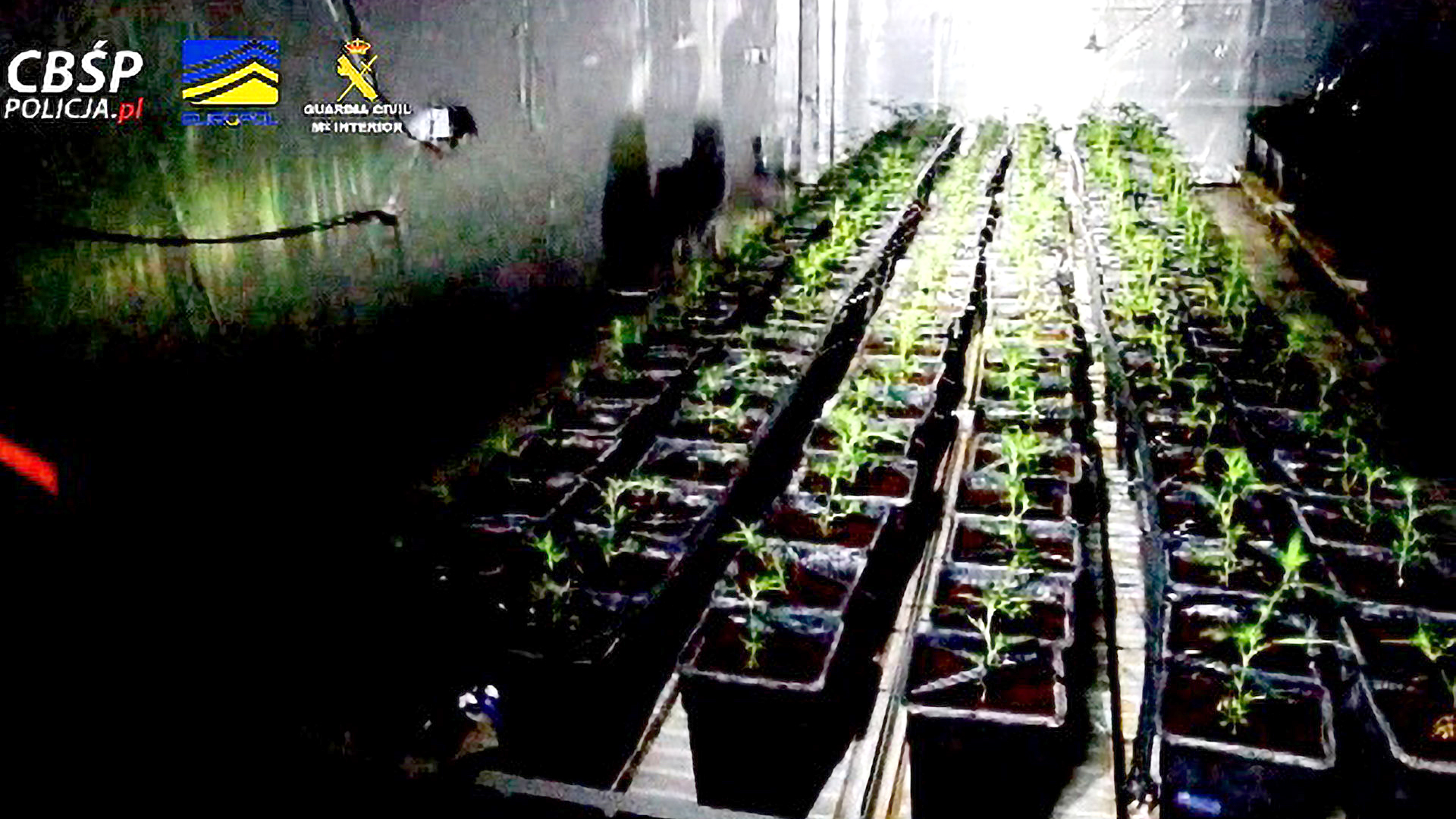 The cannabis seized during the drug bust. (Newsflash)

VALENCIA, Spain — The Spanish authorities have delivered another blow to one of Europe’s biggest cannabis trafficking networks, arresting 20 suspects and seizing 20,000 plants.

The large-scale operation, called ‘Mocy’, led investigators to the south-eastern Spanish community of Valencia, where authorities arrested 20 suspected drug traffickers, including a lieutenant of the network’s leader.

“The operation began in September 2019, when the Civil Guard became aware of an organization based in the province of Malaga, which could be transporting large quantities of marijuana, from Andalusia to Poland,” said Civil Guard of Seville in a statement.

“Continuing with the investigations, it was possible to detect the presence of leaders of a Polish organization residing in a luxury urbanization, located in Estepona (Malaga), who could be linked to international drug trafficking.”

In all, 19 suspects are of Bulgarian nationality while one is Spanish. The leader of the Valencia Branch is a Bulgarian national who ran a ‘grow-shop’ selling products related to growing cannabis plants, said police sources.

On his premises, in the town of l’Horta, officers seized 10,000 plants.

In total in Valencia, officers reportedly found 20,000 cannabis plants hidden in industrial warehouses and several chalets. In addition, they located a ton of cannabis buds, €300,000 ($363,070.80) in cash, and high-end vehicles.

The ongoing operation began in the southern Spanish region of Andalusia. The investigation has been coordinated with Europol and Eurojust and has resulted in a total of 110 arrests throughout Spain, said sources from the Civil Guard of Seville.

Agents have reportedly carried out over 80 searches throughout the country and in Poland, during which a ton and a half of cannabis and over 20,000 plants were seized, as well as 43 kilograms (95 lbs) of cocaine and 91 kilograms (201 lbs) of hashish.

“The operation has settled 110 people and has seized 1.5 tons of marijuana buds and more than 20,000 marijuana plants,” said Civil Guard of Seville in a statement. “Over 90 kilograms of hashish, 43 kilos of cocaine, more than half a million Euros in cash, eight firearms, eight trucks, a bus, 26 vehicles, and movable and immovable property valued at €5 million($6 million).”

According to local media, the organization was “strongly hierarchical”, with the presence of mafias from Poland, Bulgaria, Morocco, and Spain.

The criminal organization operates on an international scale, transporting marijuana and hashish produced in Spain to various countries.

The investigation was on when the reports last came in.

However, despite evidence showing the therapeutic use of cannabis, Spain has no specific regulations governing its therapeutic use. This is one of the demands included in most proposals for cannabis regulation.

“The Medicines Agency gave its approval for Sativex to be sold in Spain in 2010. Since then its use has been legal,” said Xabier Arana in his report “Instituto Vasco de Criminologia.” Although in practice, its use is restricted solely for alleviating symptoms in patients with moderate or serious spasticity due to multiple sclerosis who have not responded well to other medications.”