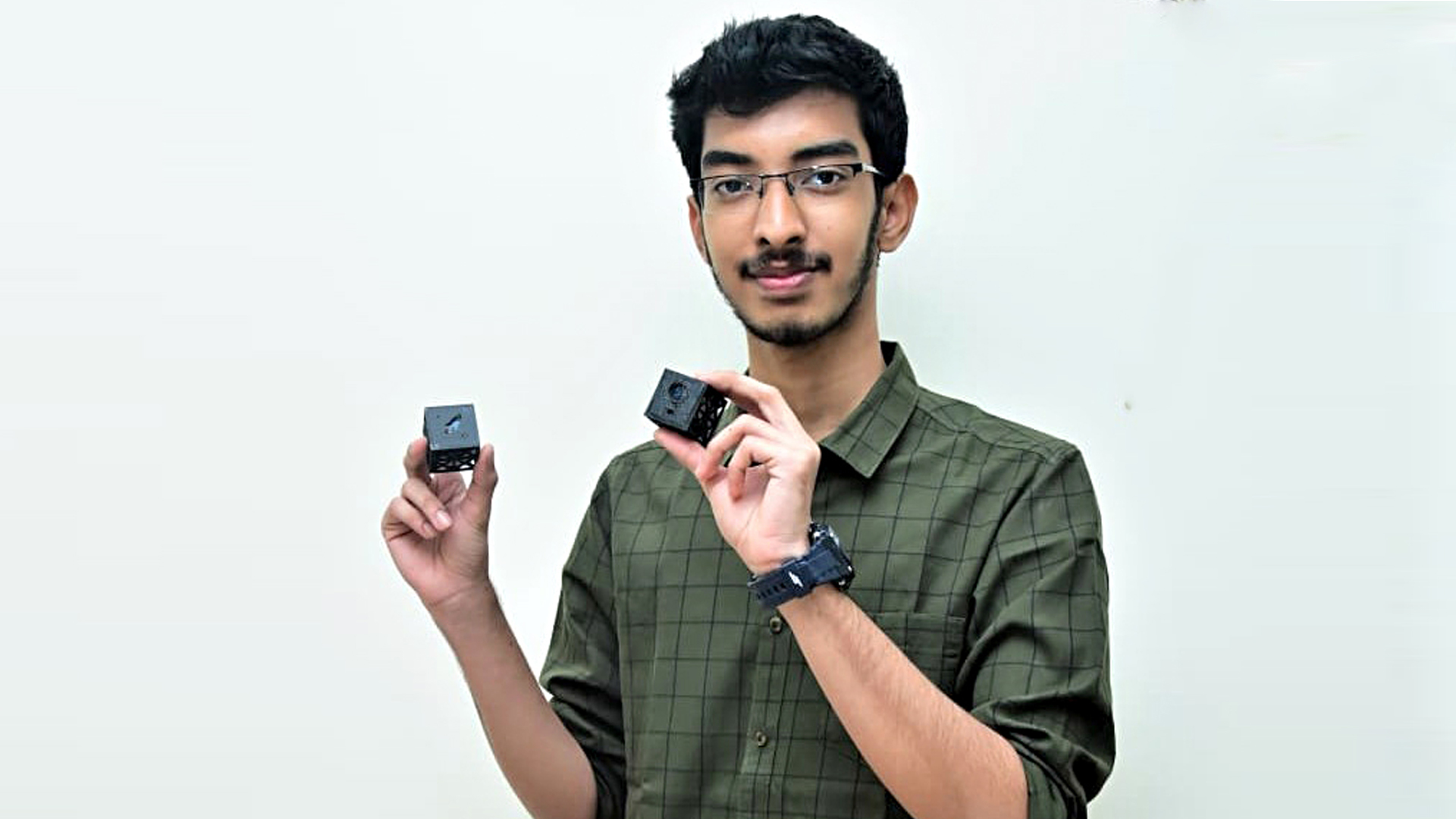 NEW DELHI  — A femto-satellite designed by an 18-year-old engineering student in India has been selected by NASA to be used in one of its space missions this year.

A femto-satellite is low cost, with a mass lower than 100 grams.

“Riyasdeen’s satellites are named VISION SAT v1 and VISION SAT v2. Both are 37 mm in size and each weighs only 33 gm., making them the world’s lightest femto-satellites,” said Shyam Sundar, Riyasdeen’s mentor. “Each of them has 11 sensors onboard that record 17 parameters, including radiations, gases, magnetic field, etc.

“The purpose of these satellites is atmospheric and space studies. They are very strong and have high thermal properties which can withstand all the space conditions,” said Sundar, who formerly worked at INRO Labs, where Riyasdeen started working during his second year of high school. The Chennai-based lab teaches the basics of robotics and artificial intelligence on various space-related projects, among other things.

Riyasdeen has been working on science projects since childhood. At school, he conducted experiments and took part in science exhibitions.

“It was at INRO Labs that I started going for events and science competitions, which were held at the national or international level. These events helped me get a lot of exposure. The competition level was very high in them. That’s how I got involved in big projects,” Riyasdeen told Zenger News.

While working at INRO Labs, Riyasdeen learned about the Cubes in Space competition. The contest is offered in collaboration with NASA’s Goddard Space Flight Center and Langley Research Center, and the Colorado Space Grant Consortium.

“I applied for the 2019-20 edition of the Cubes in Space competition when I was in the 12th grade. I started my research in the 11th grade and it took me almost one-and-a-half years to complete it,” said Riyasdeen, whose design was chosen from among those entered by participants from 73 countries.

Some of Riyasdeen’s other achievements include being a runner-up in the junior category at a world robotics championship sponsored by Technoxian in 2018; and being selected to participate in a robotics festival sponsored by  Robotex  in 2019.

Sastra  University has awarded Riyasdeen a $6,850 grant, which he intends to invest in his recently established startup, Spezar.

Since Riyasdeen’s satellites are part of a research project, there are no possibilities for monetizing them. He said the main achievement is that the project will be launched by NASA.

“VISION SAT v1 will be a part of SR-7 NASA Rocket Mission that is expected to be launched from [NASA’s] Wallops Flight Facility in June 2021, and VISION SAT v2 of the NASA Balloon Mission RB-6 scheduled for launch in August 2021,” he said.

Riyasdeen’s future plans involve industrial projects that he plans to introduce under the label of his startup in the next six to 12 months. One project involves a robot that could interact with people and perform as a personal assistant in banks and other companies.

The news of his satellites has reached several politicians in India, some of whom have tweeted about his accomplishments.

“People are expecting a lot more from me,” said Riyasdeen. “I should not stop working hard, and I hope that I will be able to bring out good innovations that have a positive impact on society.”

«Previous Post
‘The White Tiger’: The Anger And Agony At The Heart of The Netflix Drama»Next Post
Pondi-Cheri: The Indian Riviera That Will Always Be A Darling of France

VIDEO: Speeding Driver Crashes Into Parked Car With Three Kids Inside In Front Of Texas Cops

VIDEO: Life Is Cheep: Stunned Sparrow Brought Back From Death With Heart Massage

A Season Of Season Twos In Indian Streaming Platforms