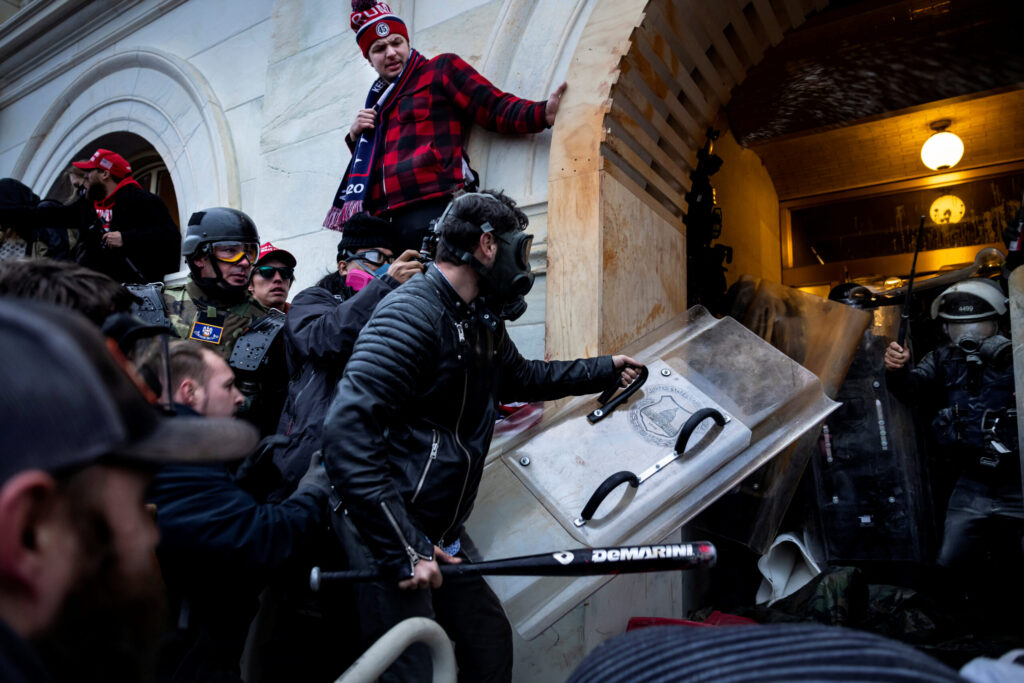 WASHINGTON — The Department of Justice is bringing sedition and conspiracy charges against paramilitary and militia group leaders, members and participants in the Jan. 6 Capitol insurrection.

Three people associated with the Oath Keepers, an extremist paramilitary organization that heavily recruits from military, law enforcement and first-responder personnel or veterans, were formally indicted for conspiring to obstruct Congress on Wednesday.

Jessica Marie Watkins, 38, and Donovan Ray Crowl, 50, of Ohio and Thomas Caldwell, 65, of Virginia face charges of “conspiracy, obstructing an official proceeding, destruction of government property, and unlawful entry on restricted building or grounds,” the Department of Justice said in a press release.

They are among the more than 125 people arrested in connection to the incident.

Authorities said they have clear evidence of the trio’s prior planning, including discussions about where to stay and how to work out the logistics of the uprising. Caldwell posted a message on New Year’s Eve stating: “THIS IS OUR CALL TO ACTION, FREINDS(sic)! SEE YOU ON THE 6TH IN WASHINGTON, D.C. ALONG WITH 2 MILLION OTHER LIKE-MINDED PATRIOTS.”

Watkins and Crowl also belong to the Ohio State Regular Militia, with Watkins claiming to be a commanding officer (C.O.) of the group in a social-media post. According to the indictment, many Ohio militia members “form a dues-paying subset of the Oath Keepers.”

They began plans as early as November 2020, according to the indictment. During the week of the presidential election, Watkins began inviting people for basic training run by a Marine drill sergeant at an undisclosed Ohio location.

She claimed they needed to get “fighting fit” in time for the inauguration.

All three defendants continued communicating and coordinating activity until Jan. 19. They later posted play-by-play social media updates of their activity and whereabouts at the Capitol building during the insurrection, such as when they breached the doors. They also posted photos of themselves “before forcing entry into the Capitol building.”

Other social-media messages the FBI retrieved from the co-conspirators’ accounts on that day were much darker in tone, including one regarding members of Congress.

“All members are in the tunnels under the capital,” said a message sent to Caldwell during the Capitol attack. “Seal them in [and] turn on gas.”

Among the few charged with conspiracy for civil disorder to date are Lisa Eisenhart and Eric Munchel of Tennessee. FBI arrest documents state that as Munchel and Eisenhart made their way to the Capitol, they encountered members of the Oath Keepers.

“There’s 65 more of us coming,” one of the Oath Keepers said.

When he recognized them, Munchel said in affirmation: “Oath Keepers,” and bumped fists with one of the men.

Ryan Nichols and Alex Harkrider of Texas faces charges of conspiracy and unlawful entry with a dangerous weapon, among others. Their arrest affidavit states that investigators pulled photo screenshots from their social media accounts verifying their presence at the riots, and showing Harkrider stating they were “planning a civil war.”

Another recent participant arrest includes Glen Falls, New York, man James Bonet, who reportedly posted a now-deleted social media video of himself smoking a joint inside the Capitol building during the insurrection.

The arrests come after large-scale criticism of a disproportionate response by law enforcement to the Capitol insurrectionists, many of whom were allowed to leave the scene en masse. Federal officials reiterated their determination to pursue investigations until conclusion.

Steven D’Antuono, assistant director in charge of the FBI’s Washington Field Office, asserted in a Jan. 26 press call that authorities are intent on “finding those who breached the Capitol, damaged the building, or stole government property. But we are also looking to find those who violently assaulted the law enforcement officers who were trying to protect the Capitol and prevent the disruption of our democratic process.”

FBI and Bureau of Alcohol, Tobacco, Firearms and Explosives officials are also still seeking information on a bombing suspect and are offering a $75,000 reward for information leading to the identification, arrest and prosecution of individual(s) responsible for the pipe bombs placed at the DNC and RNC locations on Jan. 6.