Aztec Carving Of Bird of Prey Unearthed IN Mexico

Huge symbol found at the sacrificial altar at a temple in the ancient center of Mexico City.
By Lisa-Maria Goertz January 29, 2021
Facebook
Twitter
Linkedin
Email 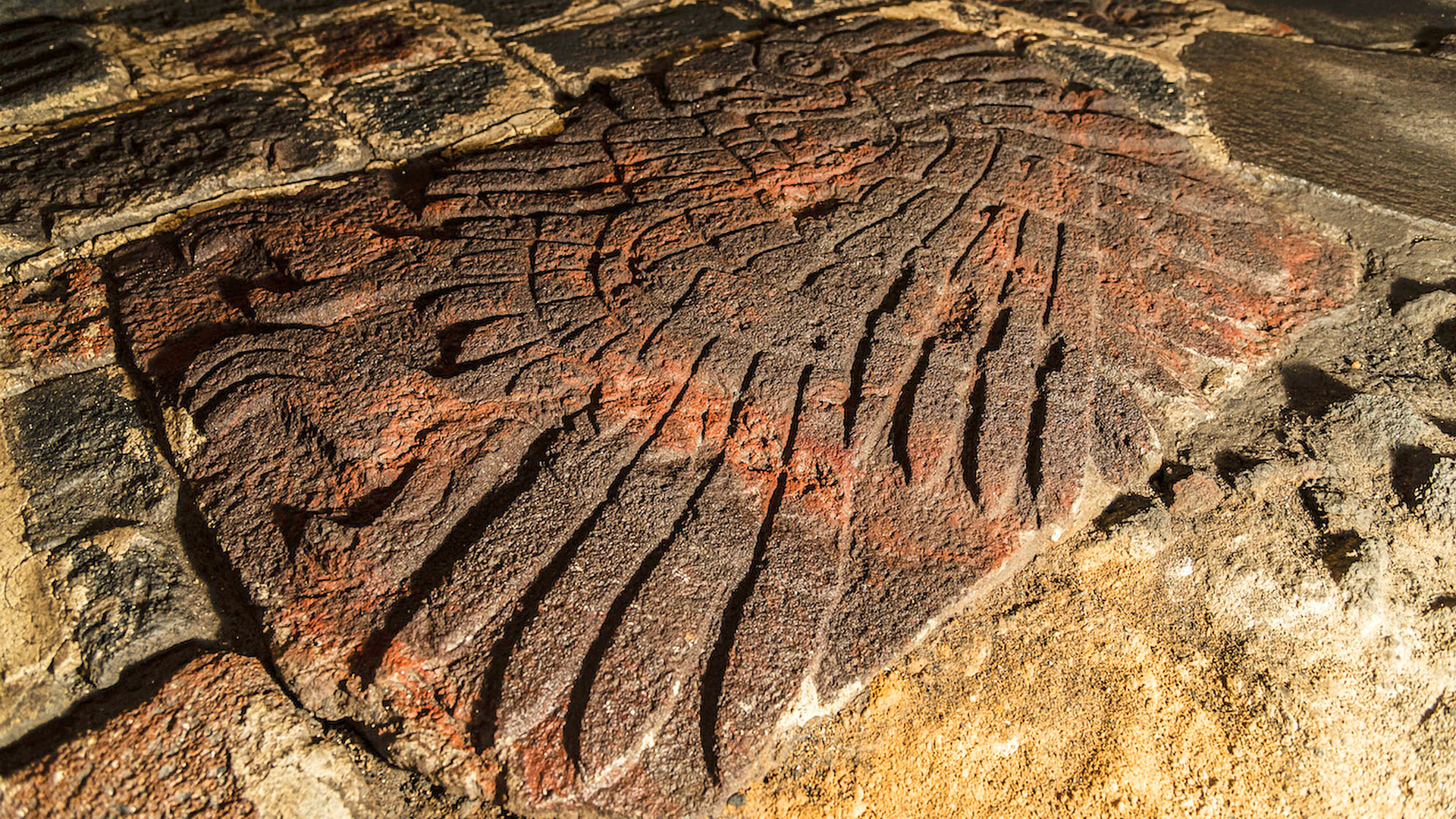 Researchers uncovered the eagle carved into red tezontle stone on a slab on the floor of the plaza dating back to the 15th century. (Mirsa Islas-INAH/Newsflash)

MEXICO CITY, Mexico – An ancient carving of an Aztec war god symbolized as an eagle has been unearthed in the capital of Mexico, Mexico City, on Jan 25.

“The royal eagle alludes to the sun, an animal that represents Huitzilopochtli, a deity who indicated the place where they should found Tenochtitlanz,” said Rodolfo Aguilar Tapia, an archeologist.

A team of archeologists from the Instituto Nacional de Antropologia e Historia announced the discovery of a bas-relief, a carving with an overall shallow depth, depicting an American golden eagle.

The large eagle was found at the foot of the Templo Mayor (main temple of the Aztec city of Tenochtitlan, present-day Mexico City) in the central axis that crosses the ‘chapel’ of Huitzilopochtli and the monumental sculpture of the goddess Coyolxauhqui.

Huitzilopochtli means “Blue Hummingbird on the Left” and he was the Aztec god of the Sun and the war who is often depicted as an eagle.

Researchers uncovered the eagle carved into red tezontle stone on a slab on the floor of the plaza dating back to the 15th century, during the reign of Aztec emperor Moctezuma Ilhuicamina, the second Aztec emperor, and fifth king of Tenochtitlan.

“This floor is unique in the entire Templo Mayor as it contains bas-reliefs that allude to the dual conception of the building,” said Instituto Nacional de Antropologia e Historia in a statement. “On the south side, we are exploring, there are elements like this eagle, linked to the mythical cycle of the birth of Huitzilopochtli.”

“While to the north, the bas-reliefs located earlier- the first in 1900 by Leopoldo Batres,” it said.

It is also positioned close to the Cuauhxicalco, a circular building whose name translates as “place of the eagle’s gourd”. The excavation was directed by archeologist Leonardo Lopez Lujan, who said that the site was also used for sacrifices.

He confirmed that the numerous references of eagles found in the excavations, as well as remains of eagle skeletons used as sacrificial offerings, reveal the importance of the bird in ancient Mexican culture.

“This image is iconographically very similar to the bas-relief that we found in the field,” said Tapia. “In both representations, the feathers end in the shape of sacrificial knives, which allude to the Nahua name of the bird: Obsidian eagle.”

“For the Mexica, this bird of prey had a close relationship with war and sacrifice,” he said. “It was considered a nahual of the sun, therefore, also of its tutelary god, Huitzilopochtli.”

This is reportedly the largest representation of an eagle ever discovered in Templo Mayor, measuring 1.06 meters (3.4 feet) long by 79 centimeters (2.6 feet) wide, making it the largest bas-relief of a group of 67 discovered.

“Its head stands out, where you can see the annular eye and a robust hook-shaped beak from which the tongue comes out,” said a researcher.

The relief was unearthed in February 2020, but the details of the discovery have been made public only now.