Police clash with protesters who entered New Delhi after camping on its borders for months.
By Gaurab Dasgupta January 28, 2021
Facebook
Twitter
Linkedin
Email

NEW DELHI  — For 72 years, since India became a constitutional republic in 1948, the Republic Day parade has been organized by the national government. Following a two-month-long civil siege of the capital Delhi by farmers protesting new farm laws, a precedent was set.

“I was on the tractor near the Karnal bypass, close to the Singhu border [between Delhi and neighboring state Haryana], when the police stopped us,” said Parwinder Singh, a farmer from Ambala, a city in the northern state of Punjab.

Parwinder was among hundreds of protestors and policemen who were injured in what turned out to be one of the most violent Republic Days in India’s history.

“They [the police] asked us to not go forward, but we had permission from the police” Singh continued. “When we started going ahead, they baton-charged us. I was injured as well. We had no other option but to retaliate.”

Having failed to dissuade the farmers from organizing their alternate rally, the Delhi Police had ordered them to stick to Delhi’s borders at Singhu, Tikri and Ghazipur — effectively keeping the rally outside the national capital. 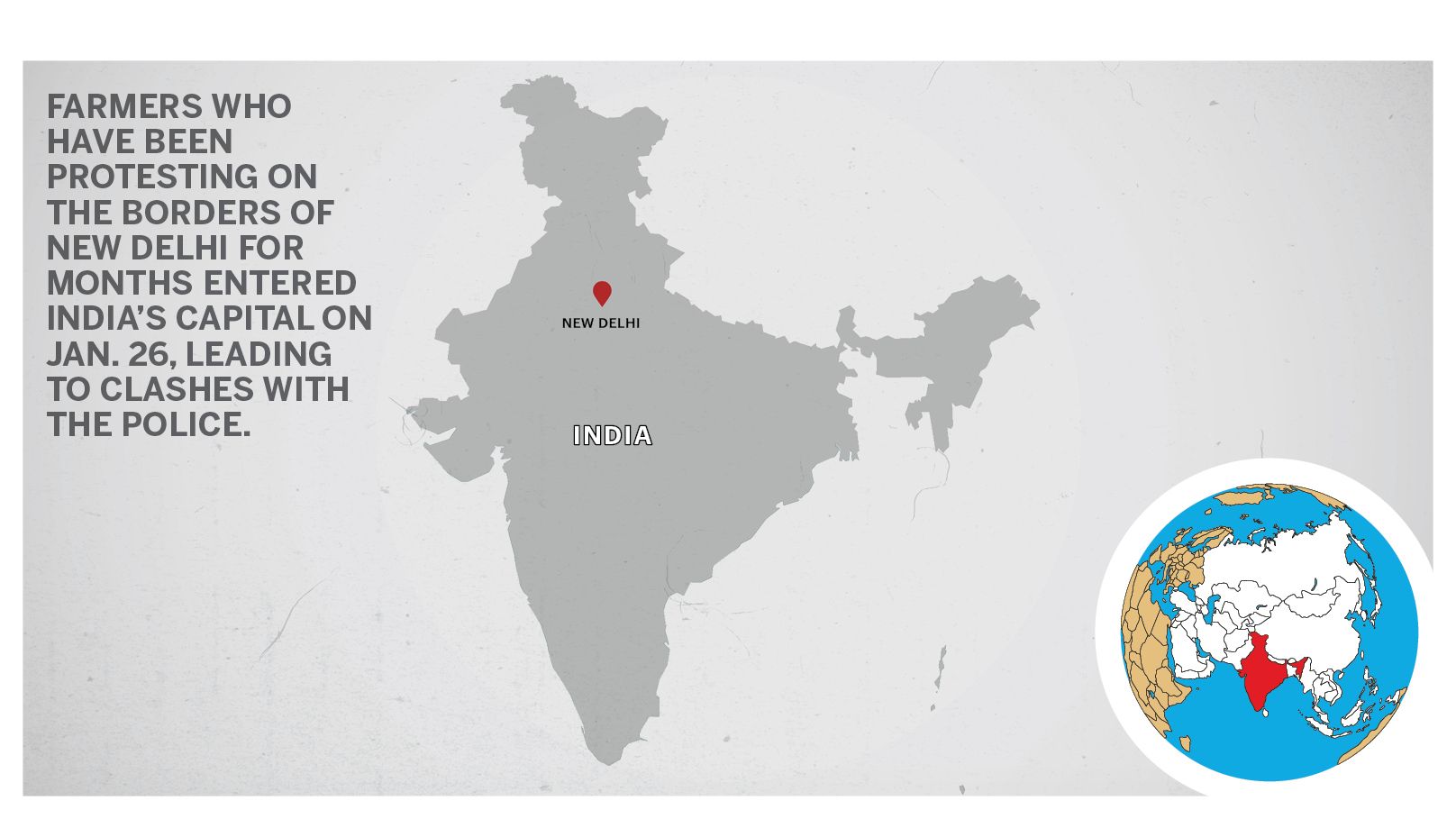 The time diktat was for 11:30 a.m. to avoid a clash with the official rally timings.

Defying both these orders, the farmers — some on foot while others on their tractors —breached the capital’s barricades at 8:00 a.m.

“The Delhi Police worked in accordance with what was decided with the farmers,” reads the official statement from the Delhi Police. “The farmers violated the norms and chose the path of violence. We had to take adequate measures to maintain the law-and-order situation in the capital. Many of our personnel were badly injured and there has been an immense loss to public property.”

A day later, on Jan 27, two farmer unions — the All India Kisan Sangharsh Coordination Committee and the Bharatiya Kisan Union — withdrew their support from the protest making their displeasure clear about the violence that erupted.

“The police had demarcated one particular route for us to carry out the tractor march,” said Manjeet Singh, a farmer from Bilaspur in the northern state of Uttar Pradesh. “When the crowd gathered on the route, a scuffle broke out between the police and the farmers. And the police fired teargas. The elder farmers began choking. And that’s when we decided to take another route to enter Delhi.”

Regular life in the national capital was thrown out of gear as several metro stations were shut and roads were barricaded, leading to massive traffic snarls.

“My wife and her family were traveling with me to Rudrapur [a city in the northern state of Uttarakhand] when we were told that the roads were blocked,” said Sanjay Palni, a resident of New Delhi. “We had to cancel our plans and return home.”

The agitating farmers clashed with the security personnel at ITO, a central gateway to the high security zones, including the president’s house, the parliament and the prime minister’s residence.

One of the farmers died at ITO after he was hit by a tear gas canister and his tractor overturned. As the clashes intensified, a large section of the farmers marched towards the Red Fort — the 17th-century fort from which India’s prime ministers deliver the Independence Day speech.

“What is this behavior by the police?” asked Bhagwant Singh, an elderly farmer injured in the clashes, as he stood in front of the Red Fort. “This is nothing but a dictatorship. Many people from our village have been injured, some have been even hit on the head.”

Scores of people stood witness as protestors hoisted the Nishan Sahib, a religious flag of the Sikh community, on the fort. The act brought a lot of criticism from different sections of society.

It was only after many hours of negotiations, the farmers vacated the premises of the fort and returned to the respective protest sites at the borders where they have camped since Nov 26, 2020.

Meanwhile, an emergency meeting was chaired by India’s Home Minister Amit Shah to assess the situation and the need for more paramilitary forces to secure the capital. Internet was also suspended in areas where violence had broken out.

Zenger News reached out to three members — Nalin Kohli, Sambit Patra, and GVL Narasimha Rao — of India’s ruling Bharatiya Janata Party, but none of them commented on the incident citing the “sensitivity” of the matter.

The rally on Jan 26 marks two months of the protests at the borders of the national capital despite the cold and rainy weather, demanding the repeal of three new farm laws passed in September 2020.

The government’s proposal to put the laws on hold was rejected on Jan. 21 during a general meeting of the Samyukt Kisan Morcha [Joint Farmers Front] union. After nine rounds of talks, the government had made the proposal on Jan. 20. The farmers had rejected the government’s decision and decided to go ahead with the rally.

Danish Pandit contributed to the story.