Burglar flees after being battered by his would-be victims in Brazilian robbery.
By Maja Mishevska January 28, 2021
Facebook
Twitter
Linkedin
Email 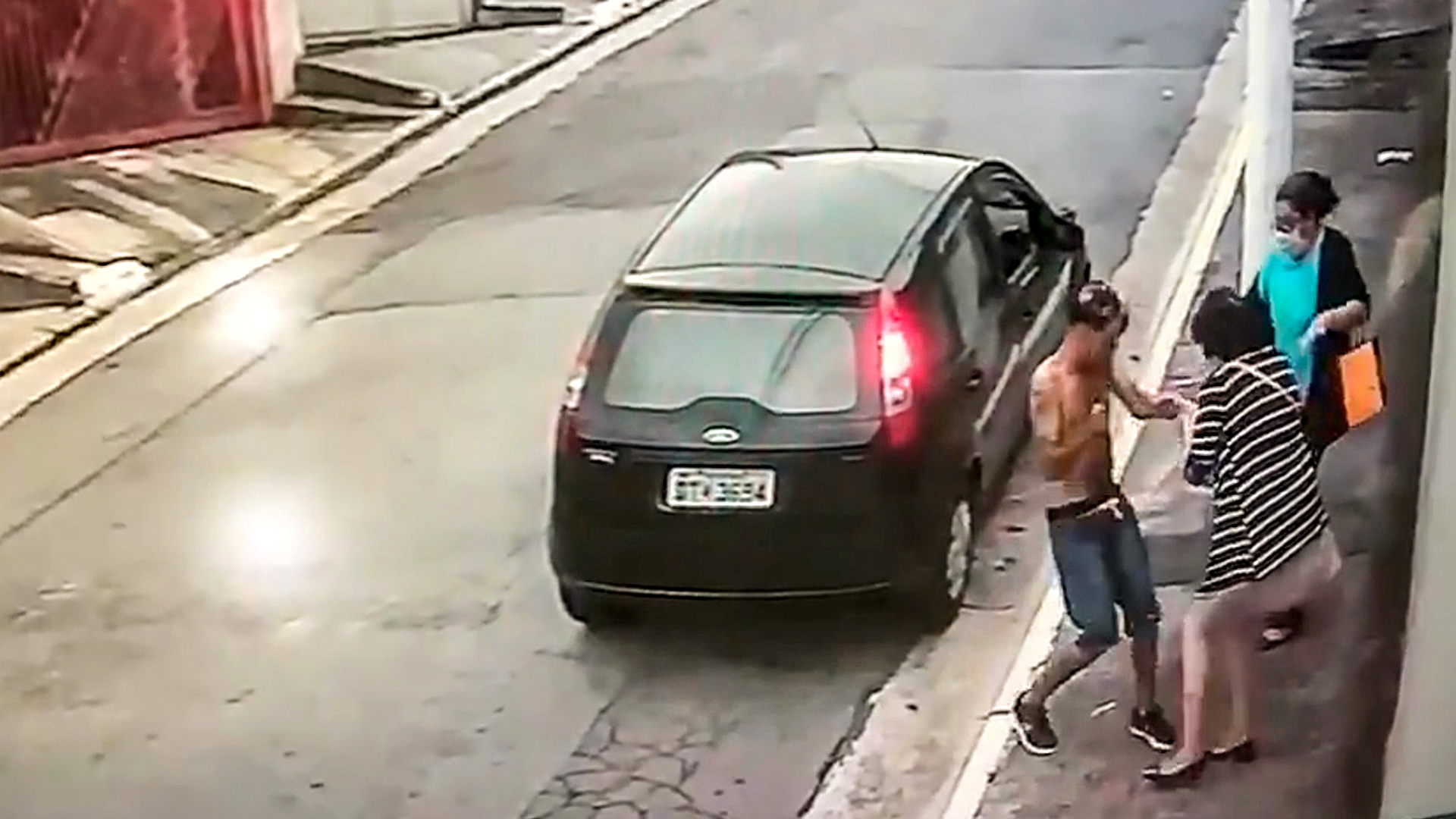 Offenders who stole a vehicle, try to steal from two ladies on the street. (@PMESP/Newsflash)

SAO PAULO — On the streets of São Paulo, Brazil, a burglar was caught on camera trying to steal from two women.

Pictures have surfaced showing a snatcher trying to attack two seemingly defenseless women who managed to fight him off and keep hold of their purses.

The incident took place on Rua Doutor Augusto do Amaral in the North Zone of the Brazilian city of Sao Paulo on 23rd January 20201.

A CCTV footage released by the São Paulo Military Police a day after the incident shows the robbers’ vehicle stopping by the pavement as one suspect jumps out of the passenger side and attacks a woman standing on the footpath.

Another woman follows quickly behind and the man attacks her too. The brave women manage to fight back and recover their stolen items as the robber’s heads back into the vehicle, ready to flee.

The images also show that the women are trying to hold onto the passenger door to prevent it from driving away along with the thief. Despite their efforts, the suspects managed to escape but were caught shortly after.

According to Overseas Security Advisory Council, there is a serious risk of crime in São Paulo. Crime continues to be a significant concern for visitors and civilians of São Paulo.

“Financially motivated crime such as armed robbery, pickpocketing, purse snatching and smash-and-grab thefts occur with the greatest frequency,” states the Overseas Security Advisory Council. “Criminals engaged in this activity are often armed and will target their victims indiscriminately, with a preference for persons projecting affluence and a lack of awareness of their surroundings. Targeted items include wallets/purses, jewelry, and electronics; cell phones are of particular interest.”

After the women called the police, members of the Military Police Tactical Force who were patrolling the area spotted the robbers’ vehicle, a Ford Fiesta, which was reportedly stolen the day before.

According to the police report, the suspects tried to flee as soon as they noticed the officers’ patrol vehicle approaching them.

The police chased them down the street, soon enough the thieves realized they were not getting away, the suspects exited the vehicle and tried to flee on foot, but were soon caught and arrested on Avenida Joao Paulo I.

A report from 2013 to 2018 shows that crimes against property such as thefts, break-in, and car robberies have been decreasing at a slow pace over the years in Brazil. In 2018, almost 514,300 such cases were reported all over Brazil, a dip from more than 578,200 episodes a year before.

The robbers were ultimately arrested by the police after being identified by the victims. The suspects are yet to appear in front of the court.

«Previous Post
The Story Of Our Lady Of The Conception»Next Post
VIDEO: First-Aid Responder Faints Getting Covid Jab