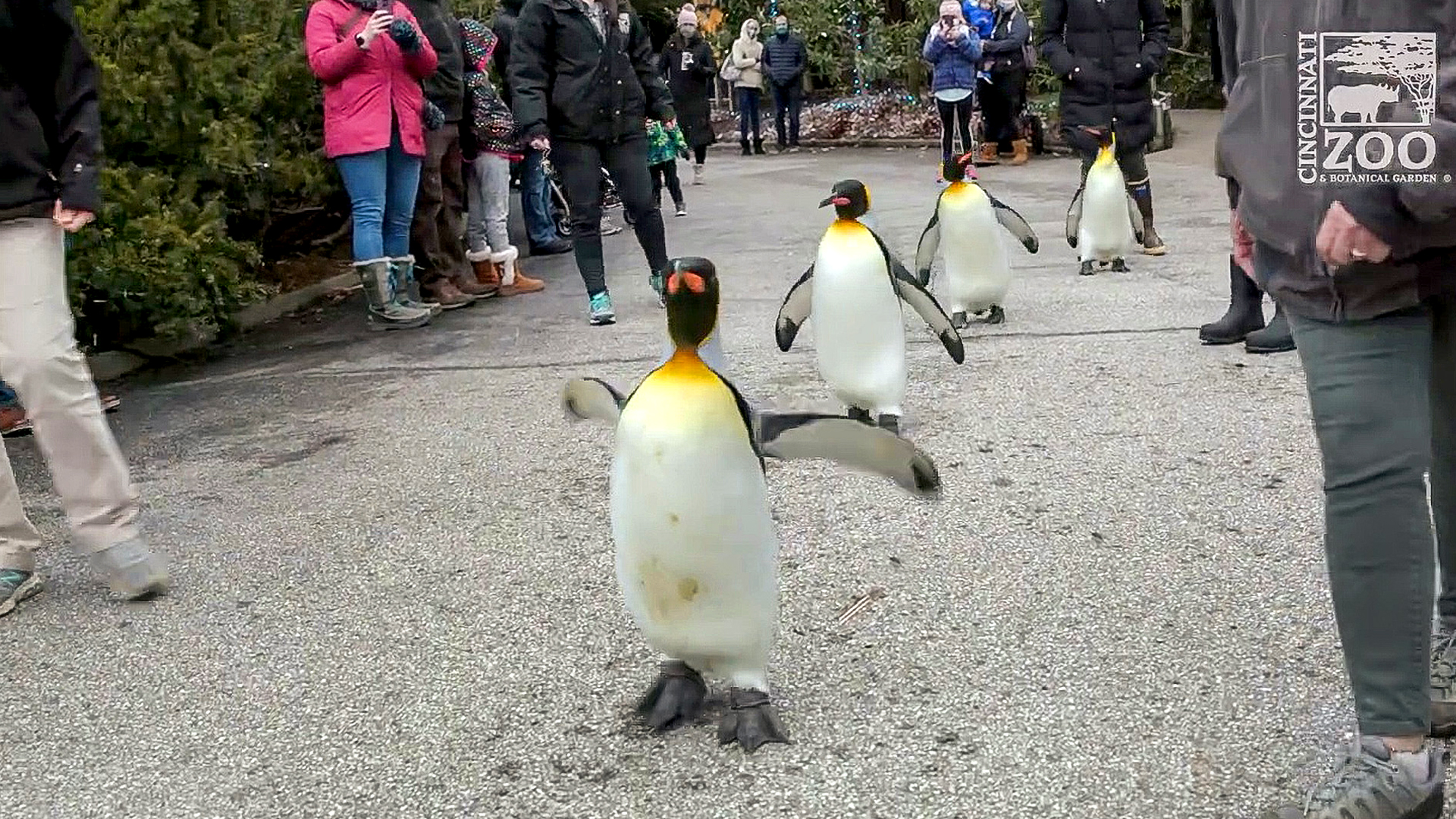 OHIO, USA — A video of the four penguins marching through a corridor of the United States zoo, as excited visitors get up close and click their pictures, has gone viral.

This was the first penguin parade of the season at Cincinnati Zoo & Botanical Garden in the neighborhood of Avondale in the US state of Ohio.

“The king penguins, appropriately including Coretta Scott and Martin Luther on MLK Day, kicked off Penguin Days today with a spectacular, slow march in front of the birdhouse,” said Cincinnati Zoo Director Thane Maynard said in a press release.

It is a regular trend at the zoo where penguins are paraded to attract the crowd. Their distinct honking can also be heard in the distance for the ones who are standing in their way. This year, the zoo has invited all animal lovers to see the royal penguin gang at 11 am on Fridays, Saturdays, and Sundays on ‘Penguin Days’.

The four penguins have all been given the names of famous people with the surname King BB, Larry, Martin Luther, and Coretta Scott.

Animal-loving spectators stood on the sides enjoying the rare view and click photos with their phones.

The Cincinnati Zoo & Botanical Garden is one of the oldest zoos in the U.S., founded in 1873. Currently, it is home to over 500 animals and 3,000 plant species.

Visitors can tour the entire zoo in two to three hours, but it is more than possible to spend the whole day there to fully take advantage of the experience.

This year the zoo has decided that parades would be different keeping the safety of guests, penguins, and the bird team in mind. Instead of joining the parade or following along, the visitors have to be at six feet distance and stay at one place and watch.

Penguins are a family of 17 to 19 species of birds that live primarily in the Southern Hemisphere. They include the tiny blue penguins of Australia and New Zealand, the majestic emperor penguins of Antarctica and king penguins found on many sub- Antarctic islands, the endangered African penguin and the Galápagos penguin—the only penguin to be found north of the equator.

“Though they are birds, penguins have flippers instead of wings. They cannot fly and on land they waddle walking upright—though when snow conditions are right they will slide on their bellies,” said World Worldlife Fund in a report.

“In the water they are expert swimmers and divers, and some species can reach speeds of up to 15 miles per hour.”

Climate change is a growing concern for penguins that live in Antarctica—the emperor penguin and the Adelie penguin. These species depend on sea ice for access to food and for places to breed. But the sea ice has been disappearing, and penguin populations along with it.

It has been observed that 50 percent of the emperor penguins and 75 percent of the Adelie penguins will likely decline or disappear if global average temperatures rise above pre-industrial levels by just 2 degrees Celcius — a scenario that could be reached in less than 40 years.