The amphibious boat takes less than a minute to enter the water while about two minutes to start running back on land.
By Joe Golder January 27, 2021
Facebook
Twitter
Linkedin
Email 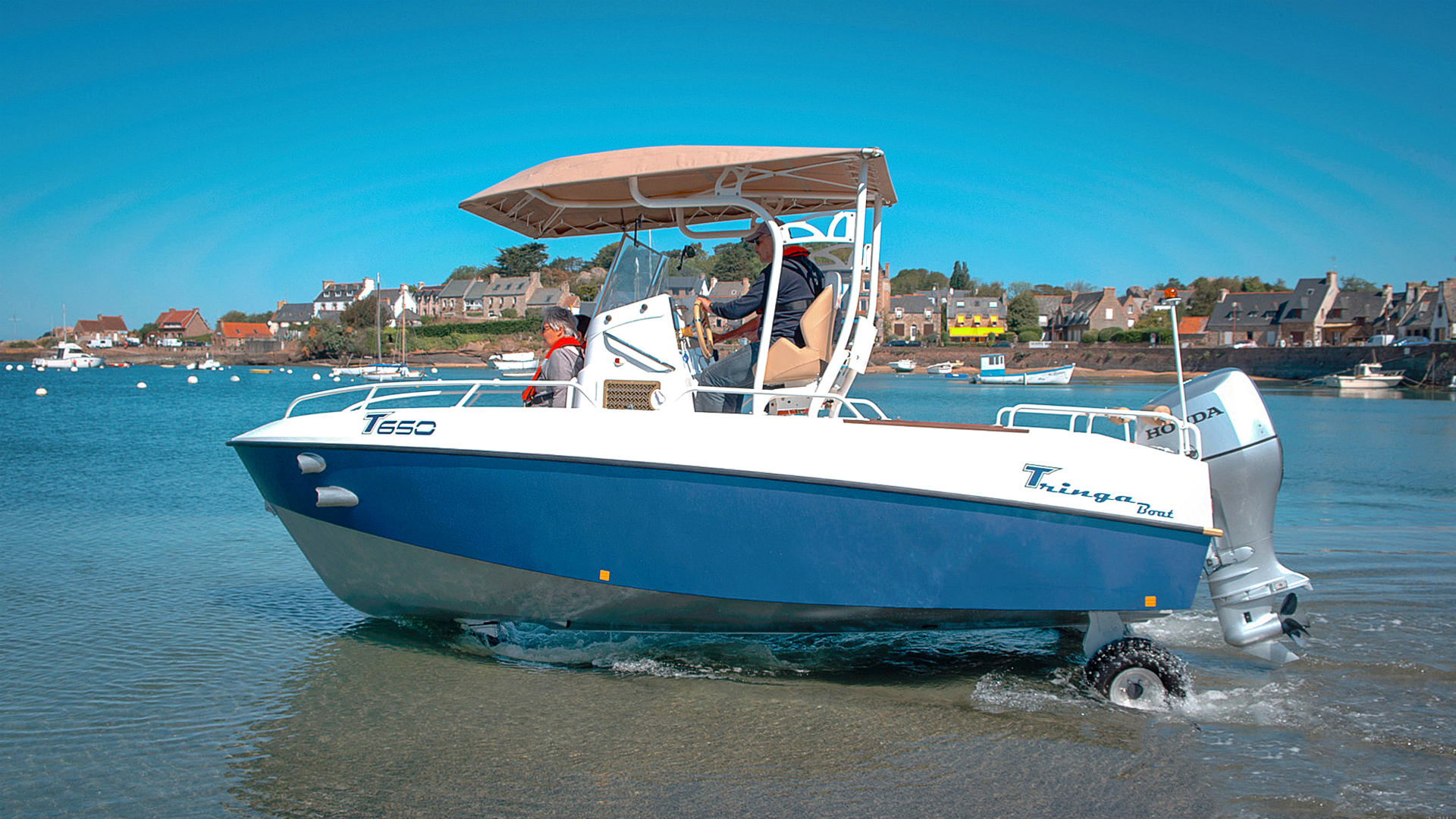 TRINGA T650 is the first boat to be approved for the roads in the world. (TRINGAboat/Real Press)

PERROS GUIREC, France — It is a big hassle for holidaymakers to carry a boat to a beach and then to push it into the water. It is a time-consuming exercise.

A French company has addressed this issue by manufacturing an amphibious boat.

“Boating enthusiasts will no longer have to spend up to two hours getting their vessel in the water. They can now simply drive their amphibious boat to a beach and start boating straightaway, said Christophe Le Bitoux, sales head, TRINGAboat, the French amphibious boat manufacturer.

The images released by the company show the first road-compliant amphibious boat that can go in and out of the sea in under a minute and it has been compared to something out of a James Bond movie.

Bitoux said the patented amphibious boat is the first in the world that can be driven on roads.

Countless people have compared the boat to something “007” would drive, said Le Bitoux, adding, “This boat would be quite at home in a James Bond film, what with it being able to go in and out of the water in no time. Parking your boat in front of a casino and going inside before coming back out and driving straight into the water – no one else can do that!”

He said that their order book is full and that the customers from all over the world have shown interest.

While the boat has passed all safety tests for it to be driven on the roads in France, it still took six years to get the authorities to sign off on it.

European Union certificates of conformity were applied for, he said, adding that Brexit would not in any way impede their ability to do business in the UK.

The invention can also be driven and used in the United States, namely in Florida for instance, where Le Bitoux said there is often a queue of boats waiting to enter the water.

In France, “the average time it takes to put a regular boat in the water ranges from one hour to one-and-a-half hours.”With its hydraulic wheel system, he said that it takes less than a minute to put the boat into the water and only about two minutes after the wheel hatches have closed to drain the water from them.

Once in the water, various models of their boat, including the TRINGA T650, can travel at speeds of over 30 knots, claimed the company manager.

The current waiting time from order to delivery is about three months, he said, because all the boats are assembled top to bottom in house and by hand, Le Bitoux said.

TRINGAboat products are equipped with indicator lights, front and rearview cameras that also have night vision, windshield wipers, and numerous other amenities one would expect to see in the latest models of modern cars, he said.

There are three models of the boat, all of which are highly customizable. They can also interact with smartphones and connect to the internet, making the invention somewhat of a ‘smartboat’.

Coming back to James Bond, the hero has used a range of vehicles to fight against his enemies. Bond’s vehicles are fitted with novel gadgets, which not only enable him to maneuver city roads but also rugged landscape, seas and skies. They are equipped with firearms and anti-pursuit systems, etc.

An example of an amphibious Bond vehicle is Lotus Esprit S1, which was used by him in ‘The Spy Who Loved Me’ (1977). Its pet name is ‘Wet Nellie’ and is loaded with arms such as cannons that spray the vehicles in hot pursuit with wet cement. It has a missile launcher too.