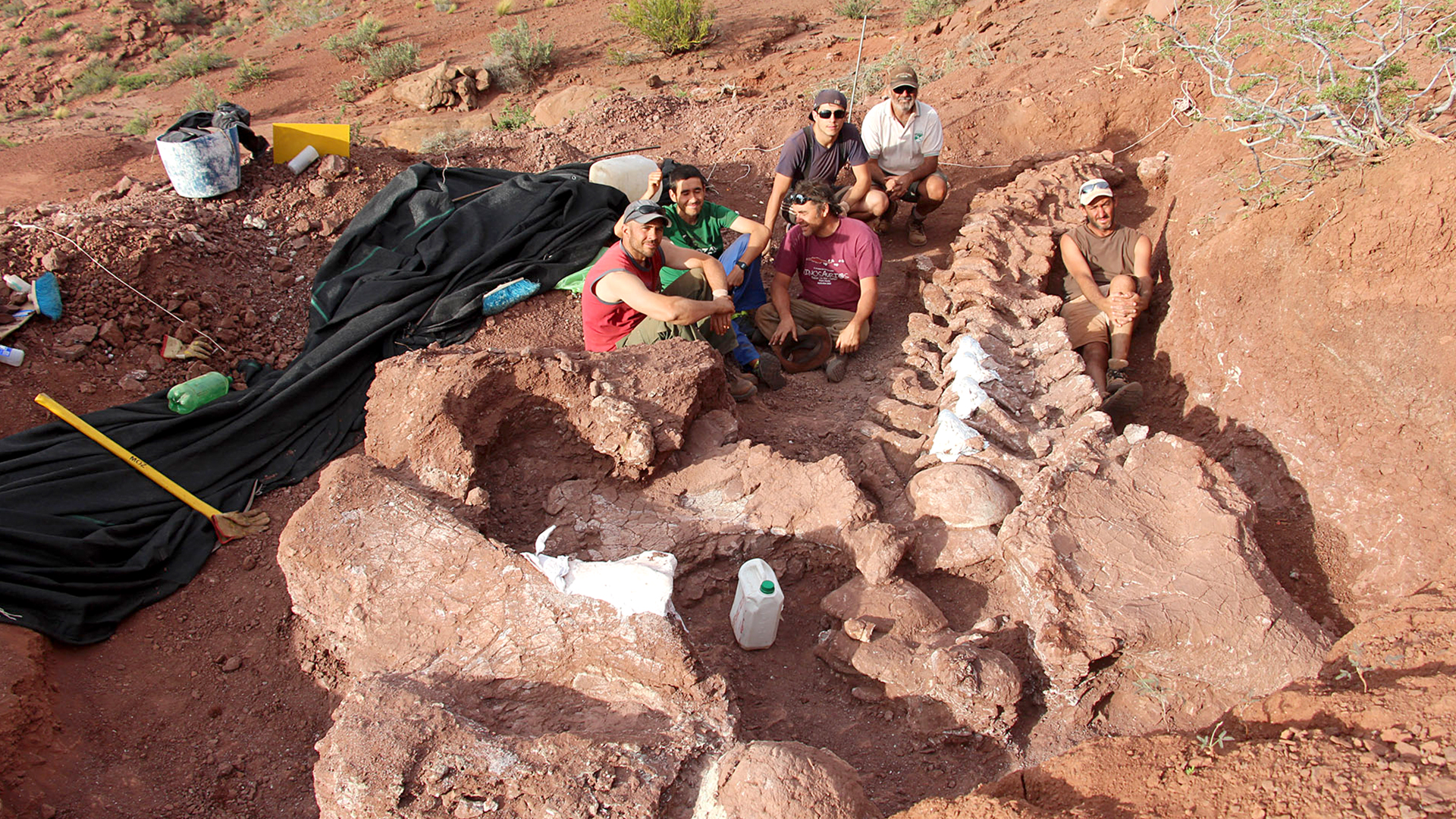 The researchers with the bones found in the site. (CTyS/Real Press)

NEUQUEN, Argentina – Paleontologists discovered the remains of a dinosaur that lived 98 million years ago in Argentina and believed it could be the biggest dinosaur ever found.

The team of paleontologists published their findings in the academic magazine. Cretaceous Research after discovering what has been identified as the remains of a Titanosaurs sauropod in 2012, 2015, and 2016.

“We were looking for remains of sauropods, and we came across this animal”, said Alejandro Otero, a researcher from Argentina’s La Plata Museum. “This discovery is important because the bones, which are well-preserved, could yield clues and further information about how these dinosaurs lived, including regarding their biology, how they fed, their circulatory system, and how they grew.”

Experts from Conicet (National Scientific and Technical Research Council) worked on the excavation that started in the Candeleros formation, a geological formation in the eastern Argentine province of Neuquen.

Titanosaur sauropods were herbivorous dinosaurs that lived in the Late Cretaceous period, around 98 million years ago.

Otero explained that till now 24 bones from tail vertebrae have been found as well as bones from the hip and scapula.

However, the size of the dinosaur is still unclear and researchers will keep on searching for more bones in the area which are fundamental to calculate the animal’s weight as the estimations of the body-mass are based on circles in the long bones.

“If the discovered fossils are compared with bones equivalent to known dinosaurs like the Patagotitan, which is another huge sauropod found in the province of Chubut, we can do an estimation of its size”, said Otero. “We can already see that the new ones are a bit bigger, around 10 or 20 percent than the Patagotitan mayorum bones”.

So far, the dinosaur found in the area has not been officially named as the anatomical information is not completed and there are still elements to be unearthed.

However, the expert explained that it could be a new species of dinosaur unknown until now, but he insisted that more research is needed to determine this with certainty.

There are a lot of rocks from the Cretaceous period in the area, but it is not common to find these kinds of big dinosaur bones in one piece and as well-preserved.

Despite the fact there is not a lot of information about the lifestyle of the sauropods, Relevant findings revel that they were herbivorous, with a large number of teeth able to cut vegetables, without canines, as all the teeth were the same size.

Regarding how they lived and in comparison with the information yielded by the Patagotitan, whose bones were found in a river area, the sauropods tended to go to the same place to drink water and feed.

The sauropods are expected to have lived like elephants, in groups that provided them with a degree of protection from predators because despite being very big, there were always vulnerable elements in the community, like the elderly or young offspring.

Neuquen, which is currently a very dry area full of rocks with very short vegetation, had a lot of rivers 100 million years ago, according to Otero.

It was therefore a good place for large animals measuring 30 meters (98 feet) long, as they would not have had a food problem.

According to Otero, the sauropods also lived with other dinosaurs and, there were carnivorous dinosaurs taking advantage of their bodies once they died. In fact, it is reported that bones and feces remains were found in the same site that could confirm that theory.

According to Natural History Museum, Argentina was home to 28 different species of dinosaurs.

“Quebrada de Santo Domingo is entirely different from the times when the gigantic titanosaurian dinosaurs roamed what is now Northwest Argentina,” said E. Martin Hechenleitner, a researcher. “This small Andean valley is the gateway to the Laguna Brava Provincial Park, a reserve for flamingos and other high altitude birds.”