The Story Of Our Lady Of The Conception 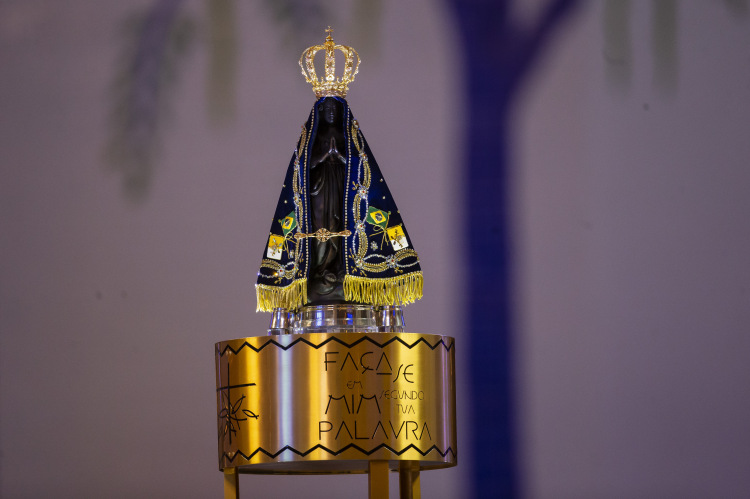 Maybe the Virgin Mary chose to appear in the Brazilian town of Aparecida because she found its name, which means “revealed,” fitting.

The devotion to “Su Señora Aparecida” or “Señora de la Concepción Aparecida,” (Our Lady of the Conception) is paramount for Brazilians. She is a Marian invocation and patron saint of Brazil. A statue of the Virgin lies in the Cathedral Basilica of the National Shrine of Our Lady Aparecida, and people nearby celebrate her every Oct. 12.

There are two stories behind the discovery of the statue, one in the Metropolitan Curia of Aparecida, and the other in the Roman Achieve of the Society of Jesus in Rome.

The history of Brazil Patroness

Brazilians say it all started in 1717, when news from the Count of Assumar, Pedro de Almeida y Portugal, reached the city of Guarantigueta. The count was the then-governor of Sao Paulo and Minas de Oro. He was planning pass close to Villa Rica, in Minas Gerais, andthe town was eager to give him the best fish they had.

Three fishermen, Domingo García, Felipe Pedroso and João Alves, cast their nets into the river Paraíba del Sur despite having a bad fishing season at the time. However, they caught something on Oct. 12: the headless statue of Our Lady of the Conception.

They searched until they found their head and later caught more fish than they expected.

One of the fishermen took the statue back home and built an altar for it. Over the years, they added an oratory so that people could make requests to Our Lady Aparecida. The inhabitants began to build a temple in 1743, which opened its doors in 1745, to venerate her.

“During Colonial Brazil, some fishermen that cast the net in the Paraiba River and, among the fish, they found half an image of the Immaculate Virgin, and they then continued fishing,” said Concepción Álvarez, a Mexican catechist. “After a while, they cast the net and, among the fish, they found the second part of the statue. When people realized it was something miraculous because the pieces’ appearance was too much of a coincidence. That is why they collected it and united both halves with great devotion.”

No one knows how this image got to the riverbed. Its creator is believed to have been a monk named Frei Agostino de Jesús, from Sao Paulo, who made it in 1650. It is dark in color, with a thick, embroiled mantle, and her hands are posed in a prayer position. José de Camargo Barros, the city’s bishop, crowned the image at the beginning of the 20th century. Furthermore, Pope Pius XI proclaimed her as the Official Patroness of Brazil in 1930.

Devotion to her grew over time. People began to gather around her to pray, believing she would grant any favor they asked of her. Thus, her miraculous powers became popular over all of Brazil.

The small temple where the image resided soon became crowned with its daily attendees, so a larger church began construction in 1846, the current Cathedral Basilica of the National Shrine of Our Lady Aparecida.

“Over time, they have analyzed the image and have realized that it is not made of stone, sand, clay or plaster, but silt, which is the sediment of the river,” said Álvarez. “It is believed that the angels themselves were the ones to shape it. It is not a sculpture or a wood carving, but one of the most miraculous invocations.”

The figurine has a height of 36 centimeters (14.1 inches). Benedictine monks at the time believed it was polychrome, but nowadays, people know that its cinnamon color is due to exposure to the smoke from the visiting devotees’ candles.

The figure suffered an attack in 1978, but the hands of the sculptor María Helena Chartuni restored it until it was as good as new. Nowadays, this figure’s fame has spread across the country, and each year, her devotees celebrate her.