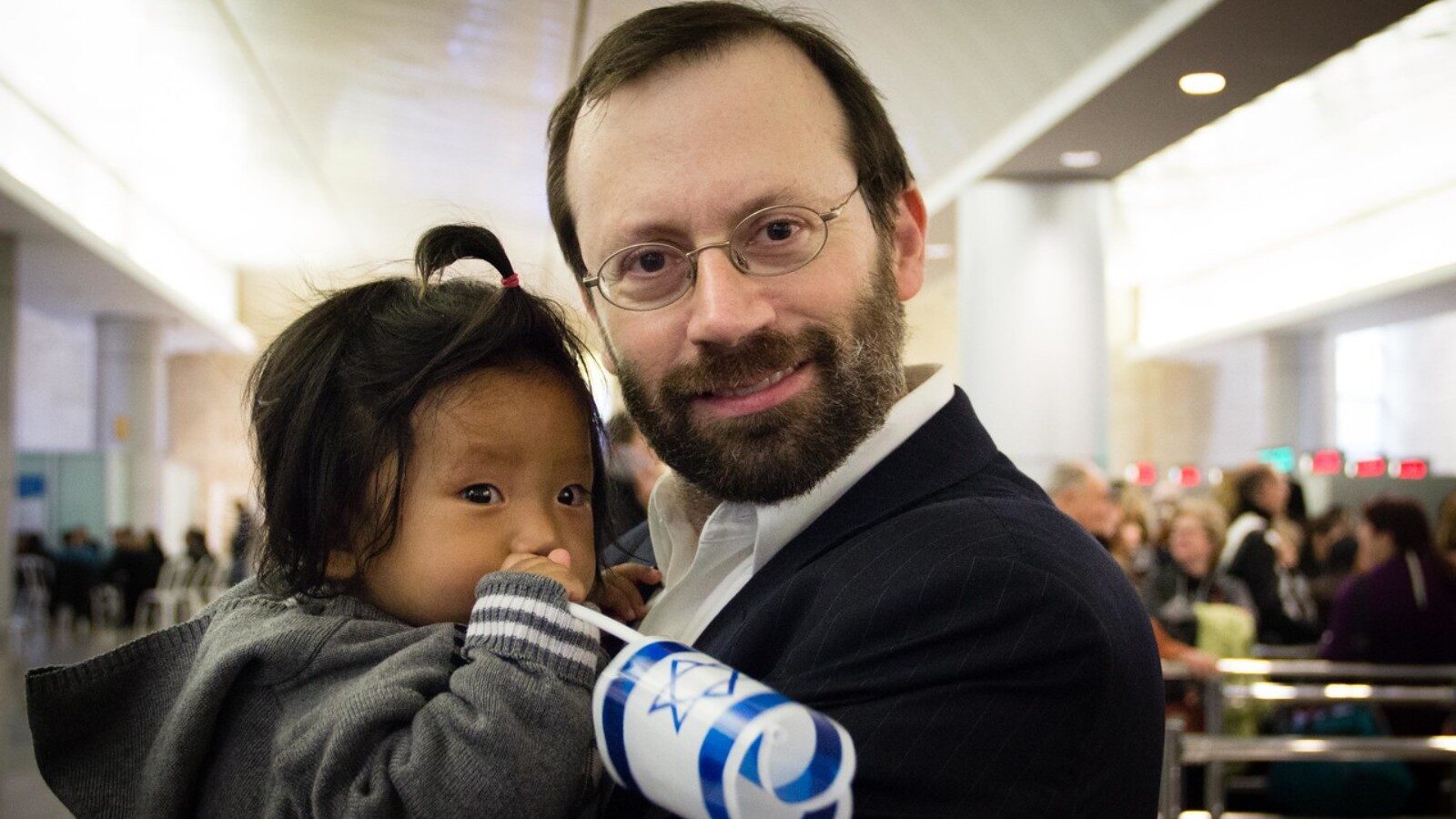 “In our eyes, we were never lost. We knew who we were and always wanted to come home and reconnect with our roots.”

On January 3, three Lhanghal sisters from northeast India — Rut, 28; Dina, 21; and Avigail, 13 — immigrated to Israel, the land their ancestors were forced to leave 27 centuries ago.

The remarkable story begins in 732 BCE, when the Assyrian Empire conquered and deported the nine tribes of the northern kingdom of Israel, which had split from the southern kingdom of Judea 200 years earlier.

Menashe (Manasseh) was the largest of these so-called Lost Tribes. They wandered through Central Asia and the Far East for centuries, eventually settling in the villages of Manipur and Mizoram, along the borders of Burma (now Myanmar) and Bangladesh.

Isolated from the world, the Bnei Menashe (children of Manasseh) continued practicing biblical Judaism in India and dreaming of their return for 2,700 years.

In the 1970s, letters began reaching Israel’s prime ministers from a group of Indians claiming Jewish heritage. The leaders were busy building and defending a nation, and the letters went unanswered.

Still, they kept arriving. And in the spring of 1997, a crumpled envelope from India landed on the desk of Michael Freund, a young New York immigrant working in Prime Minister Benjamin Netanyahu’s communications office.

Freund tells ISRAEL21c that the letter “was a very emotional appeal” from people saying they were descendants of the tribe of Menashe and they wanted to come home.

“My initial reaction was: ‘This is nuts.’ I didn’t believe there could be a lost tribe of our brethren somewhere in northeastern India. But there was something sincere and heartfelt about the letter and I chose to answer it.”

That act changed Freund’s life and the lives of thousands of Bnei Menashe in Mizoram and Manipur.

There are now nearly 4,500 Bnei Menashe in Israel, including those born here.

The Lhanghal sisters were in the latest group to arrive, shortly after another 252 community members landed in Israel in December.

The remaining 6,000+ hope to join them, with the aid of the Israeli government and Freund’s Shavei Israel nonprofit organization. Shavei means “returnees.”

In the mid-1980s, Bnei Menashe leaders connected with Israeli Rabbi Eliyahu Avichail, founder of an organization dedicated to finding descendants of the Lost Tribes.

Once he was convinced of their Jewish origins, Avichail introduced the Bnei Menashe to contemporary Orthodox Jewish practice and to holidays such as Hanukkah, which commemorates events during the Second Temple period, long after their ancestors were exiled.

Avichail and others helped a few Bnei Menashe families immigrate to Israel in the 1980s and 1990s. Then the letter arrived on Freund’s desk.

When he arrived for his first visit to a Bnei Menashe community, Freund saw people streaming to the simple bamboo synagogue in the center of the village. It was time for mincha, the afternoon prayer service.

“So I joined the community for mincha and I never forgot the power of that experience. If you closed your eyes and listened to them reciting the prayers, you could easily imagine you were standing in Jerusalem,” says Freund.

“I was very touched by their sincerity and commitment to Judaism and to the Jewish people. I saw the really wanted to live as Jews and make Israel their home.”

Freund organized the first large group immigration in 1998 and formally established Shavei Israel in 2002. The task he faced was not, and is not, simple.

“Under Israel’s the Law of Return, anyone with a Jewish grandparent has the right to immigrate to Israel and receive automatic citizenship. The Bnei Menashe do not fall under that category,” he explains.

“So Shavei Israel works with the Israeli government and the Chief Rabbinate to obtain permission to bring groups here and have them undergo a formal conversion process.” Only then do they receive citizenship and immigration benefits.

Supported by donations, Shavei Israel pays air fare and transportation costs while the government covers most other expenses for the new arrivals.

Ethiopian-born attorney and journalist Penina Tamano-Shata, the current Minister of Aliyah (Immigration) and Integration, has played a leading role in enabling more Bnei Menashe to immigrate.

“Incredibly emotional video where Meital, who has managed our Bnei Menashe operations in India for years, has finally made aliya herself! My great-grandmother told us we are going to Israel with ‘a bird made of iron.’ And here we are today making aliyah! I am not making aliyah for myself, I am making aliyah for generations and generations.”

‘We were never lost’

“Thank God, there are 4,500 Bnei Menashe in the Holy Land fulfilling the dreams of their forefathers,” says Tzvi Khaute, Shavei Israel’s community coordinator for the Bnei Menashe in Israel and India.

The former high school economics teacher from Manipur “made aliyah,” that is, immigrated to Israel, in 2000.

In India, Khaute helped set up educational centers where potential immigrants delve into Jewish texts, learn basic Hebrew and prepare for life in Israel. He works with various government ministries to meet the needs of immigrants from babies to elders.

“After 27 centuries in exile, coming home is a big challenge but everyone is happy to be living in this lucky generation that was able to make aliyah,” Khaute tells ISRAEL21c.

“My parents came, too. It was hard to leave behind their friends and their home, but they want to live here and be buried here,” says Khaute.

“In our eyes, we were never lost. We knew who we were and always wanted to come home and reconnect with our roots.”

New arrivals live temporarily in Shavei Israel’s absorption center near Netanya before moving to places such as Nof HaGalil, Maalot, Acre, Tiberias and Migdal HaEmek in the Galilee up north, and Sderot down south.

Historically, half the tribe of Menashe lived in the Galilee and the other half on the eastern side of the Jordan River in a region including the Golan Heights.

“They all have a strong sense of return, spiritually and geographically speaking,” says Freund. “Like every immigrant group, they face challenges and difficulties, and some succeed better than others. Overall it’s been a big success.”

Shavei Israel arranges language and professional training programs. “It’s very important for them to put food on the table through their own hard work,” Freund says.

Many Bnei Menashe work in high-tech factories in the North. Others have become nurses, dental hygienists, social workers and rabbis. Some in the younger generation serve in elite IDF units and others are studying in universities.

The group that came in December included Obed Hrangchal, a prize-winning MMA (mixed martial arts) fighter who hopes to join the IDF and represent Israel in international competitions.

“The Bnei Menashe have shown themselves to be committed Zionists who work hard and do their military service in the IDF. They feel a strong sense of attachment and want to contribute to Israel’s defense and prosperity,” says Freund.

“They are really a blessing for Israel. A Jew is not measured by the shape of his eyes or color of his skin, but by what’s in his heart and soul.”

The return of a Lost Tribe of Israel, 27 centuries later appeared first on ISRAEL21c.