Moving on from the NFL Network, the Hall of Famer says equitable practice and playing conditions create more paths to the pros.
By Mark Gray January 26, 2021
Facebook
Twitter
Linkedin
Email 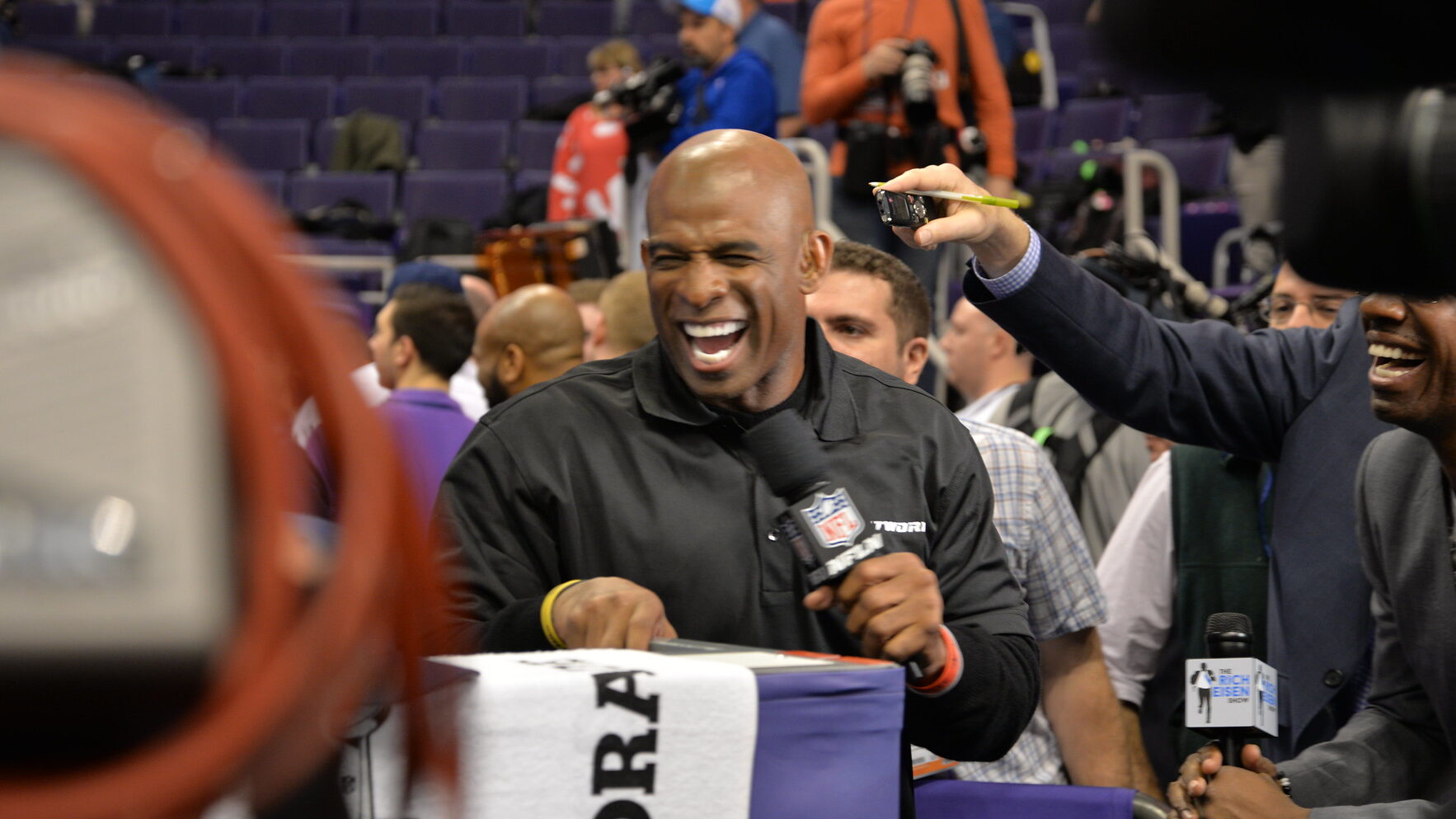 Sanders, who left a successful career as a football analyst at NFL Network, is now shaking up the HBCU football world as head coach at Jackson State University. (WEBN-TV/Flickr)

Pro Football Hall of Famer Deion “Prime Time” Sanders learned the value of movement after purchasing his first “iced out” Rolex in his rookie season with the Atlanta Falcons. His multi-diamond timepiece wasn’t working properly — or so he thought, until the jeweler told him to move his arm.

“The Rolex works off movement,” Sanders quipped during the Southwestern Athletic Conference (SWAC) Spring Football Virtual Media Days in mid-January. “I go on movement. Whenever I’m idle, I lose energy. I’m a mover and shaker who makes things happen, and that’s how my life has always been. That’s what makes me – me!”

Sanders, who left a successful career as a football analyst at NFL Network, is now shaking up the HBCU football world as head coach at Jackson State University, one of the premier programs in the SWAC and the NCAA Football Championship Subdivision (FCS).

The Jackson State program’s tradition and success position it to level the playing field in intercollegiate athletics at HBCUs. After all, Jackson State’s three Hall of Famers are more than Ole Miss and Mississippi State have combined. Sanders thinks he can change the perception that only large schools with massive resources can offer a path to the pros.

“The playing field is horrible,” Sanders said. “If these kids had the same playing field, many more would matriculate to the next level. We lit the fire that they deserve to be called on [NFL] Draft day.”

Sanders’ first order of business has been to improve the quality of his team’s campus apparel. He has already brokered deals with athletic apparel manufacturer Under Armour to outfit his team with contemporary game day gear and fashionable sweat suits that help them stand out from other students on their “yard.” He believes players’ pride in their appearance gives them a sense of hope that will carry them to success on the field and into their professional careers.

Sanders also has wielded his considerable presence and brand in the community, developing relationships with local Golden Corral franchises so his student-athletes can eat off campus. He has added a training table where players can eat in the athletic department facilities. He is working to improve the practice fields and locker rooms as well.

“It’s like back in the day when I played: If you look good, you play good,” Sanders said.

“We don’t have the best of things, but we make the best of things. We’re trying to develop, nurture and caress them in or to help them reach their goals. Either go pro [as a football player] or professional [in fields other than sports].”

Sanders already faces challenges to recruiting. Despite producing one of the top 2021 classes in America, the school self-reported a minor rules infraction. JSU lost four weeks of recruiting after being placed on probation for a tutoring infraction that happened under the previous staff.

That’s all part of a day’s work for Sanders as he strives to comply with NCAA rules that most administrators privately feel keep HBCU programs behind the eight ball. It’s one of the many institutional challenges that Sanders has discovered since taking the job.

“The new hustle is allowing kids to opt out of their scholarships but penalizing them academically,” Sanders said. “Kids are losing credits to keep them from transferring, and that’s unfortunate.”

Sanders is having a palpable impact on Jackson State, the SWAC and HBCU sports, bringing unprecedented attention to a conference that has led its division in attendance for 42 of the last 43 years. If the spring football schedule is completed, SWAC will be the only FCS conference playing and figures to be prominently featured on ESPN. Sanders and his program will be under a bright spotlight as he lives the dream of coaching both of his sons, Shilo and Shedeur.

“I feel like I have 100 sons,” Sanders said. “I sometimes have to remind myself that my kids are on this team and this will be the first time they’ve played for a school that has a band. [We] can’t wait to see the [JSU] ‘Sonic Boom of the South.’”

On Feb. 21, America will get its first chance to see Sanders’ first edition of the Jackson State Tigers when they play the Edward Waters Tigers at Mississippi Veterans Memorial Stadium in Jackson.