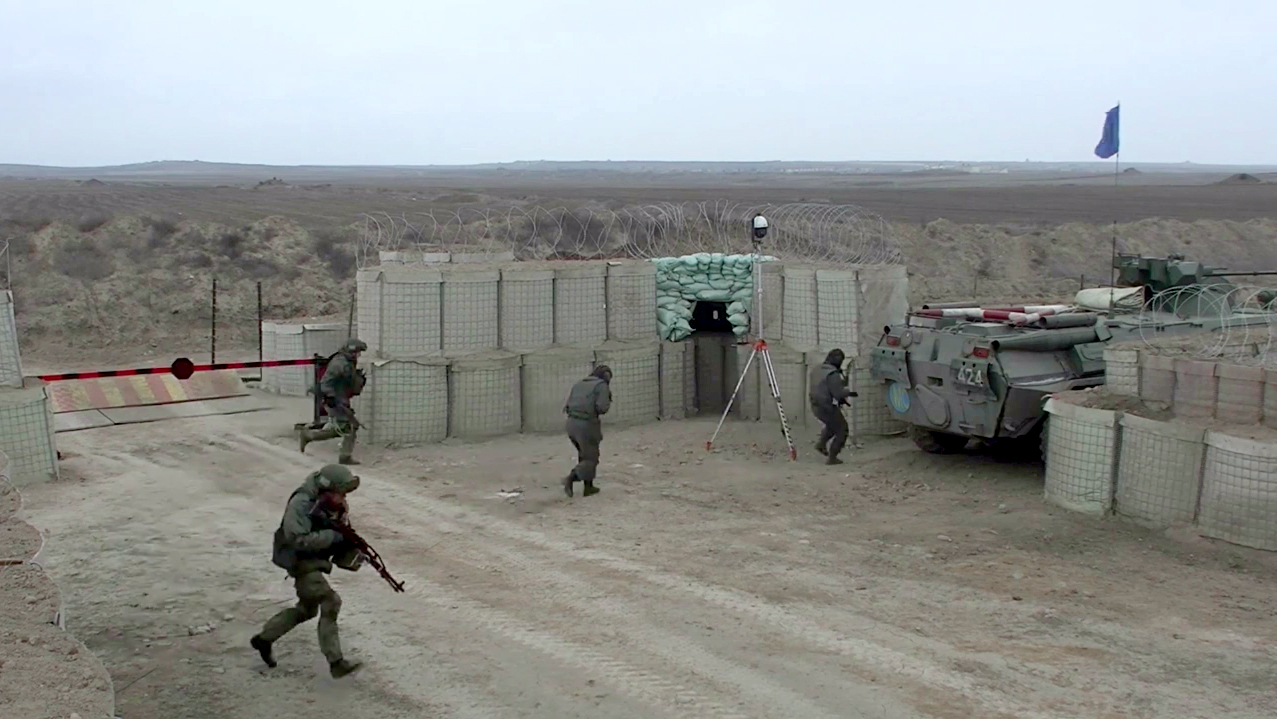 Russian peacekeepers carry out round-the-clock monitoring of the situation and control over the observance of the ceasefire regime. (Russian Defense Ministry/Clipzilla)

NAGORNO-KARABAKH, Azerbaijan — The Russian Ministry of Defense aired footage on 18th January showing a base where Russian peacekeepers are staying in Nagorno-Karabakh.

They have been carrying out the continual monitoring and observing ceasefire in the Russian province. The peacekeepers have been instructed to oversee the site and infiltrate if any enemy moment is observed.

“The posts are equipped with fortifications designed to protect servicemen from small firearms and shrapnel, and allow them to conduct continual surveillance of the area,” said the Russian defense ministry.

Earlier, the Russian peacekeepers had entered the region as part of a ceasefire brokered by Moscow, after a new round of fighting broke out last year in September.

Nagorno-Karabakh lies within Azerbaijan but was under the control of ethnic Armenian forces backed by Armenia since a separatist war there ended in 1994.

This left the region and other surrounding territories in Armenian hands. A war situation had cropped up in the region last September 27 and ended on November 10, which left killed more than 5,600 people on both sides. During the 44 days fight, the Azerbaijani army forged deep into Nagorno-Karabakh, forcing Armenia to accept last month’s peace deal.

The figure of Azerbaijani martyrs, earlier proclaimed as 2,841, was updated to 2,855 after knowing of some funerals and the identities of the dead. Over 50 soldiers were still lost; the ministry shared with the public a list of soldiers who were buried.

Russia eventually deployed nearly 2,000 peacekeepers for at least five years to monitor the agreement and facilitate the return of refugees.

Under the agreement, which leaves Karabakh’s future political status in limbo, Armenia lost control of parts of the enclave as well as the seven adjacent districts that it seized during the 1990s war.

The deal has sparked celebrations in Azerbaijan and fury in Armenia, where the country’s prime minister, Nikol Pashinian, is facing mounting criticism for agreeing to the deal.

Russian President Vladimir Putin had played a mediator role to set up a meeting with Azerbaijan President Ilham Aliyev and Prime Minister of Armenia Nikol Pashinyan on the settlement of the Caucasus.

“Developments in Nagorno-Karabakh. The President chairs a meeting before meeting with the leaders of Azerbaijan and Armenia,” read the official Twitter handle of the President of Russia.

The latest developments meant that trilateral talks are going on between the three countries. “The second issue is a very specific, international one related to facilitating the peace process in the Nagorno-Karabakh settlement and general developments in the South Caucasus,” read a statement from the Russian president’s office.