The Robert E. Lee Monument in Richmond, Va., covered in graffiti, has become a gathering place for BLM activists amid removal lawsuit. 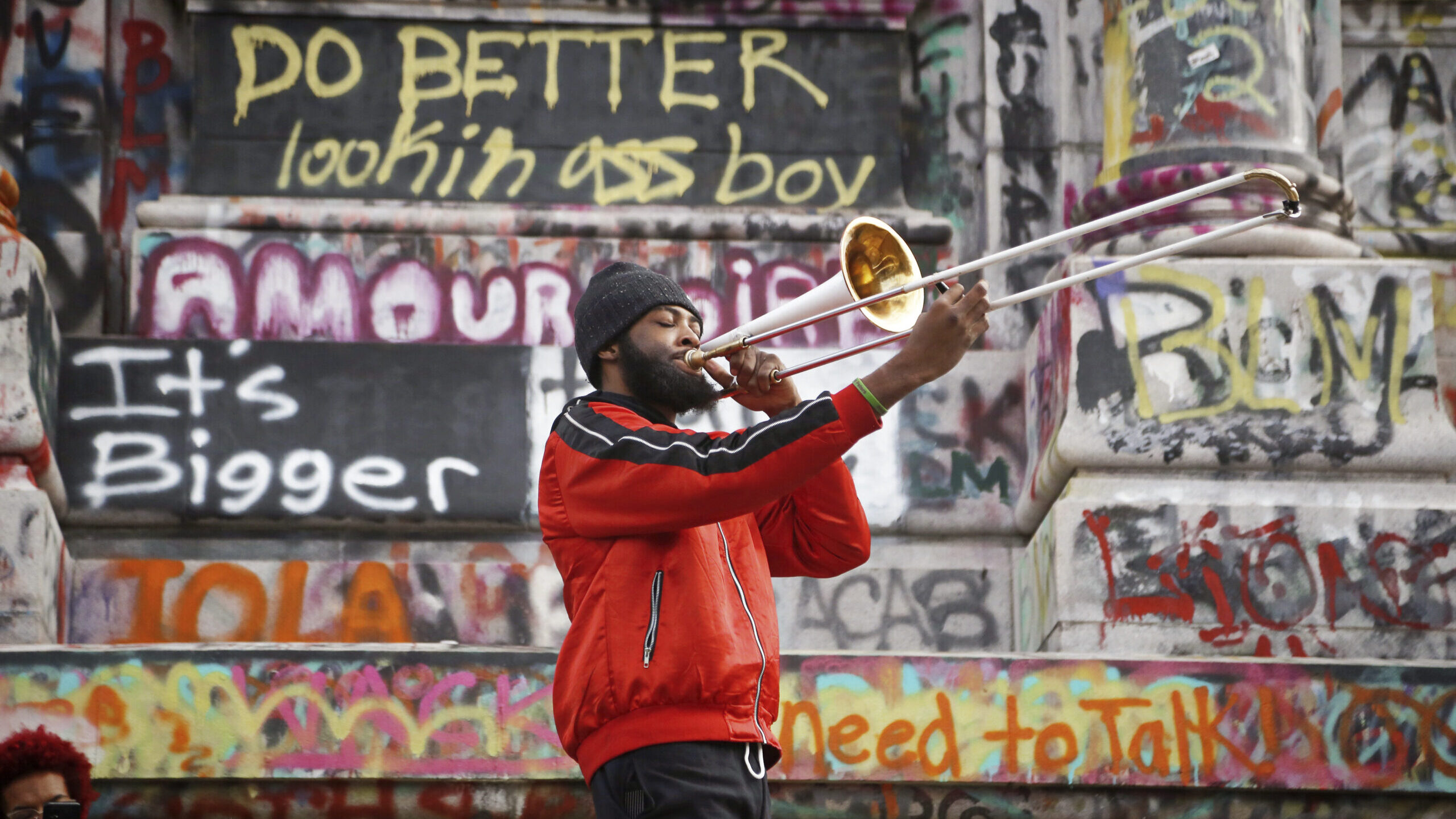 King Trombone plays a solo on the base of the Robert E. Lee Monument in Richmond, Va. (Kaitlin Newman for Zenger News)

RICHMOND, Va. — As Virginia authorities prepare to remove a 130-year-old monument to Robert E. Lee in Richmond,  a communal group have deemed this area once colored by chaos and dissent, a welcoming place of positivity for the community.

Gov. Ralph S. Northam ordered the removal of the Confederate general’s 12-ton, horseback-mounted statue in June 2020, but legal action from citizens who wanted the 60-foot-tall landmark to stay delayed the process.  A judge ruled on Oct. 27, 2020 that it’s no longer public policy in Virginia to honor the Confederacy.

“We want everyone to feel safe in this space. Even if you have some differences, we want to be able to all come together and be able to stand together and be able to enjoy each other because there’s so much hate everywhere else,” she says. “Even with the [Black lives Matter] movement, it’s not to create problems with anyone else. It’s to say equally we are here.”

“That’s why everyone is mingling, we don’t play that. We don’t ask the question ‘Who are you with?’ unless you’re being really weird,” says Richardson. “As long as you’re here in peace and don’t cause any problems with anybody we don’t care who you’re with or what group you’re technically in.”

Statues were toppled or officially removed all along Richmond’s Monument Avenue during a nationwide wave of protests in 2020. Protesters knocked and pulled down monuments to Christopher Columbus and Confederate States of America President Jefferson Davis. Later, an order from Richmond Mayor Levar M. Stoney cleared away a statue of Confederate general Stonewall Jackson.

Many Virginians don’t want to see Confederate monuments removed and see the Lee statue as a piece of their history. After Gov. Northam ordered its removal in June 2020, a group of residents filed a lawsuit arguing the removal would lower property values nearby.

Circuit Court Judge W. Reilly Marchant ruled in Oct. 2020 that Northam could remove it, but stayed his own ruling pending appeal.

Robert E. Lee was Davis’s military adviser at the start of the Civil War and took command of the Army of Northern Virginia in 1862. He successfully drove the Union army away from Richmond, the capital of the Confederacy, during the Seven Days Battles that year.

Lee’s army lost the Battle of Gettysburg during his 1863 invasion of the North. Union Gen. Ulysses S. Grant, who would later become President of the United States, took Richmond in 1865, defeating Lee’s army.

The Lee monument was next to a tobacco field when it went up in 1890, and an affluent white neighborhood sprung up around it. Today the base of the statue is surrounded by memorials for African-Americans killed by law enforcement officers on duty.

For protesters the monument, once a symbol of the Confederacy’s fight to maintain slavery as a southern institution, is a hopeful gathering place for Richmonders of all ages and ethnicities. A community garden and a basketball hoop are fixtures. Lawn chairs pepper the grass. Tents house grills for burgers, all free and funded by donations.

A man stands alone and plays a trombone, his music ringing through the air for a silent audience who cheer, laugh and mingle when the solo is over. The crowd piles onto the base of the monument, dancing and crowding around one another — some masked, some not — as a boombox plays “Juicy” by Notorious BIG.

Richardson says these joyful times used to be more frequent and blames police for clamping down on public gatherings, which Northam has limited statewide to 10 people at a time.

“This used to be way better before the police started coming and tearing everything down. We fed the community for days, for months, for free. We used to have tents, we used to have stuff out here feeding the homeless but then the police started coming down and tearing down the tents [in August]. We used to be here every single day. I think they just got tired of seeing it, they got tired of the marches even though they were peaceful, they got tired because it made them work.”

On this day, Richmond police are not interfering, but closing roads leading up to the statue and standing watch nearby, off the monument grounds.

“Down in the Capitol is a 2A [Second Amendment] rally today, I was there as well, as you can see I carry [a gun]. I went up there with my AR[-15] on my chest the same as everyone else did. I think that because a lot is going on that they [the police] aren’t really foolin’ with us,” Richardson says, referring to the festivities that continue, unlike on other days.