The Terracotta Mosques Of Bengal

These unique mosques from the pre-Mughal era tell the story of a syncretic past
By Dipanjan Sinha January 23, 2021
Facebook
Twitter
Linkedin
Email 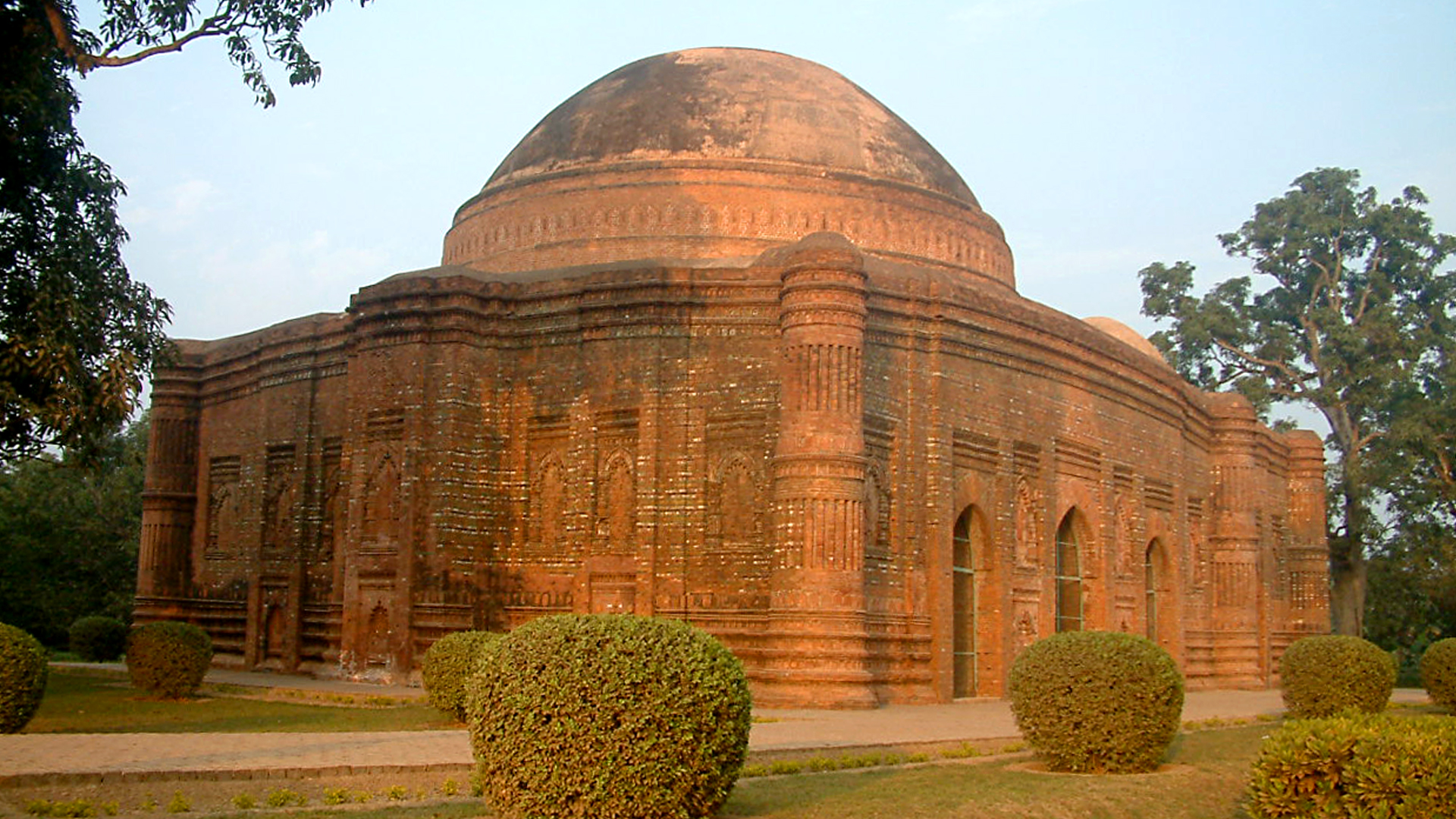 KOLKATA, India — When Sanchita Chakraborty Sinha, 34, visited the Adina mosque, around 13 miles from Malda town in West Bengal for the first time in 2004, she was surprised to see how terracotta bricks and tiles had been used to grand effect in the heritage structure. Adina is considered to be one of the largest medieval-era mosques in Bengal. It was built in 1373 AD by Sikandar Shah, the second sultan of Bengal.

Terracotta is the art of creating glazed or unglazed ceramic by baking clay and has a strong association with the architecture of the Hindu temples of Bishnupur and Bankura in West Bengal, where carved bricks and plaques with ornate designs adorn the structures.

But Chakraborty Sinha is not alone in being unaware of the significance of these terracotta mosques. Most people in other parts of the country and even locals lack knowledge about these centuries-old Islamic structures.

“Unlike other important historical sites, there is very little discussion about these mosques. After Adina, I visited the Lattan mosque and the Tantipara mosque in Malda to find out more about their architecture and history,” said Chakraborty Sinha.

In some cases, the ignorance is simply a matter of inconvenience, explains Rajarshi Chakraborty, who teaches history at University of Burdwan in West Bengal.

“Some like the Kherur mosque, built it 1494-95 AD, is one of the best examples of the terracotta style of this era, however, it is rarely visited because it is around 56 km from Murshidabad town and away from the radar of the tourist,” he said.

Chakraborty explains that, generally, historical tourism develops in an area where people find other things to do as well.

“The Adina mosque in Malda is a more visited site as it lies in the ruins of the ancient Indian city of Gaur that was founded by King Sashanka in the seventh century,” he said.

Near the ruins of this city are the terracotta mosques of the Bengal Sultanate era like the Kadam Rasul mosque (1530 AD) and the Lattan mosque (1475 AD).

Most of these unique terracotta mosques were built after the arrival of Bakhtiyar Khilji in 1204-05 AD. Khilji, who brought Islam to Bengal, patronized many of the terracotta mosques that were built in the region. Only a handful of these mosques now remain in some districts of West Bengal like Malda and Murshidabad, and in the districts of Khulna and Rajshahshi in neighboring Bangladesh.

“From the early 14th century, mosques like the Bari mosque in Hooghly Pandua were built with terracotta bricks as building blocks and domed roofs over arches,” said Indrajit Chaudhury, curator of the museum of a premier literary society, Bangiya Sahitya Parishad, and an executive ex-member of the executive council of the Centre for Archaeological Studies and Training, Eastern India.

“By 1374 the terracotta era had reached its peak with the splendid Adina mosque, which has a combination of stone and terracotta work,” said Chaudhuri.

Chakraborty points out that unlike terracotta mosques which were built till the 14th and early 15th centuries, the temples continued to be built well into the 18th century and later.

Things changed by 1573, when the Mughals entered Bengal after defeating the Afghan kings who were then ruling the region.

“This can be considered a watershed moment in the history of Bengal and its architecture because after that no major terracotta mosques were built,” said Chaudhuri.

The mosques that were built after this under Mughal patronage did not use the terracotta style. Mosque construction was now done in a pan-Indian Mughal style that was different from earlier sultanate-era architecture.

“The local craftsmen who were skilled in the use of terracotta became unemployed,
said Chaudhuri. “During this period, small Hindu zamindars and kings were getting back some of their influence by showing their allegiance with the Mughals.  And under their patronage, a new era of temple construction began. A prime example of this can be seen in the district of Bishnupur where kings like Raghunath Singha Dev (1626 to 1656 CE) built many terracotta temples.”

The terracotta style used in these temples derives from the earlier tradition that is seen in the mosques.

“Similar terracotta plaques which were earlier used for vegetal and geometric motifs (as humans figures cannot be depicted in mosques) were now used to tell stories of the Indian epics Ramayana and Mahabharata,” said Chaudhuri.

These temples, however, carry certain influences of the terracotta mosques like arches and domes. This building style could not be found in the temples of the Pala and Sena dynasties, which precede Islamic rule in Bengal.

Despite being overshadowed by the temples, interest in these mosques is growing even if slowly thanks to the internet and information sharing.

“We are definitely keen to make more people aware of these historical gems. In 2019, we have successfully restored the Badsahi (or Hussain Shai) mosque of 1510 at Nutanhat in West Bardhaman district,” said Prakash Maity, senior archaeologist, in the West Bengal state archaeology department.

There are many challenges in such restoration process. Some of the key ones being cracks that develop in the bricks with years of weathering. Another big issue is cracks caused by trees.

“In case of this mosque, a lot of trees have taken shoot in the cracks in the walls. We cannot fill these cracks, but we use chemical preservatives like polyvinyl acetate to prevent further cracking. We also uproot the trees and use organic methods to prevent any further growth of plants there,” said Maity.