Mohan Khatri, 60, a small farmer of Nathuwali village in Uttarakhand, is upset over the state government’s decision to denotify the northern Indian state’s only elephant reserve — the Shivalik Elephant Reserve —for the expansion of the Jolly Grant Airport. His village and adjoining areas witnesses frequent human-elephant conflicts. And, he fears that this conflict may get intensified if the decision is implemented.

“Elephants frequently raid our fields, destroy paddy and maize crops,” said Khatri, who heads a five-member family dependent on less than one hectare for their livelihood. His village is at the edge of the elephant corridor and around five miles away from the airport’s current location. The corridor connects two wildlife protected areas and allows for the movement of elephants from one area to the other.

“This decision only makes elephants more vulnerable and has the potential to further worsen human-elephant conflict,” said Khatri.

The state government decided to expand the Jolly Grant Airport to meet international standards and issued an order to this effect on January 8. The project entails doubling runways, parking areas, erection of new ATC towers, and other developmental works in and around the airport.

For this, 87 hectares of forest areas from the Shivalik Elephant Reserve will have to be acquired and another 18 hectares of non-forest areas. This will lead to the felling of around 10,000 trees of different species like khair (Acacia catechu), sheesham (Dalbergia sissoo), teak (Tectona grandis), kanju (Holoptelea integrifolia), jhingan (Lannea coromandelica), and gulmohar (Delonix regia).

Elephants ‘browse’ (feed on leaves, or other high-growing vegetation) on trees like teak, jhingan, khair, and sheesham. At the same time, these trees are also used by local community members for their household use like grazing of livestock, fodders, fuels, and timber 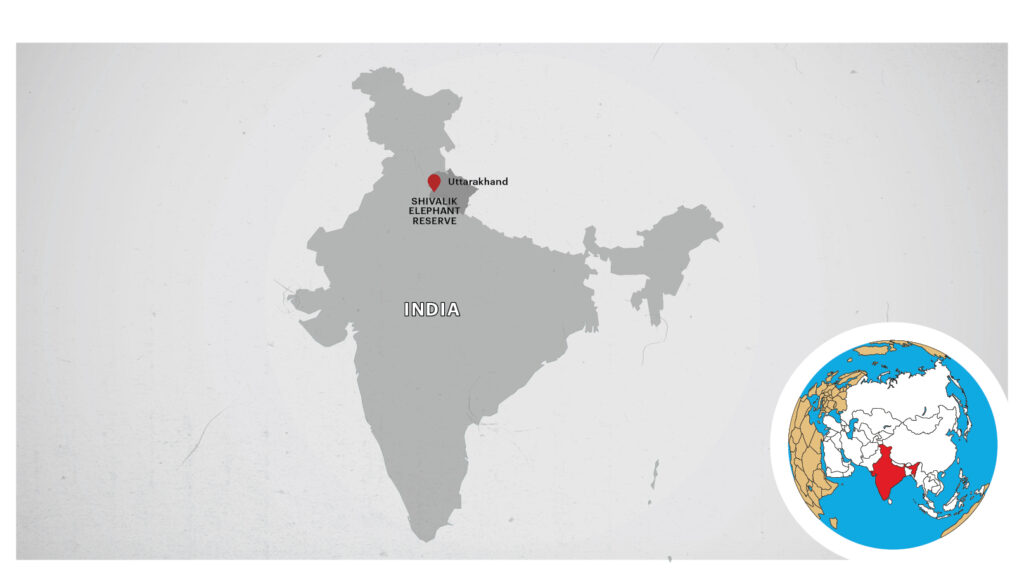 On January 11, however, a Public Interest Litigation (PIL) was filed in the Uttarakhand High Court, which put a stay order on the state’s denotification order.

The court cited that the denotification order violates Section 2 of The Forest (Conservation) Act 1980, which empowers only the central government to denotify any reserve. The court has issued notices to the state government, union government, State Wildlife Board, and State Biodiversity Board to respond in the next four weeks.

A High Conservation Value forest contains a globally and regionally significant concentration of biodiversity value, which include endemic and endangered species.

Expansion of agricultural activities and development of highways and high-voltage power lines have shrunken the corridors and led to blockage of the passages in several places.

The Wildlife Trust of India (WTI), a New Delhi-based non-profit, published a report Right to Passage in 2017 that revealed that 11 corridors of the Shivalik Elephant Reserve had shrunken, and identified a number of obstructions on the path of elephants.

“It is always painful to see an elephant stuck in traffic or get electrocuted or die in train accidents,” said Ashish Chauhan, a wildlife enthusiast and school teacher from Kotdwar village, another elephant corridor that also witnesses human-elephant conflicts. He explains that the Kotdwar-Lansdowne road overlaps with the corridors. In addition, the construction of a wall to prevent landslides also obstructs elephant movements.

In Uttarakhand, 170 elephants died in the last five years. Of these, 11 died of electrocution, 12 were run over by trains, 31 died of other accidents, and 44 deaths are due to “unknown” reasons.

Chauhan, 46, says that elephants use the corridors to find food when they are unable to forage in the forest due to natural calamities like drought.

“In 2015, in an extreme drought-like situation, a herd of elephants visited a part of rural Kotdwar where there used to be a big banana field till the early 1990s. However, when the animals found the field full of concrete houses, they broke down a few walls of houses and returned to where they came from,” said Chauhan.

The central government’s Ministry of Environment and Forests launched “Project Elephant” in 1992 to conserve the free-ranging population of wild Asian-elephants and restore their natural habitats. Under this project, the central government provides technical and financial support to the state governments for the management of the elephants in their territory. Since then, 32 elephant reserves have been notified in the country, spanning nearly 69,000 sq. km. and 101 identified corridors in northeast, central, north-west, and south India.

Some wildlife experts argue that the government’s efforts to restore natural habitats harmed the conservation of elephants. It encouraged monoculture plantations like tea and eucalyptus instead of promoting local trees. Some exotic invasive grasses like Lantana and Parthenium have outnumbered the local grasses which elephants love to eat.

These situations created a competitive environment for elephants to survive, which manifests as elephant raids into human habitation.

“About 400-450 humans lose their lives due to human elephant conflict in India annually, and around 100 elephants are killed in retaliation for the damage they cause to human life and property,” said Paul.

“The reserve in Uttrakhand has the highest density of tuskers found in India, so they need rightful corridors for their movement” said Rakesh Kumar Singh, a wildlife conservationist, who used to impart training of forest officials of Shivalik Elephant Reserve.