The farmers, who have been protesting for months, are planning a big rally in the capital on Republic Day, Jan. 26. 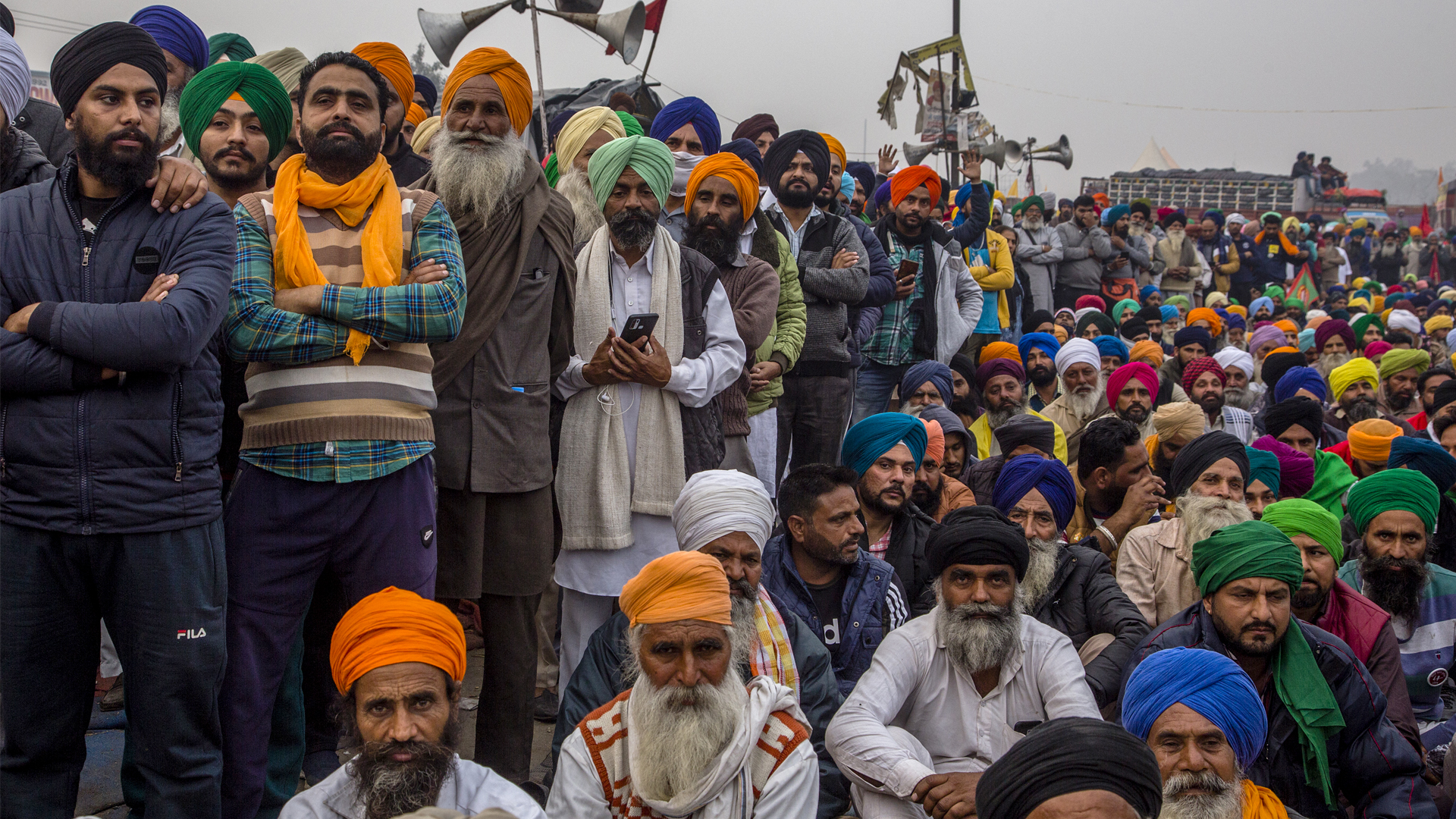 Indian farmers listen to a speaker as they sit in a protest against the new farm laws at the Delhi-Haryana state border, India. (Yawar Nazir/Getty Images)

NEW DELHI— Angry Indian farmers, who have been protesting three new farm laws for months, have rejected a government proposal to put the laws on hold for 18 months.

Farmers who have been protesting at the borders of the national capital for more than a month despite cold and rainy weather, are sticking to their demand for repeal of the laws.

Meanwhile, they are organizing a large rally, anticipating representation from 20 states, with plans to encircle the capital during the annual army parade on Republic Day, Jan. 26.

“We will carry tableaus of farm laws and agriculture, highlighting how these laws will kill farmers, and display the national flag along with our organization’s flag,” said Rakesh Tikait, spokesperson for the Bhartiya Kisan Union.

“We intend to show our determination against the three laws, as we are completing two months of our protest [in the capital] on Jan. 26.” 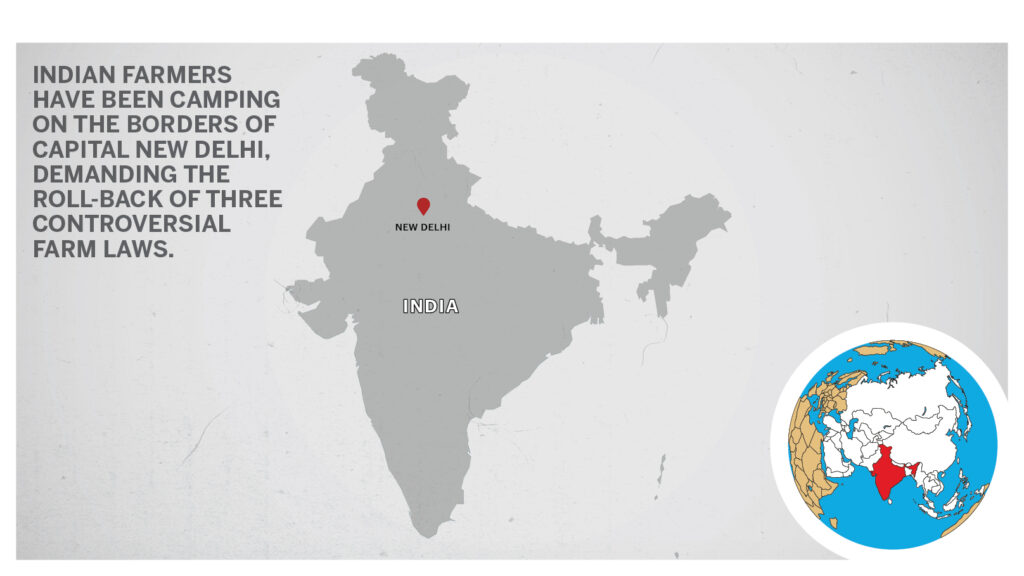 The government’s proposal was rejected on Jan 21 during a general meeting of the Samyukt Kisan Morcha [Joint Farmers Front] union. After nine rounds of talks, the government had proposed on Jan. 20 to put on hold the three contentious laws.

Union Agriculture and Farmers’ Welfare Minister Narendra Singh Tomar, who spearheaded the government’s discussion in the 10th round, proposed to put the new laws on hold for 18 months.

After the government asked the Supreme Court to intervene in the protests, the court said, “The question of entering Delhi is a law and order matter and will be determined by the police,” noting that the court is not the “first authority.”

The Supreme Court on Jan. 12 put a temporary stay on the three laws in an attempt to end the protests and ordered the formation of a four-member mediation committee to look into the concerns of farmers, government and other stakeholders.

Farmers called the temporary stay a “symbolic win” but rejected the order for the four-member committee since they were not consulted about the panel. They also said the committee members had “openly supported the laws in the past.”

“Our lawyers and other party lawyers repeatedly requested the Supreme Court to consult protesting farmers organizations before constituting the committee,” said Darshan Pal Singh of Samyukta Kisan Morcha, a collective whose members are protesting.

“While all organizations welcome the suggestions of the Supreme Court to stay the implementation of the farm laws, we are collectively and individually not willing to participate in any proceedings before a committee appointed by the court,” said Singh.

Mann, president of a faction of Bhartiya Kisan Union, supported the three laws and congratulated the government for bringing the reforms. But he recused himself from the committee after strong reaction from farmers.

Gulati, an agriculture economist and former chairman of the Commission for Agricultural Costs and Prices, is the chair professor for agriculture at the Indian Council for Research on International Economic Relations. He is also head of an agriculture task force formed by the prime minister. He openly supported all three laws and advocated for pro-market agriculture reforms.

Joshi was director for South Asia at the International Food Policy Research Institute in New Delhi and led many agriculture research institutions. He also supported the three laws and advocated for pro-market agriculture reforms.

Ghanwat, president of Maharashtra-based farmers organization, Shetkari Sanghatana, has long favored market-led reforms in the agriculture sector. His organization showed full support for the minister for bringing reforms in agriculture.

Social media platforms have been flooded with memes against the four-member panel.

“The honorable court has asked the fox to guard hen,” wrote one activist, Ramandeep Singh Mann.

A few opposition parties, including the Indian National Congress and Shiromani Akali Dal, also raised concerns about the new laws.

Bhartiya Kisan Union Lokshakti, another farmers organization, filed a plea for reconstitution of the committee.

“The plea was filed because all the present committee members have expressed their support for farm acts through their columns in different newspapers since the ordinance came into force,” said A.P. Singh, the lawyer who filed the plea on behalf of the farmers organization.

Chief Justice S.A. Babode issued a clarification, stating, “Just because a person has expressed a view on the matter, that is not a disqualification to be a member of committee.”

The court asked the government to respond to the petition asking for reconstitution of the panel.

The now-three-member committee met for the first time on Jan. 19 in New Delhi to prepare recommendations after discussion with farmers, farmers unions and other stakeholders.

Southern Soul Legend Enjoying The Fruits Of His Labor

VIDEO: Leader Of The Pack: Amazing Wildlife Worker Who Raises A Whole Family Of Cheetahs

Mutual Trust Is The Motor Running This Arab-Jewish Startup

Popcorn With Zenger: New ‘Fast & Furious’ Is Out Of This World — But Not In A Good Way