It is the best country to see the 26 colorful species flutter their wings.
By Vanessa Sam and Christian Valera Rebolledo January 22, 2021
Facebook
Twitter
Linkedin
Email 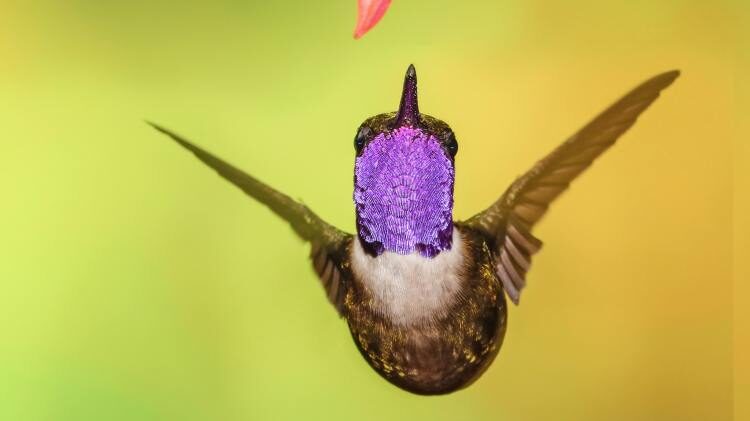 The description is easy: a bird that fits in the palm of one’s hand. Yet, such a definition does not do justice to these extraordinary creatures.

The only thing that matches the variety in these small birds is their beauty.

Hummingbirds seem like magical animals out of a fantasy book — full of joy and color. Its English name comes from the buzz generated when they flap their wings, but the word may also have a Caribbean origin in other languages.

Costa Rican hummingbirds are fast and beautiful, similar to those seen in other regions of the Americas. The country encompasses more hummingbirds than America and Canada put together, with up to 26 species in an area called La Paz Waterfall Gardens.

Hummingbirds are commonplace in any Costa Rican city, whatever the season. Although tourists may find them most commonly in mountainous and rocky areas, they can also appear on beaches, mangroves and spas.

The bird, one of the smallest in the world, is native to the Americas. It depends on a flower-based diet, rapid flight and constant wing flutter to remain alive.

Hummingbird chicks reach maturity in just a few months and breed during the sunny season — November to March.

Their nests are small and well-hidden. Bird watchers can easily find them walking through the country’s trails, although people can also discover their nests under bridges, large leaves, or behind flowers.

“The Monteverde biological reserve is one place where people can admire these birds,” said Enrique Alejandro, a tourist who came to the area to witness the bird in its natural habitat. “Besides, in the reserve, there are about 100 mammal species, 400 birds, 120 amphibians and reptiles, and that is without counting the tens of thousands of insects inhabiting there! It is the ideal place to see a hummingbird with your eyes.”

In which part of Costa Rica can one find these majestic birds?

They live in diverse environments, from high and cold lands to humid or dry tropical forests. They feed on vines and heliconia. Literally, all parts of Costa Rica are humming with hummingbirds! From large cities, full of people and buildings, to open natural spaces, such as fields, beaches or forests, one can find these magnificent birds.

The best place to see them is the Central Volcanic Mountain Range. Another great site is the Talamanca Range, in San Gerardo de Dota, which houses 15 species.

In the South Pacific Region, in Golfo Dulce, they have several types of plants, such as heliconia, one of the bird’s preferred foods, and an ideal viewing spot.

In Turrialba, they have only 15 species. However, it contains some of the rarest and precious species, such as the Violet-crown Woodnymph, Bronze Tail, Green Hawthorn Tail, Violet Sabrewing, Brown Violet Ear, Green Hermit and the Green Crown Brilliant.

“One must have an eye like a hawk’s to be able to catch hummingbirds. They move so fast that sometimes it is impossible to photograph or record them,” said Alejandro. “The truth is they are beautiful, elegant animals. When they pass in front of your eyes, it is a spectacle without equal.”