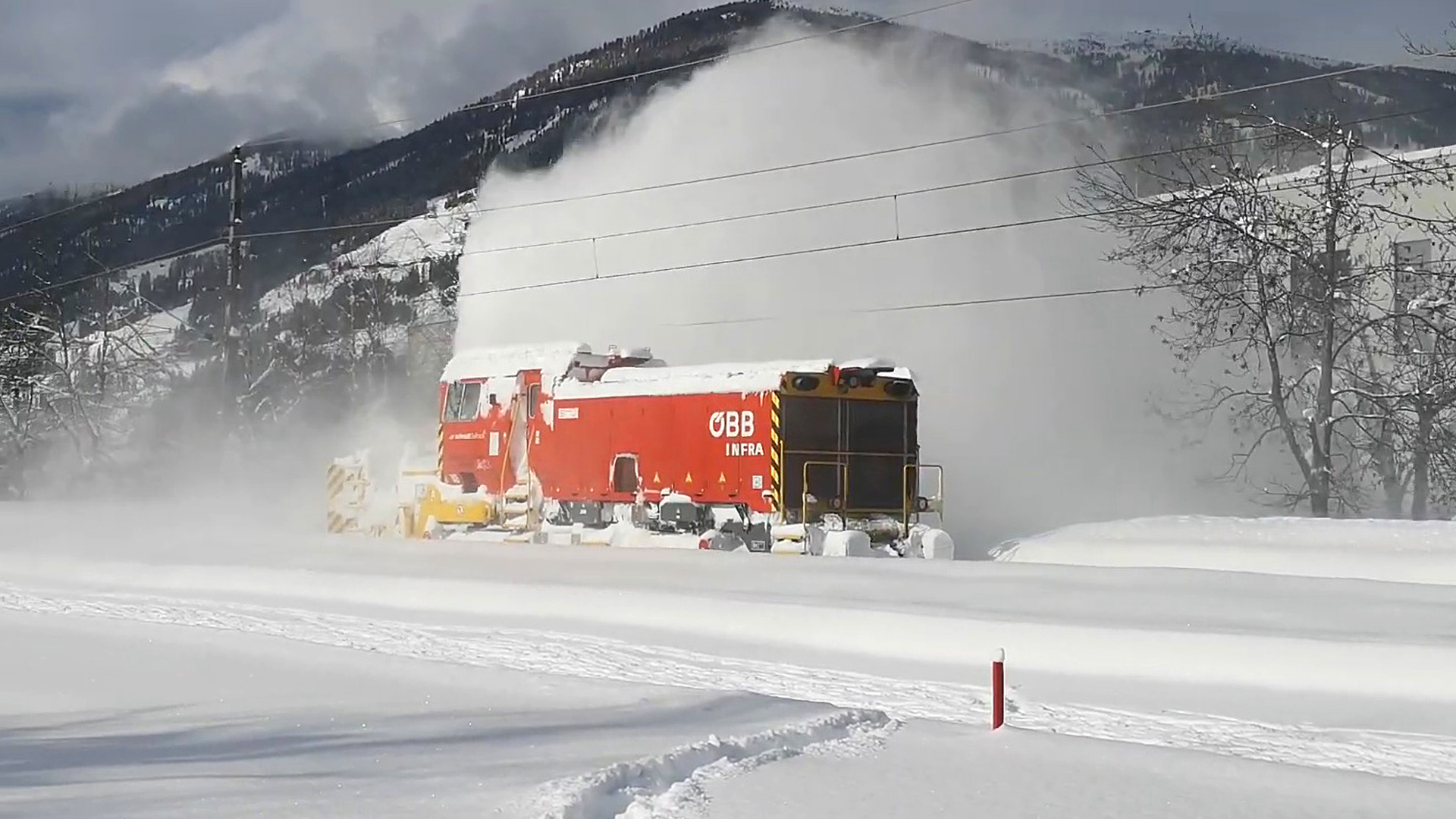 The Beilhack X491.003 snowblower clearing snow off the tracks in Austria.(bahnbilder.warumdenn.net/Newsflash)

Tyrol, Austria – A new innovative snow blower is easing the winter woes of the Austrian authorities and commuters.

It is not only clearing piles of snow on an Alpine railway but also making it much the process of clearing snow quicker.

The Austrian Federal Railways‘ new high-tech snowblower has been roaming around the rails of the Alps in the Austrian state of Tyrol over the past few days.

Reports said the Beilhack X491.003, which has also been given the nickname ‘Snow Queen’, holds an engine power capacity of 2,000 Horsepower.

The Snow Queen recently powered through 1.5 meters of fresh snow from the town of Lienz to the town of Sillian.

Local media said it has the ability to clear up to 15,000 tons of snow in one hour.

This high-performance snowblower is being used on the Arlberg route and is clearly accomplishing good results, as seen in the videos by Gerfried Moll, the railway friends association in the town of Lienz.

Regardless of its 77-ton weight, the snowblower can reach a speed of 25 kph compared with its predecessors which could reach only 5 kph.

A video shows the brown snowblower of the size of a locomotive moving rapidly ahead throwing jets of snow on the right side in the backdrop of the snow-covered area and cloudy sky and mountains. The jets of snow rise as high as the trees on the side, tentatively 30-40 feet tall.

Austrian Federal Railways’ employees said they would be happy to work with the Snow Queen not only in Tyrol but surrounding areas as well.

It could potentially be of great use to the railway services in western Austria, a region covered by over 1,000 kilometers of tracks with frequent winter snowfalls, as winter tourists are keen to get to the resorts on time in the Alps.

Tourism is the leading industry in the Alps. It has also been boosting urbanization in the region. Cropping up of tourist resorts has been rapidly consuming land, much faster than the non-tourist occupations. Moreover, commuting has increased traffic in the area. This puts the sensitive environment of the Alps in danger.

Moreover, motor-based leisure activities and adventure sports such as mountain biking, paragliding and canyoning are also increasing in the area. This is not only disturbing wildlife but is also threatening the biodiversity in the Alps.

Winter skiing is one of the devastating leisure activities ecologically in the Alps. At present, 10,000 transport facilities serve about 300 ski areas spread over 3,400 square kilometers in the region. Building ski runs has been damaging the Alpine landscape irreparably. Snow canons add to these problems by using water, and chemical, energy and biological additives.

Sustainable tourism will help protect nature in the Alps.

Winter tourism is the most vital revenue source. However, snow is a key element to sustain tourism in the Alps. The absence of snow in the late 1980s had adversely affected tourism in the region. Climate change is threatening to deplete snow cover in the Alps, which will likely hit the tourism industry.

«Previous Post
VIDEO: Fearless Snowboarder Takes on a Ridge Too Far»Next Post
The Ecological Reserve of Nanciyaga in Veracruz: An Ideal Place for Ecotourism