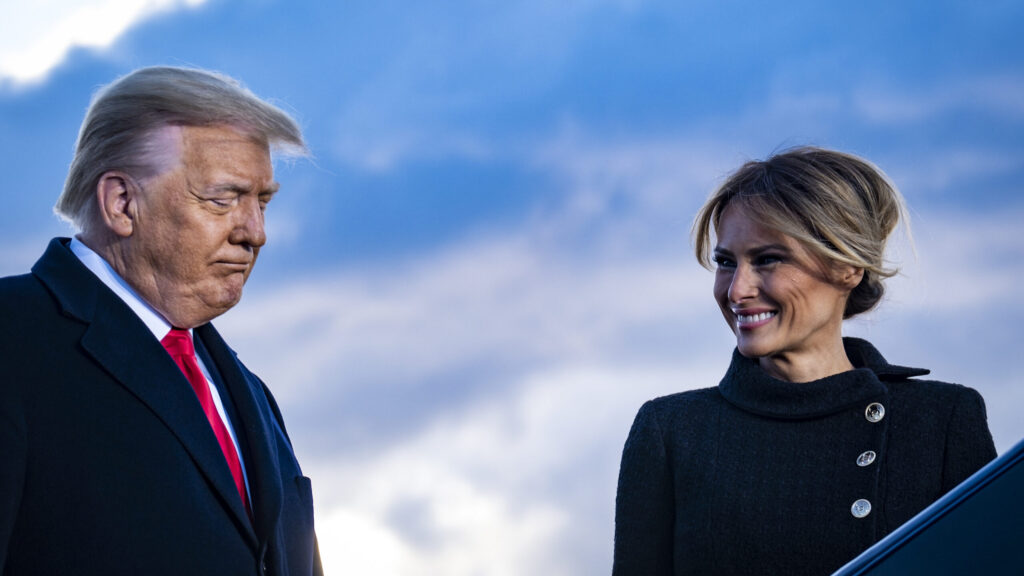 Donald and Melania Trump prepare to board Air Force One one final time with Trump as president at Joint Base Andrews, Maryland, on January 20. (Pete Marovich - Pool/Getty Images)

With his legal immunities expired, former President Donald J. Trump faces several pending and active lawsuits that could upend any hope of extending his political career, including a trail of civil lawsuits and another looming Senate impeachment trial.

Nearly 140 lawsuits have been filed against him over the last four years, including two defamation suits by women accusing him of sexual assault. The Trump Organization is under investigation by New York Attorney General Letitia A. James for real estate fraud, and Mayor Bill de Blasio announced last week that New York City will be cutting all business ties with Trump’s company following the U.S. Capitol riot on Jan. 6.

One lawsuit comes from within his family. Mary L. Trump, the former president’s niece, filed a suit in September accusing him and two of his siblings of scheming to cheat her out of her inheritance. She is seeking $500,000 in damages.

Then there are his income tax returns. After Trump sidestepped for years the recent custom of presidents and major party nominees publicly releasing their tax returns, The New York Times published a story indicating that he paid a total of $750 in federal taxes in 2016. Manhattan District Attorney Cyrus R. Vance Jr., who has been leading an investigation into the Trump Organization since 2018, has tried to subpoena his financial records. Trump will likely appeal the subpoena, and the matter may go as far as the U.S. Supreme Court.

In the dying days of his presidency, Trump became the first U.S. president to be impeached twice. The House of Representatives on Jan. 13 passed a single article of impeachment for “incitement of insurrection” after his supporters stormed the Capitol.

Senate Minority Leader Mitch McConnell, in a turn on the then-president, said on the Senate floor that the mob had been “provoked by the president and other very powerful people.” It was his first direct condemnation of Trump during an otherwise long-term alliance.

“This impeachment is quite different in the sense that the last time around, Mitch McConnell was completely opposed to it from the beginning,” Chris Haynes, associate professor of political science at University of New Haven, told Zenger News. “He whipped his votes, and the Republican response was pretty unanimous. His current attitude is very different from what happened last time, and one of the reasons is because McConnell was actually involved and impacted by this.”

“The vice president, speaker of the House and many senators were in the building while the insurrection took place. They were completely shocked by this experience, and it happened to them personally. When people have things happen to them, they care a lot more,” Haynes said.

In the end, the implications of the riot may go even further than Trump’s role in the insurrection, as some prominent Democrats have suggested other Republicans may have helped the rioters.

“If in fact it is found that members of Congress were accomplices to this insurrection, then there will have to be actions taken beyond the Congress in terms of prosecution,” said House Speaker Nancy Pelosi in a recent press conference.

Over 100 rioters have been charged by the Justice Department, but no government officials have been named in connection to the demonstrations. The FBI said it had received over 100,000 tips relating to the investigation, many of them in the form of pictures and videos.

Trump’s impeachment trial will also be the first to be carried out after the president is no longer in office, meaning there is little precedent about his post-presidential rights.

One significant legal factor is the 14th Amendment to the U.S. Constitution, which states that any person who has sworn an oath to protect the Constitution cannot hold federal public office again if they participate in an insurrection against the government.

“If the Senate finds him guilty, they can’t remove him from office because he’s already gone. But they will then have a second question about whether to deprive him of his ability to ever hold office again, or beyond that, potentially, some of the other benefits that former presidents get, like Secret Service protection, an annual stipend and pension,” University of New Haven associate professor of criminal justice Michael Lawlor, told Zenger.

Two-thirds of the Senate must vote that Trump encouraged the riot at the Capitol for him to be considered guilty of “incitement of insurrection.” Although Republicans seem less united on this impeachment trial than Trump’s first, which took place in December 2019, exactly how many Republicans would be willing to vote to convict him remains unclear.

“Trump is covered by the First Amendment, unless it is proven that there was an actual incitement to imminent lawless action. Trump’s language is a little more ambiguous in this case,” said John Vile, professor of political science and Dean of the Honors College at Middle Tennessee State University. “Although his speech seems to be a catalyst for what followed, that doesn’t necessarily mean that he intended it.”

The Senate is expected to vote on Trump’s second impeachment during President Joseph R. Biden Jr.’s first weeks in office.