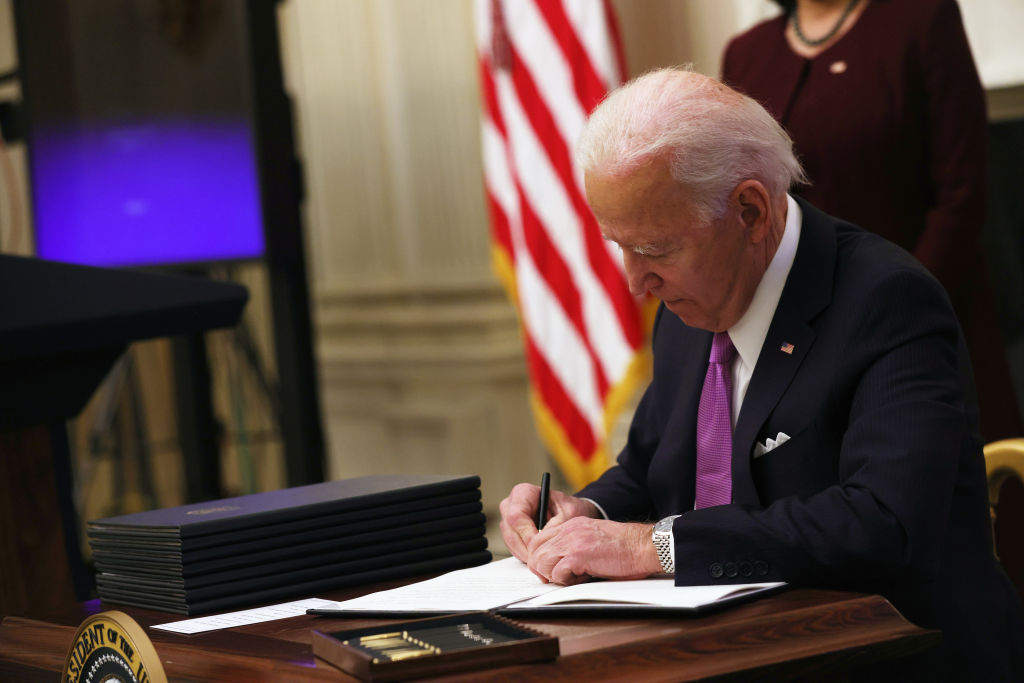 U.S. President Joe Biden signs an executive order during an event in the State Dining Room of the White House. President Biden delivered remarks on his administration’s COVID-19 response, and signed executive orders and other presidential actions. (Alex Wong/Getty Images)

President Joseph R. Biden Jr. signed 17 executive orders, proclamations, and reviews just hours after his inauguration, signaling an abrupt change of course for the new administration, including rejoining the World Health Organization and Paris Climate Accord.

Despite his calls for unity and bipartisanship, Biden immediately reversed some of Trump’s most controversial executive orders — in particular, those aimed at immigration, including building the southern border wall and bans on entry for Muslims from several countries. He also swiftly addressed pandemic response, infrastructure, and climate issues.

Among the most notable of Biden’s orders was the move to halt building of the border wall between Mexico and the U.S., and to immediately halt the national emergency declaration Trump used to redirect billions of dollars to the wall. The legality of Trump’s actions will now also be reviewed.

Biden also sought to bolster the Deferred Action for Childhood Arrivals program, which is most commonly referred to as “DACA” and limits the deportation of immigrants brought to the U.S. as children, often called “Dreamers.” Biden encouraged legislation allowing for permanent status and providing a path to citizenship. The Trump administration tried to end it in 2017 and it was suspended in July 2020. (The program was reinstituted on December 4, 2020, under a federal judge’s order, and the Department of Homeland Security was ordered to quickly begin accepting applications.)

Biden also ended what was termed the “Muslim-country travel ban”, the previous administration’s orders preventing certain individuals from entering the United States — first from primarily Muslim countries, and later, from more African countries. Biden called the ban a “stain on our national conscience &mldr; inconsistent with our long history of welcoming people of all faiths and no faith at all.”

The Biden administration also reinstituted a plan to halt deportations of those who sought asylum from war-torn Liberia since 1991. The order ensures visa screening and vetting is not prejudicial, and strengthens interagency communication.

In a cautionary move, Biden enacted a regulatory freeze on any last-minute legislation from the Trump administration. The freeze, which makes such legislation subject to a 60-day review period, gives the new administration opportunity to review actions and analyze the facts and laws involved.

Another order makes the U.S. once again party to the Paris Climate Accord of 2015, which the U.S. exited in 2019. The agreement’s goals aim to reduce emissions and use of fossil fuels, which contribute to climate change. 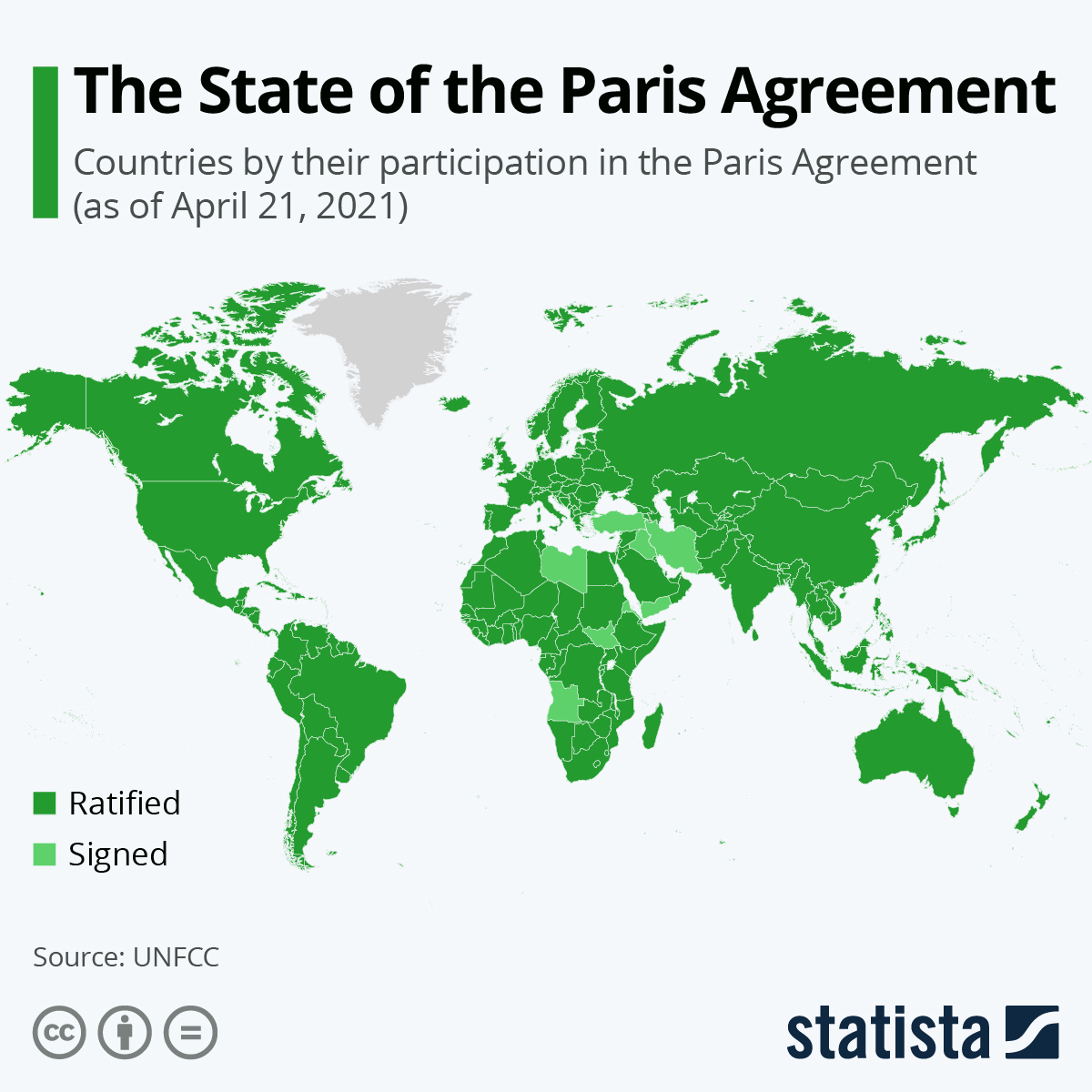 Biden also reentered the U.S. into partnership with the World Health Organization and appointed Dr. Anthony S. Fauci of the National Institutes of Health to the organization’s executive board as head of the U.S. delegation. This overturns a Trump administration decision to withdraw, which breached a decades-long partnership supporting vaccinations for common diseases globally.

The U.S. was the top donor, with voluntary contributions comprising 76% of the funds.

The pandemic response team disbanded by the Trump administration prior to the COVID-19 outbreak was reinstituted by a separate order. The National Security Counsel Global Health Security and Biodefense directorate was originally a monitoring and response task force for outbreaks and biological threats. Biden created several positions to coordinate with National Security Council.

He appointed Jeffrey D. Zients as official COVID response coordinator of the federal government response, and a second position reporting directly to the president for the national biodefense response. Biden bolstered data collection, information sharing, and transparency in another executive order Thursday.

An executive order now requires mask wearing and social distancing on all federal property. Biden stopped short of a national mandate, but launched a 100-day masking challenge. He urged state and local officials to enact measures to stop the spread of the coronavirus.

Among the actions was also an “Executive Order on Preventing and Combating Discrimination on the Basis of Gender Identity or Sexual Orientation,” citing Title VII in the original Civil Rights act of 1964.

The order “will fully enforce Title VII and other laws that prohibit discrimination on the basis of gender identity or sexual orientation,” according to the White House. The order applies to a broad spectrum of activities including sports, education, housing, and immigration.

Biden ended Trump’s 1776 commission, which released a controversial report on slavery in the U.S. and other history on Jan. 18, the day of the federal holiday celebrating Martin Luther King Jr.

Biden also revoked Trump’s limits on diversity and inclusion training within the federal government and contractor ranks. He appointed Susan E. Rice as director of the Domestic Policy Council to organize an interagency effort to root out racism in governance, and tasked all federal agencies to provide report on equity within the ranks within the first 200 days.

In continued response to the coronavirus pandemic, he acted to extend moratoriums on evictions and asked agencies to do the same for federally guaranteed mortgages — all lasting until the end of March.