“Where can we find light in this never-ending shade?” asked 22-year-old Amanda Gorman. 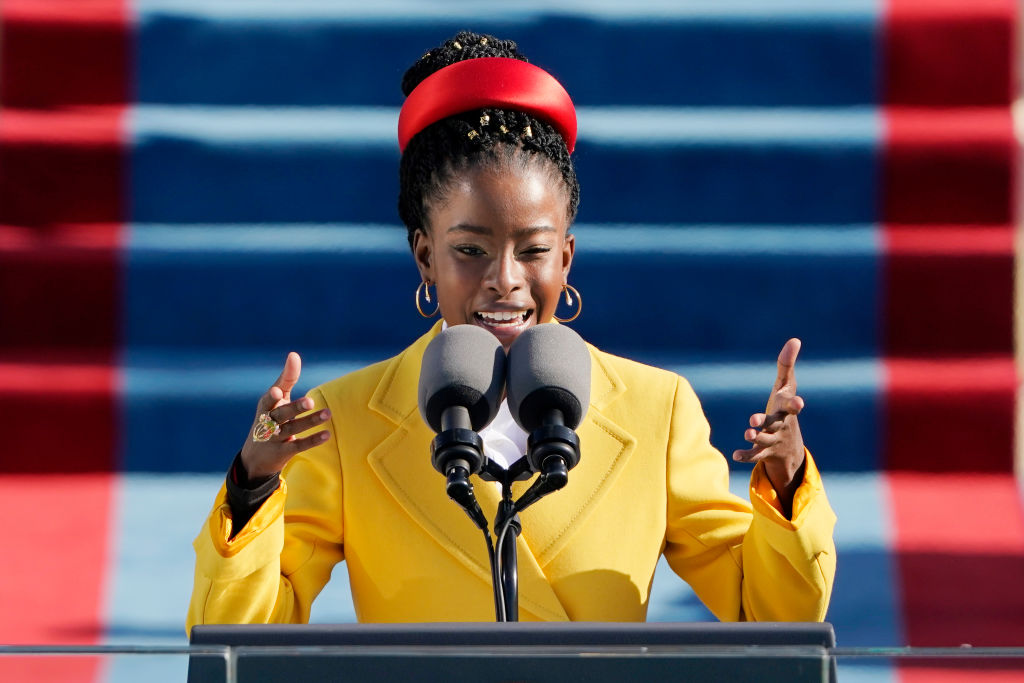 American poet Amanda Gorman reads a poem during the the 59th inaugural ceremony on the West Front of the U.S. Capitol on January 20, 2021 in Washington, DC. During today's inauguration ceremony Joe Biden becomes the 46th president of the United States. (Photo by Patrick Semansky-Pool/Getty Images)

When Amanda Gorman stepped up to the podium at President Joseph R. Biden Jr.’s inauguration ceremony, Capitol Hill fell silent. The 22-year-old then made history as she delivered a passionate reading of her poem “The Hill We Climb,” becoming the sixth — and youngest ever — inaugural poet.

Wearing a caged bird ring as a tribute to Angelou and a pair of earrings gifted to her by Oprah Winfrey, the young poet recited the heartfelt poem, which features in her debut poetry book, with a mature verve.

“We’ve seen a force that would shatter our nation rather than share it, would destroy our country if it meant delaying democracy. And this effort very nearly succeeded. But while democracy can be periodically delayed, it can never be permanently defeated,” Gorman read.

Her vibrant yellow outfit and sunny disposition reflected the optimistic tone of her poem, which she composed over the past few weeks but amended after the Jan. 6 Capitol riots. The poem encapsulated a sense of hope and national unity during a period that has proved U.S. democracy is delicate.

In preparation for the reading, Gorman studied the techniques of famous orators of America’s past, including Martin Luther King Jr., President Abraham Lincoln, and Frederick Douglass. Her resonant voice was also made stronger by her emotive hand gestures, a common practice in spoken word poetry.

The prose drew from Biden’s inaugural theme, “America United,” as Gorman recited lines of inclusivity and diversity: “We are striving to forge our union with purpose. To compose a country committed to all cultures, colors, characters, and conditions of man,” she recited.

Raised in Los Angeles, Gorman — like Biden — had to overcome a speech impediment as a child. Gorman’s mother, a middle-school teacher, consistently encouraged her daughter to read and write, which led to an early fascination with poetry. She became the first National Youth Poet Laureate in 2017, in a competition held at the Library of Congress, and later graduated from Harvard University with a degree in sociology.

With that background, her work often focuses on feminism, race, social justice, and the African Diaspora.

Yet the young poet’s powerful performance at the Capitol drew inspiration from her own experiences, too.

“We, the successors of a country and a time where a skinny black girl descended from slaves and raised by a single mother can dream of becoming president only to find herself reciting for one,” Gorman read.

The poet also called on Americans in all regions across the nation to “leave behind a country better than the one we were left.” Her poem also featured a line from scripture in George Washington’s farewell address, and two references to Lin-Manuel Miranda’s political musical “Hamilton.”

Still, her aptitude for poetry is just the beginning — Gorman wants to run for president in 2034.