KABUL, Afghanistan — Afghanistan, described as the deadliest country for civilians, has seen an increase in violence in recent months with a number of high-profile officials being targeted.

Most recently, two female judges from the Supreme Court of Afghanistan were killed by unknown assailants in Kabul on Jan. 17.  The judges, who have not yet been named, were targeted by two gunmen on a motorbike as they were driving to work in a court vehicle around 8:30 a.m.

Though no one has claimed responsibility, the Afghanistan government has blamed the Taliban for the attack. 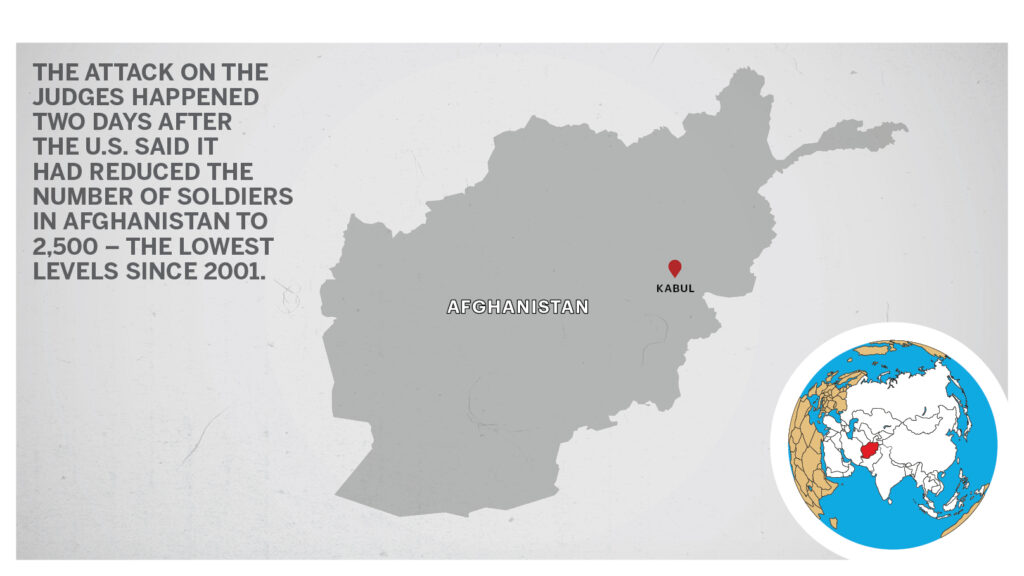 “Attack on any Afghan citizen, women, children, Ulama (Islamic scholar), influential figures is an attack on our honor and dignity,” President Ashraf Ghani said after the judges were attacked. “Coercion, terror, intimidation and criminality are not the solutions. It further deepens the ongoing crisis and escalates the conflict.”

The president called on the Taliban to agree to a “permanent ceasefire and demonstrate their will for peace in practice.”

The attacks occurred as Afghan-Taliban peace talks are being held in Qatar.

Human Rights Watch in a recent report called Afghanistan the “deadliest country for civilians” in 2020.

“Taliban attacks using improvised explosive devices were a leading cause of civilian deaths and injuries,” the report said. “The Islamic State armed group was believed responsible for several large-scale attacks on civilians.”

The killings follow a similar pattern in recent weeks, in which a number of prominent Afghans died in targeted killings in broad daylight, sending shock waves throughout the country.

In addition to a number of journalists targeted in the war-torn country, Freshta Kohistani, a prominent women’s rights activist and former provincial council member, was shot and killed in December along with her brother in her hometown of Kohistan district in Kapisa province.

Earlier that same month, a car bomb targeted Khan Mohammad Wardak, a member of parliament, as he was traveling through the Khushal Khan neighborhood, a western suburb in Kabul. Wardak survived, but at least nine people, including women and children, were killed. It was the third bomb blast within a week.

The attack on the judges happened two days after the U.S. said it had reduced the number of soldiers in Afghanistan to 2,500 — the lowest level since 2001.

“With a force of 2,500, commanders have what they need to keep America, our people and our interests safe,” a statement by Acting Secretary of Defense Christopher Miller says.  “Moving forward, while the Department continues with planning capable of further reducing U.S. troop levels to zero by May of 2021, any such future drawdowns remain conditions-based.”

“Afghanistan is still embroiled in a violent conflict with the Taliban, and there has not been any positive development in the peace process,” he said.  “The U.S. forces withdrawal has emboldened the Taliban and one can see the increase in violence.”

The Taliban leadership is thinking about how to keep President-elect Joseph R. Biden’s government under pressure to abide by the commitments made by U.S. President Donald J. Trump, he said.

“Afghanistan still needs international support, especially from the U.S.,” he said. “Troops on the ground will give confidence to the government and the Afghan security forces that the international community is still with them.”

T­­he Agreement for Bringing Peace to Afghanistan was signed between the U.S. and the Taliban on Feb. 29, 2020.

Condemning the killing of the two judges, Ross Wilson, U.S. chargé d’affaires to Afghanistan, called for a prompt investigation.

“The Taliban should understand that such actions for which it bears responsibility outrage the world and must cease if peace is to come to Afghanistan,” he tweeted.

The Supreme Court of Afghanistan experienced another attack on Feb.7, 2017, when a suicide bomber killed at least 20 civilians and wounded 41 others in a parking lot.

Gender-based violence against women and girls in Afghanistan has been linked to weak rule of law and to traditional cultural practices. The country has become an increasingly difficult place for journalists to work as they have faced reprisals from armed groups and security forces. At least five journalists have been killed in the past four months.