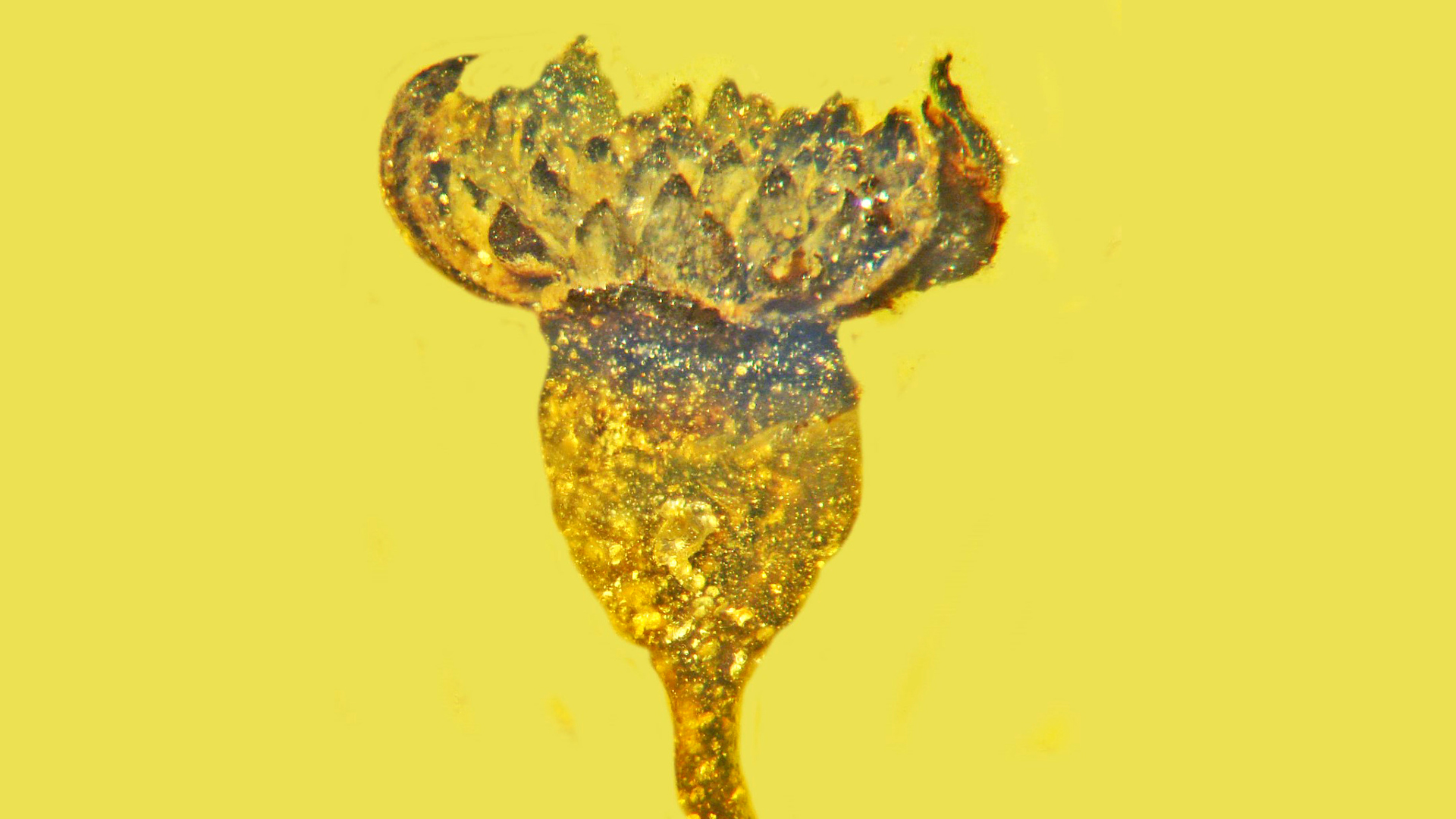 The flower encased in amber revealed by the study. (G. Poinar/Real Press)

Oregon, USA — A famous scientist has cautioned against bringing back dinosaurs to life using amber-encased DNA saying the giant creature could also bring back diseases – may be a prehistoric form of Covid.

Professor George Poinar Jr, an Oregan State University paleontologist who inspired the Jurassic Park books and films, has recently discovered a new species of flower – that existed some 100 million years ago – encased in fossilized amber.

“It depends on how degraded the plant DNA is. If not degraded, yes it would,” said Poinar on the possibilities of creating a new plant from its DNA encased in amber.

Amber is the hardened resin of ancient pine trees and is pale yellow to reddish or brownish in color. Hundreds of species of insects and plants have been found inside the fossilized resins.

The recent fossil was discovered from amber mines in the Hukawng Valley of Myanmar.

However, when asked the same about dinosaurs, he cautioned against the idea of bringing back the extinct giant species to life.

“We could bring back partial dinosaurs, mixed with DNA from present-day reptiles and birds since it is doubtful that enough dinosaur DNA would be viable. But, is it right to bring back extinct animals? What if they died of Covid-19 or another disease and it was still active in them?” he said.

While it may be theoretically possible one day to bring back other species, such as the extinct dodo, the expert said, “I worry about the pathogens they might carry.”

However, “it would probably be easier” to harvest plant DNA than that of an animal from amber, he said.

The plant that has been discovered by him and his colleagues is very different from the ones we know today.

“The structure and arrangement of the anthers are very different from those of today,” he said. Anthers are part of the stamen that contains pollen.

The flower has been named ‘Valviloculus pleristaminis’. Valva is Latin word for ‘a leaf on a door that folds’, while ‘loculus’ means a ‘compartment’. ‘Plerus’ means ‘numerous’ and ‘staminis’ is a reference to the dozens of male reproductive organs found on the flower.

“It is normal for most plants to have 10 or fewer stamens but this tiny flower, which is two millimeters across, has some 50 stamens arranged like a spiral, with anthers pointing toward the sky,” Poinar said.

“Despite being so small, the details are amazing,” said the expert, adding, “Our specimen was probably part of a cluster on the plant that contained many similar flowers, some possibly female.”

According to the legendary expert, most famous for having inspired Michael Crichton’s Jurassic Park book and subsequently Steven Spielberg’s movie of the same name, the flower was encased in amber on an ancient supercontinent known as Gondwana before traveling some 4,000 miles on a continental plate across the sea from what is now Australia to Southeast Asia.

“Thr region in the Southern Hemisphere, including Antarctica, South America, Africa, Madagascar, Australia-New Guinea, and New Zealand, as well as Arabia and the Indian subcontinent of the Northern Hemisphere were included in Gondwana or Gondwanaland. It was a supercontinent that existed between 500 and 180 million years ago,” states a research article published by the Earth Sciences Department at Royal Holloway, University of London.

So, is it possible that remnants of this plant may exist elsewhere in the world?

“Yes, definitely, it could occur in all the countries that were originally part of Gondwana,” Professor Poinar said.

Poinar, however, has identified this flower to be an angiosperm. He said given that angiosperm evolved and diversified around 100 million years ago, it is not possible that the West Burma Block broke away from the supercontinent before then. This is a considerably later date than what has been suggested by most geologists.

Angiosperms are “vascular plants with stems, roots and leaves, with eggs that are fertilized and develop inside the flower.”