There are only 50 to 249 Caninde macaws left in the wild.
By Maja Mishevska January 19, 2021
Facebook
Twitter
Linkedin
Email 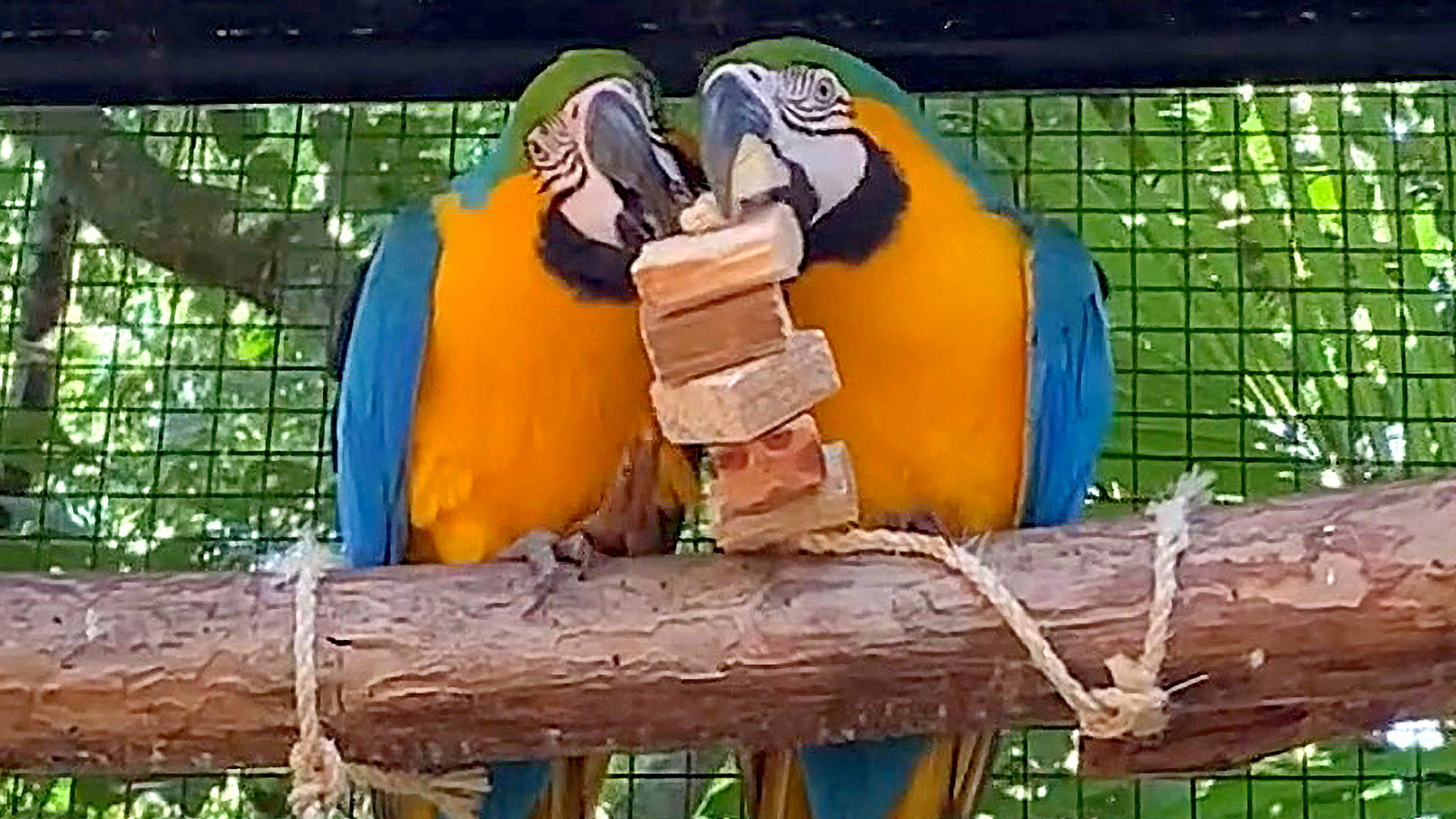 Parana, Brazil – Two blue-throated macaws were seen play-fight over a hanging wooden toy at Bird Park (The Parque das Aves) in the city of Foz do lguacu in the Brazilian state of Parana.

A video released by the Real Press shows two Caninde macaws, also known as blue-throated macaws and Wagler’s macaws, are engaging in a friendly ‘fight’ to win a wooden toy suspended on a branch.

According to BirdLife, a global partnership of bird conservation organizations, there are only 50 to 249 Caninde macaws left in the wild, which makes them a critically endangered species.

“There is evidence that the population is currently increasing moderately following successful conservation measures and near elimination of trade, which caused extremely rapid declines during the 1970s and 1980s,” it said in a statement. “However, given its longevity, the trend over the past three generations has still been negative and declines of over 80 percent during the period are suspected. Growth rate estimates generated by a Population Viability Analysis did not reach the rate of replacement needed for the population to remain viable in the long-term.”

Currently, most of the Caninde macaws live in Llanos de Mojos, a tropical region in northern Bolivia.

“There are two subpopulations: the northern subpopulation is found from west of Santa Ana eastwards across the upper río Mamoré, Beni, where the wild population was discovered in 1992, to the eastern savannas,” the statement said.

The southern subpopulation is found mostly in the Maraban province in Beni, close to the town of Loreto. In 2007, the total population was estimated to number 250-300 individuals occupying a range of 4,000 square kilometers, with 70 individuals discovered at a dry season roost site that year.

An estimated 1,200 or more wild-caught birds were exported from Bolivia during the 1980s, suggesting that the population was formerly much higher.

In the past, it was a severely threatened species due to exploitation for the national and international cage bird trade, though this has been radically reduced since 1984. However, in 2010, two poached macaws were uncovered and released into the wild.

The blue-throated macaw was listed as endangered under the US Endangered Species Act in November 2013. Live export from Bolivia discontinued from 1984, however, there were illegal exports till 2010. The Asociación Armonía/ Loro Parque Fundación parrot trade monitoring project has recorded reduced levels of trade in the species, “but the large scale illegal trade infrastructure in Bolivia means there is the potential to start trapping again if there is the demand.”