The region has received heavy rainfall since the beginning of the year.
By Iskra Petrush January 19, 2021
Facebook
Twitter
Linkedin
Email 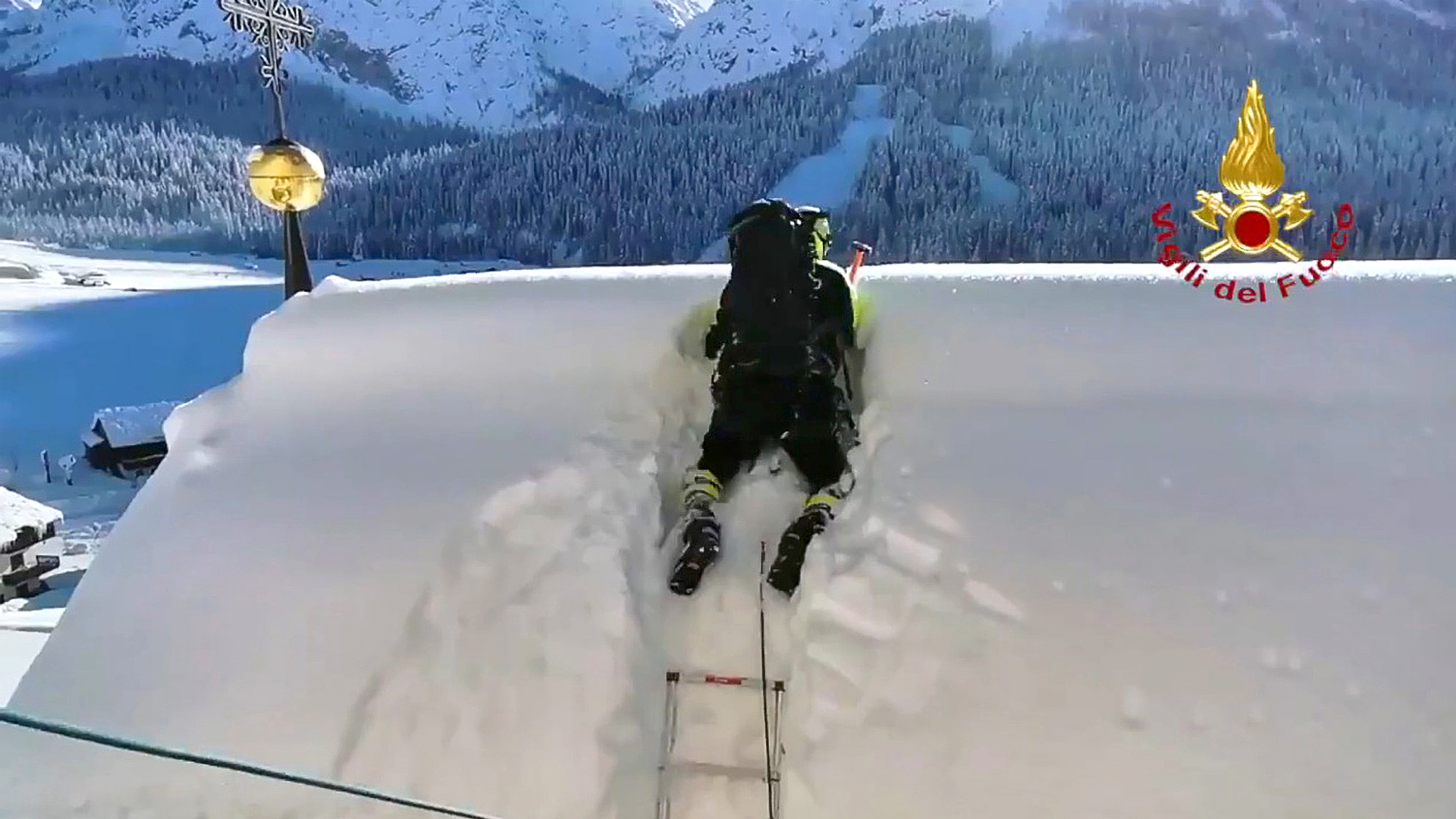 Interventions made by firefighters cleaning the snow from the roof of the church of Santa Margherita in Sappada. (emergenzavvf/ Newsflash)

Sappada, Italy — It was a busy day for firefighters who were tasked with cleaning up a thick blanket of snow off the roof of an iconic village church in northern Italy on Jan 9.

The cleanup operation took place at the Church of Santa Margherita in the commune of Sappada in the province of Udine located in the north-eastern Italian region of Friuli-Venezia Giulia.

The team carried out the operation successfully at a height of 30 metres (98 feet) in -6 degrees Celsius temperature.

The has been heavy snowfall in the region since the beginning of the new year.

Video footage captured by a drone camera shows the firefighters of “Vigili del Fuoco”, climbing atop the church to clear the thick cover of snow before it damaged the roof of the architectural masterpiece.

Firefighters had to cut the thick snow on the roof into blocks before sending the icy mass to the ground below, as seen in the clip.

The local authorities shared the video on Twitter on January 9.

“The interventions of the #vigilidelfuoco continue in the villages of Carnia to clear the snow on the streets and on the roofs of the houses: 200 rescues since the beginning of the Emergency,” reads the post.

The Vigili del Fuoco is Italy’s institutional agency for fire and rescue service. The complete official name is Corpo Nazionale dei Vigili del Fuoco. It is a part of the Interior Ministry’s Department of Firefighters, Public Rescue and Civil Protection.

The Corps is not just a firefighters’ force, but also has a role in civil defense. It also tackles risks from criminal acts committed with the use of nuclear, bacteriological, chemical and radiological weapons; to prepare fire-fighting units for the armed forces; to prepare national and territorial civil defense plans; provides services relating to the training of units responsible for the protection of civilians in war.

Fire prevention is entrusted to the exclusive competence of the Ministry of the Interior, which carries out its activities through the Department and the National Corps.

The firefighters have been busy helping mountain villages affected by heavy snowfall in the region since the start of the year.

Besides clearing snow off roads and home roofs, firefighters were also tasked with cleaning the roof of the iconic Church of Santa Margherita.

“The snow emergency ended on January 14 with about 230 interventions carried out,” says a media release by Vigili del Fuoco.

“The most affected municipality was that of Abetone-Cutigliano, where the heavy snowfalls created many problems for traffic. Teams from Pistoia and other Tuscan commands operated on the spot, supported by regional GOS (Special Operational Group) personnel consisting of eight units with one snowblower and two skid steer loaders who worked continuously from Jan 1 to 14, the release adds.”

The mountain village of Sappada is a perfect paradise for tourists looking for some calm, serene skies and beautiful landscapes. Located on the northern slopes of Dolomites, the village still preserves its old tradition and culture — wooden houses, Sappadino dialect and offers a glimpse of it to the visitors.

A paper published in the International Journal on Tall Buildings and Urban Habitat in 2012 described the causes and solutions for ice falling from skyscrapers. As buildings are becoming energy-efficient, they are releasing less heat, which results in colder exterior surfaces. This leads to a greater build-up of ice and snow on the building roofs and façades.