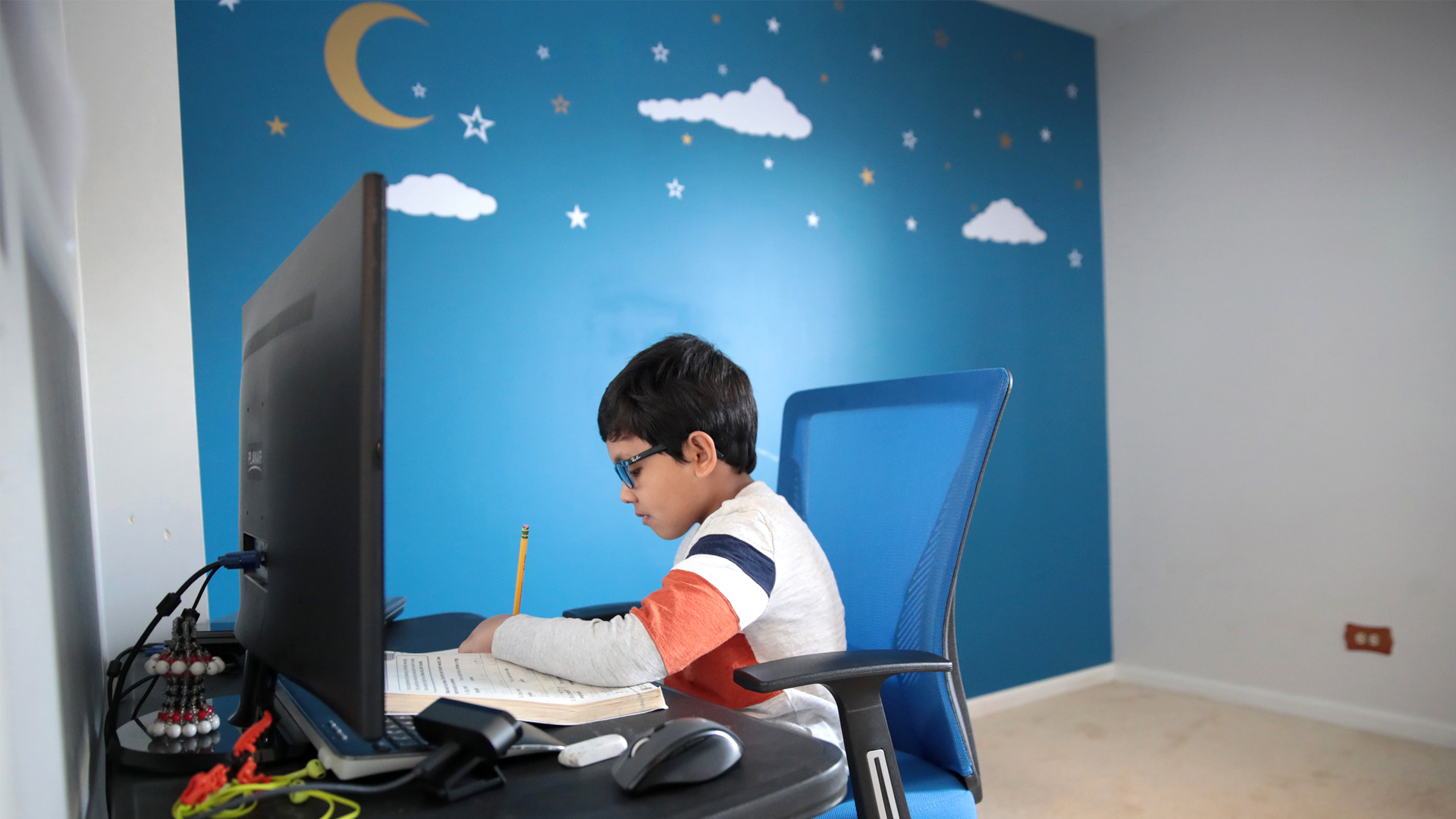 A student uses a computer to participate in an E-learning class with his teacher and classmates while at his home. (Scott Olson/Getty Images)

NEW DELHI — Mansi Ojha, a 21-year old student of biotechnology at Raipur in Chhattisgarh, was preparing for her master’s degree entrance exam for the Indian Institutes of Technology, a top-rung engineering institution, when India went into lockdown in March due to the pandemic.

Soon she had to head back home to Raigarh, as her coaching center shut indefinitely.

“As there aren’t any offline coaching centers in my hometown, I had to rely on online prep courses,” said Ojha, who has subscribed to Unacademy, an online coaching platform, which raised $50 million from venture capitalists in 2019.

Ojha chose the online platform, despite initial hesitation. “&mldr; In a few days, I realized how convenient online coaching is. Apart from the ease of attending classes as per my preferred time and location, the platform allows me to record the lectures and access them whenever I want.”

India’s coaching industry revenue is estimated at $4 billion per year, according to a special committee report in 2015.

The rush to join elite education institutes and increased competitiveness are two key elements behind the coaching industry’s success in India.  The economy of Kota, a city in Rajasthan, thrives solely on coaching centers.

Taking advantage of this opportunity during the pandemic for online classes, big corporate firms have hopped on the bandwagon.  From coaching for entrance exams to training school kids with coding, a wide range of offerings have been developed  — and now a tech giant has entered into the space in India

The beta version of Amazon Academy is available for free on the web and in the Google Play Store. The Android app has already been downloaded over a million times from the play store, according to news reports.

“Our primary focus has been on content quality, deep learning analytics and student experience. This launch will help engineering aspirants prepare better and achieve the winning edge in JEE.”

Amazon is also set to launch its computer science education program, Amazon Future Engineer, in India. The company posted an ad this month seeking candidates to lead the program for 12-months on a contractual basis.   The program offers young students the opportunity to enroll in coding camps; high school students can apply for computer science courses; and post-high school students may apply for scholarships and internships.

The Directorate General of Training in December partnered with Microsoft and the Nasscom Foundation to provide digital content for students of 3,000 industrial training institutes in the country.

Microsoft is facilitating the digitization of the entire content of a popular course, Computer Operating and Programming Assistant, through the Nasscom Foundation.

Facebook partnered with the Central Board of Secondary Education in July to provide online certificate programs in augmented reality and digital safety.

Meanwhile, many homegrown startups have entered the online computer-training niche, including WhiteHat Jr, Khan Academy, Toppr, Vedantu, and Unacademy. Venture capitalists pumped $1 billion into some of these ed-tech startups in the first six months of financial year 2020-21.

“The pandemic has only accelerated the adoption of online education, further pushing the online enrollments,” said S. S. Mantha, former chairman of the regulatory All India Council for Technical Education and chancellor at K. L. University in Andhra Pradesh.

Mantha, who is also on the advisory board of a few ed-tech startups, said the education sector in India crossed the $100 billion mark in 2020.  With almost 38 million students enrolled in higher education and 250 million enrolled in primary and secondary schools, the space for innovation is large, he said.

“With more big players jumping in, competition is going to be heated,” said Neetin Agrawal, co-founder of ed-tech startup Dronstudy.

“But it’s not going to be easy for these MNCs [multinational corporations]. The Indian ed-tech market isn’t homogenous. There are different segments in terms of affordability and willingness to pay, languages, the academic requirement of different students, aspirations of different parents and cultural values.  Despite the presence of multiple players, it is not ‘the winner takes all’ market for sure.”

However, the sudden spurt in course enrollments in some of the ed-tech companies is not without controversy.

WhiteHat Jr, an online platform on coding for kids, was asked by the Advertising Standard Council of India in October to pull down five of its advertisements for making dubious and unsubstantiated claims.

Pradeep Poonia and Aniruddha Malpani, vocal critics of the Byju’s acquired startup, are fighting defamation cases filed against them by WhiteHat Jr in November.

In what is being called one of the largest ed-tech acquisitions in the world, Byju’s will soon buy out India’s offline test preparation giant Aakash Educational Services Pvt. Ltd. for $1 billion, Bloomberg reported on Jan 12.

“The Indian end-user, especially in the education space, is well-informed and quality conscious. They would subscribe to the services of an ed-tech company that offers the best service-to-cost ratio and not necessarily in an Indian company. In this process, an Indian company would be challenged to deliver the best.”

«Previous Post
Curiosity County: A Mini Europe In The Heart Of Bengal»Next Post
Horror As Blaze Mum Uses Her Own Body to Shield Young Son From Flames