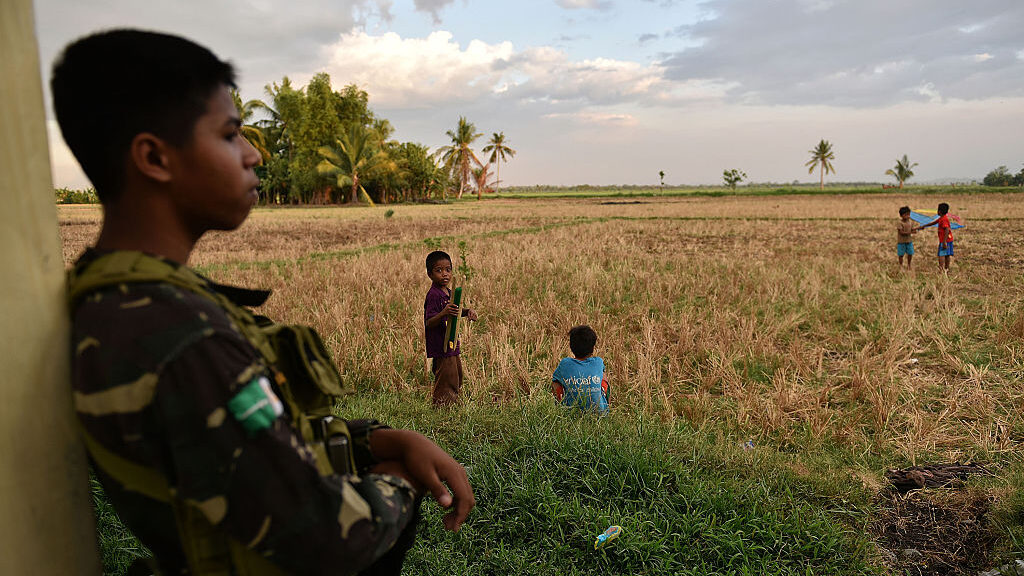 MAGUINDANAO PROVINCE, PHILIPPINES - APRIL 19: Moro Islamic Liberation Front armed forces takes a position on the lookout for Bangsamoro Freedom FIghters in Midsayap, North Cotabato on April 19, 2016 in Maguindanao Province, Philippines. For more than forty years, the southern region of Mindanao in the Philippines has been a battleground for numerous Islamic secessionist armies and terror groups. One of the most radical of Islamic separatist group in Southern Philippines, Abu Sayyaf, beheaded a Canadian man on 25 April 2016 after they took him hostage along with three others in September 2015. Widespread injustice and oppression to Muslim communities and their land continues to cause vulnerability in the region to extremist ideas such as ISIS. Despite ongoing peace talks between rebel groups and the Philippine government, militants such as the Moro Islamic Liberation Front continues to push for an autonomous Islamic region in restive Southern Philippines. (Photo by Jes Aznar/Getty Images)

Three years after one of its largest cities was ravaged by terrorists, the Bangsamoro Autonomous Region in Muslim Mindanao is working to begin a new chapter. Around the globe, fumbled responses to COVID-19 have seen citizens lose faith in government. Yet, the crisis has given the regional government an opportunity to legitimize itself.

“For too long, all the people of Bangsamoro have not been able to shape their own destiny. The [government] offers a new opportunity for the region, even if the coronavirus has proven to be a trial by fire,” said Muedzul Lail Tan Kiram, the sultan of Sulu.

The regional government was established in 2019 as part of a peace agreement meant to end decades of insurgency and ineffective regional government. It includes Mindanao, the largest island in the Philippines. The majority of its 4.2 million people are Muslim. For centuries, the region was ruled by various monarchies until Spanish and British imperial ambitions collided.

In the late 1960s the government of Philippines President Ferdinand Marcos began secretly training soldiers for clandestine action against Malaysia in support of a border conflict. Much of that unit was killed in a 1968 massacre, sparking a nationalist insurgency. More than 120,000 lives were lost in nearly a half-century of conflict that symbolically ended when President Rodrigo Duterte recognized Al Haj Murad Ebrahim, chairman of the Moro Islamic Liberation Front, a rebel group, as interim chief minister of Bangsamoro’s interim government last year.

Bangsamoro’s mineral resources are under-explored, though some estimates of potential oil reserves would put it on par with some OPEC members. The region is also home to sizable coal reserves but, with both hydrocarbons considered environmentally unsound, the development plan instead focuses on and agriculture. Such opportunities include seaweed production and fishing. On land, exotic crops like lanzone and marang fruit, coconuts, coffee and dozens of others are grown commercially.

“The region is still rife with instability generated by lingering socioeconomic issues, ethnic and clan clashes, as well as by other rebel groups, many of which swore allegiance to the Islamic State,” said Enrico Cau, a scholar with the Center for Politics and International Affairs in the Philippines.

The region’s recent history offers a cautionary tale. ISIS-aligned forces stormed the normally peaceful town of Marawi in May 2017. The next few months saw some of the most intense urban combat in Southeast Asia since the 1968 Battle of Hue during the Vietnam War. Within three months there were fewer than 40 terrorists dug in among the urban rubble, but the battle dragged on.

The Filipino armed forces received international aid during the battle, including input from U.S. special forces advisers and intelligence support from Israel and Australia. China and Russia also made conventional arms deliveries to the country during the siege. Although the guns have fallen silent, some 1.1 million people were displaced as a consequence of the battle and thousands continue to live in temporary shelters. Filipino combat engineers were deployed this summer to help build new permanent shelters for the 126,835 individuals who, according to the United Nations, are still displaced.

Another challenge is the demobilization of the Moro Islamic Liberation Front’s 40,000 fighters. ISIS militants have launched strikes against the rebel group. The government has responded by offering cash assistance, health education and other benefits to former fighters. Some rebel camps will also be recognized as new rural communities.

The government’s plan calls for a reduction of the poverty rate in the region to 49.6% by 2022, a goal that experts say may well be achievable even amid the COVID-19 pandemic.

For many in the war-torn region the Bangsamoro government doesn’t need to be perfect, but must avoid consequential mistakes. The Philippines is projected to be the world’s 16th-largest economy by 2050, according to the banking giant HSBC.