The 10 climbers are the first to summit the “savage mountain,” K2, in winter.
By Raza Hamdani January 18, 2021
Facebook
Twitter
Linkedin
Email 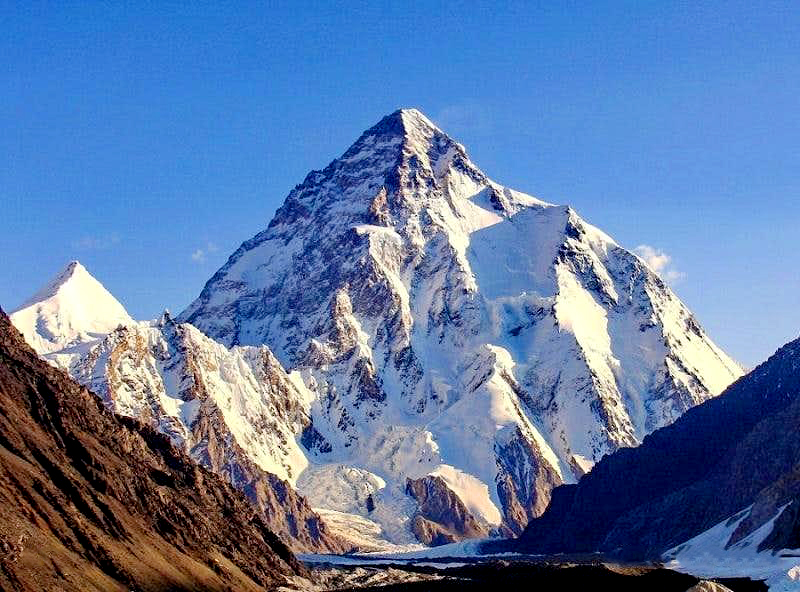 ISLAMABAD — Ten climbers from Nepal have set a record by summiting the world’s second-highest mountain in winter.

K2, which straddles the Pakistan-China border at 8,610.9 meters (28,251 feet), is 238 meters shorter than Mount Everest but is widely considered the most difficult and the most dangerous big peak for climbers. It has been referred to as the “savage mountain” since American climber George Bell described it as such after his failed summit attempt in 1953.

Part of the Karakoram range, K2 was the last of the 14 peaks taller than 8,000 meters to be summited in winter, “one of the biggest unclaimed prizes in mountaineering,” according to a 2019 article by National Geographic.

The 10 Nepali climbers were among more than 60 mountaineers from 18 countries who had assembled at K2 base camp in mid-December.

A Spanish climber died during the ascent. 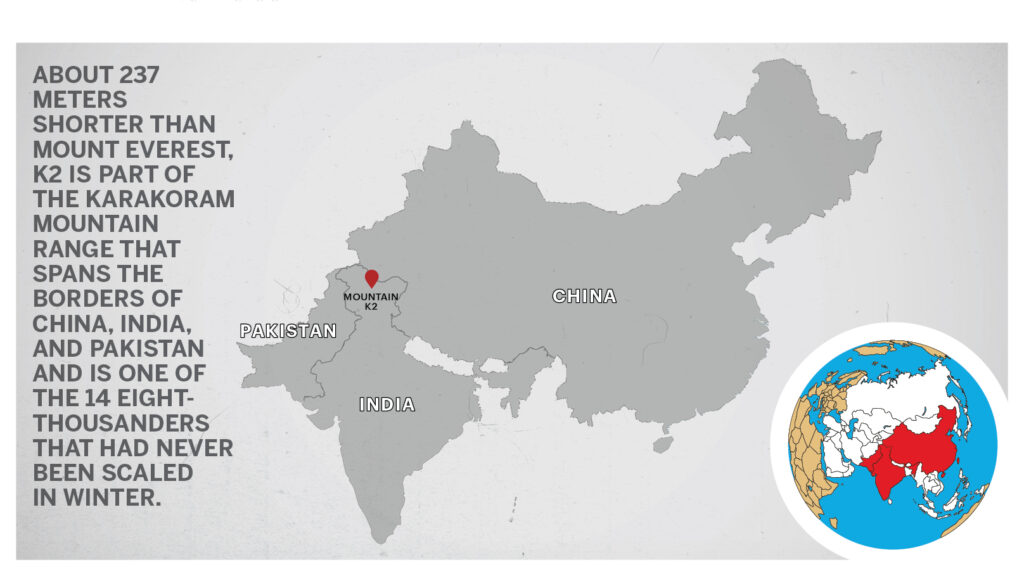 “Mountaineer Sergi Mingote fell to his death while climbing between two camps on K2,” said Karrar Haidri, secretary-general of the Alpine Club of Pakistan. Mingote reportedly fell some 600 meters. His body was airlifted from base camp on Jan. 17, Haidri said.

Mingote had been attempting to summit all 14 peaks above 8,000 meters without supplemental oxygen, in 1,000 days.

The 10 climbers from Nepal initially belonged to different teams, but then joined as a single team representing their country. Nirmal Purja, also known as Nimsdai, posted a photo of eight members of the team on the summit at 17:00 hours local time on Jan. 16.

“A very special moment. The whole team waited 10m below the summit to form a group, then stepped onto the summit together whilst singing our Nepalese National Anthem,” he wrote. “We are proud to have been a part of history for humankind and to show that collaboration, teamwork and a positive mental attitude can push limits to what we feel might be possible.”

“For decades, Nepalis have assisted foreigners to reach the summits of the Himalayas, but we’ve not been getting the recognition we deserve,” said Kami Rita, a Nepali sherpa who holds the record for summiting Mount Everest — 24 times.

“It is wonderful that 10 Nepalis have made history and shown our bravery and strength,” the sherpa said.

The temperature on mountains in the 8,000-meter range can drop to minus 60 degrees Celsius (minus 76 Fahrenheit), and winds can reach more than 125 miles an hour.

Unlike Everest, all sides of K2 are extremely steep and prone to frequent rockfalls and avalanches. Until Mingote’s death this month, 86 climbers had died during attempts to climb K2, according to Haidri.

In August 2008, 11 mountaineers on K2 died in an avalanche, said to be the single worst accident in the history of K2 mountaineering. As 17 mountaineers were descending, a moving river of ice broke loose, knocking down the fixed rope the group had been using. Two climbers caught in the avalanche were ascending the mountain.

The site of the accidents, about 1,000 feet below the summit, is a bottleneck that climbers call the “death zone.” Bodies cannot be recovered from there because of freezing conditions and lack of oxygen at such a high altitude.

Meanwhile, many mountaineers are still lining up to summit the “savage mountain.” Only 367 climbers have summited K2 in summer.

“I wish success to the other mountaineers in their quest. The successful summit of the world’s second-highest mountain will boost tourism in GB,” Muhammad Khalid Khurshid Khan, chief minister of Gilgit-Baltistan, said in a tweet. “It will be a new dawn of winter tourism in the region.”