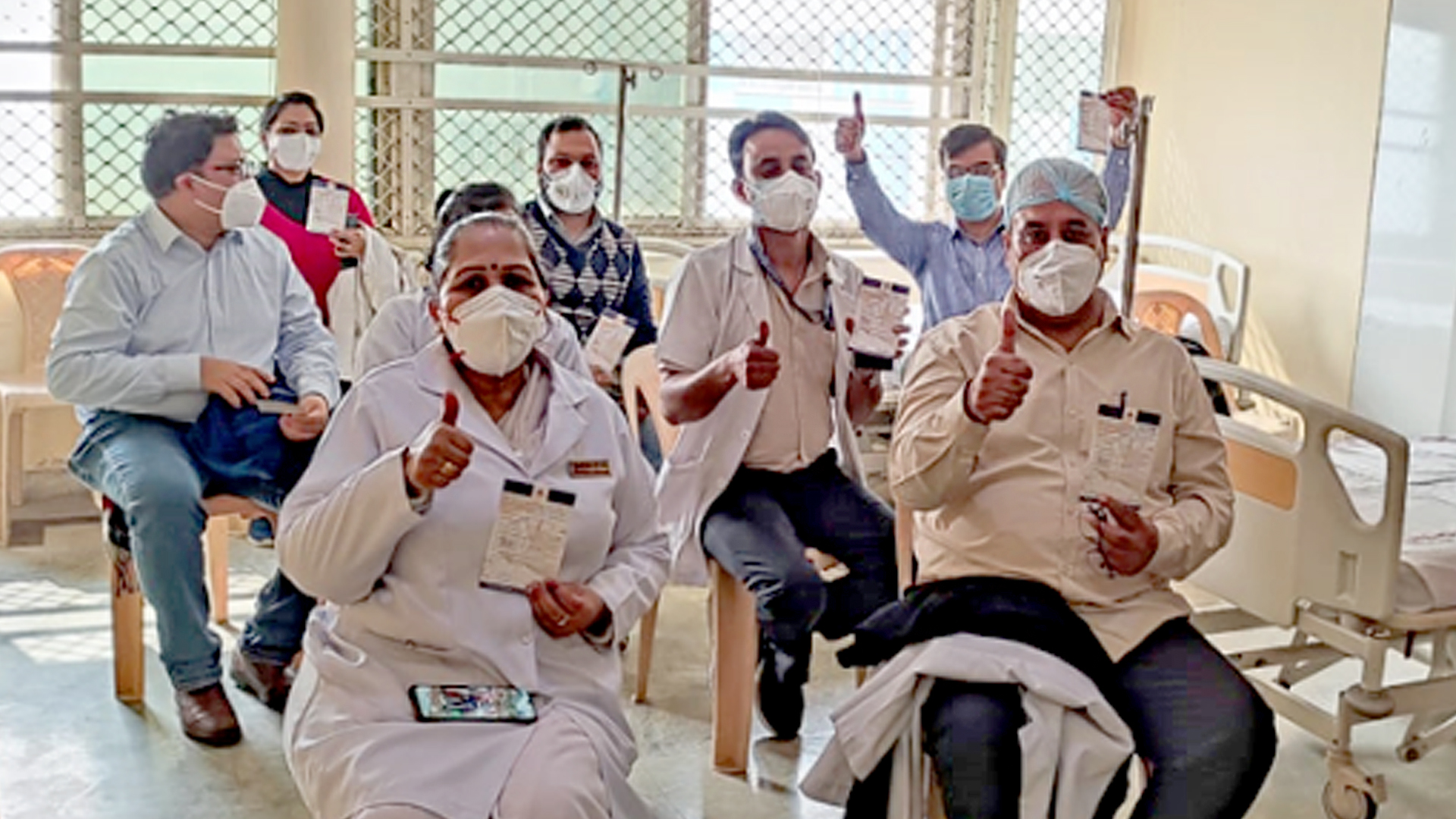 Benificiaries waiting to get the Covishield vaccine in New Delhi on Jan. 16 (Medha Sharma)

PUNE, India — “We have seen many deaths in the past months, and so I decided to take Covaxin, and encourage others to come forward and take the Covid-19 vaccination,” said Nandu Krushnarao Satpute, a 35-year-old medicinal practitioner at Aundh Government Hospital in India’s western city of Pune.

“I am completely fine after the shot.”

Drawing from its experience in large-scale immunizations and elections for the world’s largest democracy, the government involved tens and thousands of officials from across ministries.

Manish Kumar, a 34-year-old sanitation worker at All India Institute of Medical Sciences (AIIMS) in the capital New Delhi, was the first to get vaccinated against the disease that has infected some 10.5 million — the largest caseload after the U.S. — and killed nearly 152,000 people in India.

“Taking on Covid duties was a scary initially, but now there won’t be any hesitation,” said Kumar.

Kumar was part of the priority group of 10 million healthcare professionals and 20 million other frontline warriors like defense personnel, police, and civic workers to get the vaccines first.

“My family members were skeptical since I would be one of the first beneficiaries of the vaccine,” said Liladhar Ramchandani, secretary-general of Delhi Nurses’ Federation, who got a jab at GB Pant Hospital in New Delhi.

“They wanted me to get vaccinated in the second phase, which is 28 days later, but I assured them. Everything went well.”

On day one, more than 190,000 healthcare professionals rolled up their sleeves for Covishield and Covaxin — the two locally produced vaccines that the government has approved so far.

While Covishield has been developed by the University of Oxford and British-Swedish pharmaceutical company AstraZeneca, Covaxin is developed in India by Bharat Biotech in collaboration with the Indian Council of Medical Research and the National Institute of Virology.

India began the vaccination drive during the declining phase of the pandemic, which saw its peak in September.

The government plans to cover 300 million people — roughly the U.S. population — by August. This will include those over 50 years of age and people with co-morbidities.

India has to immunize its 1.3 billion people in phases, which experts say would take several months.

Throwing open the inoculation drive, Modi, in a virtual address, said the disease “separated people from their families.”

“Some couldn’t go home for days, and hundreds never went back home. Those who died didn’t even get a final goodbye from their loved ones that they deserved.”

“By giving the first shot to healthcare workers, the society is, in a way, paying back,” Modi said while asking people to stay away from “anti-vaccine propaganda”.

Locally developed Bharat Biotech’s Covaxin has got approval for emergency use by the country’s drug the regulator even when the last leg of trial results is still awaited.

Modi said Indian vaccine developers have global credibility so much so “live-saving vaccines made in India are given to 60 percent of children globally.”

“This is the beginning of the end of the pandemic,” said Randeep Guleria, director, AIIMS, after taking a Covaxin shot.

Guleria, who is also a member of the national Covid-19 management task force, took the shot in the presence of India’s Health Minister Harsha Vardhan.

“Though I’m a doctor, I have not been practicing. I will wait for my turn, just like our prime minister,” Vardhan said.

Those taking Covaxin were asked to sign a bond.

“In phase-1 and -2 clinical trials, Covaxin has demonstrated the ability to produce antibodies against Covid-19,” the bond said.

“However, the clinical efficacy is yet to be established and it is still being studied in phase-3 clinical trials. Hence, it is important to appreciate that receiving the vaccine does not mean that other precautions related to Covid-19 need not be followed.”

“It is possible that people are being used as part of the phase-3 trials for the Covaxin,” Satpute of Aundh Government Hospital said.

This hospital was one of the many sites in India that got Covaxin.

The bond also says compensation will be paid by Bharat Biotech in case any serious adverse effect “is proven to be causally related to the vaccine”.

Adar Poonawalla, chief executive officer of Serum Institute of India that manufactured Covishield in its facilities near Pune in Maharashtra, took a jab to endorse its safety.

Vaccination sites were heavily guarded. Most centers were plastered with “Covid-19 vaccine is safe” and “When we are safe, the nation is safe” posters.

In Delhi, all the 81 vaccination centers were asked to submit details of the beneficiaries months in advance.

The registration of the same was done on the Covid Vaccine Intelligence Network (CoWIN) mobile app that was developed to monitor the mammoth inoculation process.

Shortlisted recipients got a text message to confirm their slots. Upon reaching assigned vaccination sites, the grantees had to confirm their identity and after temperature checks and sanitization, they got their jabs.

As the day progressed, there were reports of glitches on the CoWIN app relating to missing names of beneficiaries at some hospitals, while confirmation messages were not sent to many.

“Mapping and registration of the patients was done through the CoWIN,” Ashok Nandapurkar, civil surgeon, Aundh Government Hospital, said.

“Beneficiaries within a certain area received text messages for the nearest vaccination center. There was a technical error, and many did not receive text messages, and for them, manual phone calls were done by the hospital staff. It was a technical issue, which was resolved.”

Before beginning the exercise on Jan. 16, India had scaled back the number of vaccination sites to 3,006, where 100 people were to be vaccinated on day one, from the initially planned 5,000 to keep teething troubles to bare minimum.

“Since I’m doctor, I had the liberty to get vaccinated on the very first day,” Maji, who got Covishield shot, told Zenger News.

“Today is a big day. It seems we are slowly coming out of the pandemic. Those getting jabs were put under a 30-minute observation before being let off.”

“After 28 days, they will be getting the second dose of vaccination,” Sushma Aighole, a nurse who vaccinated 48 people on day one at the Aundh Government Hospital, said.

“Even after vaccination, all the protocols, such as wearing a mask, and using sanitizer are mandatory.”

“We are not pushing the vaccines on those who have even the slightest symptoms of Covid-19,” Raghunath Mishra, medical superintendent-cum-vice principal of SSKM Hospital in Kolkata, said.