Squawk About Brave: Woman Rescues Parrot 70ft Up a Tree With Firefighters’ Ladder 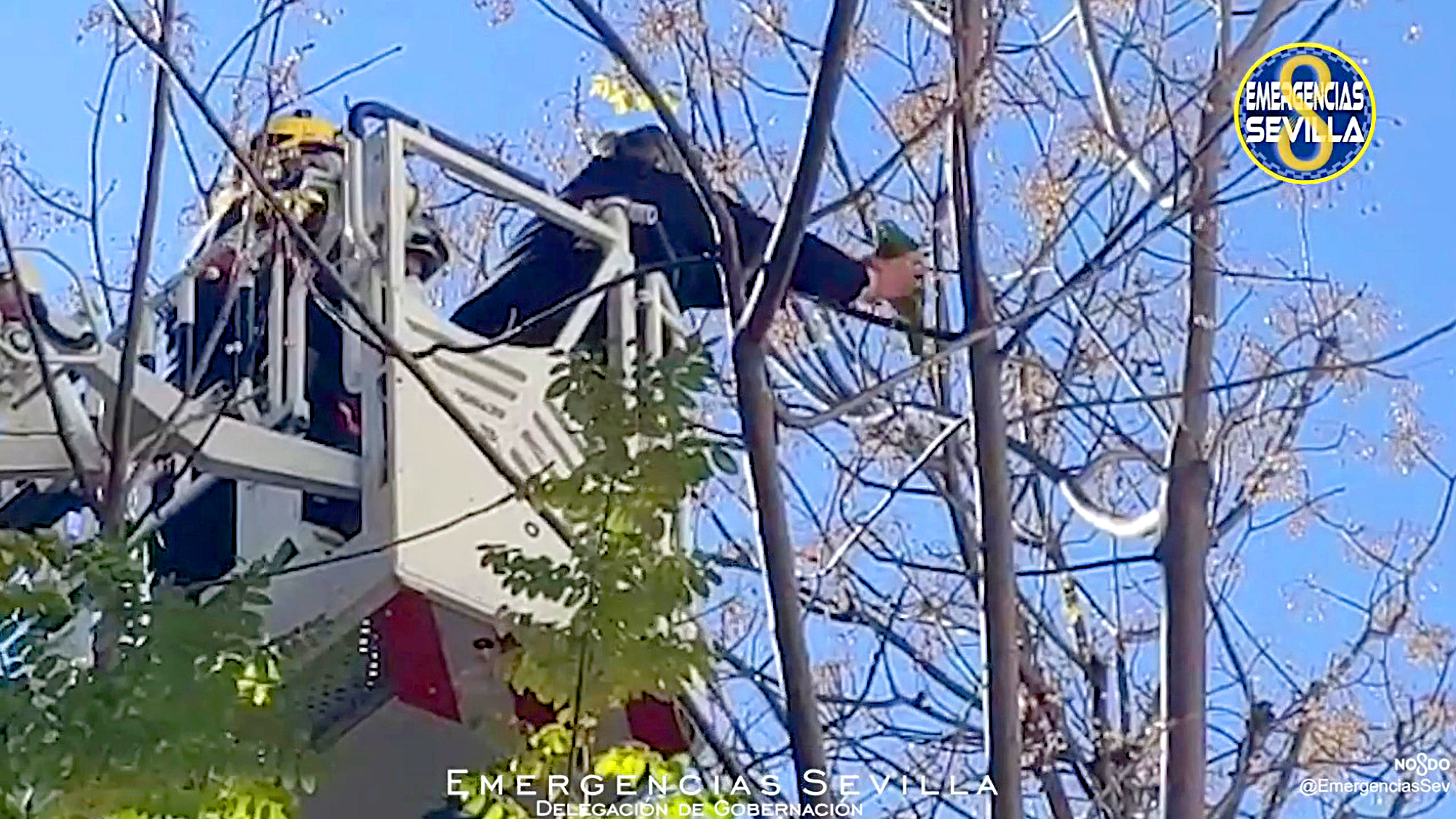 Moment of the rescue of the parrot. (Emergencias Sevilla/Newsflash)

Sevilla, Spain – A parrot owner managed to get back her beloved pet from the top of a tree with the help of a fire engine crane as residents, including a group of schoolchildren, looked on and cheered.

The incident took place in the neighborhood of Triana in the city of Seville in the southern Spanish region of Andalusia as local children were making their way home from school on Monday.

“I always have it in here with me, but as it was too cold, I put it out so that it could get some sunlight,” Caridad, the owner of the parrot, said.

Caridad, who also owns a kiosk in the area, usually keeps her pet parrot Yaco indoors with her where it is safe.

The bird was tied, but it managed to free itself and fly to a nearby treetop, she said.

“I could not stop crying”, said Caridad, adding that she was “ready to climb whatever was necessary” to get her parrot back.

Firefighters were called to the scene and elevated Caridad to the bird’s position at the top of a tree on their crane.

“I suffer from vertigo, but I’d do whatever it takes for my parrot,” she said.

Vertigo is a health condition, in which you feel dizzy and may go off balance.

The woman eventually managed to grab her beloved bird and gave it a teary hug as onlookers cheered.

Caridad and Yaco are well known in the neighborhood.

“Yaco comes with me to the bar for breakfast,” said Caridad and thanked the police and firefighters for their help.

In what could be the other side of the pet story, birds reared in captivity or caught in wild go through trauma, states www.idausa.org.

Parrots look beautiful, are intelligent and learn tricks and entertain people. They are chosen as pets or companions by some people. On the pet chart, they stand at the third place in the USA, states the In Defense of Animals USA, an international animal protection organization.

Captive breeding does not soften parrots’ wild qualities as they are inherently wild. They use their loud vocalizations to communicate with flocks at distance and mates. Some bigger parrot species have raucous screams, which can be heard from far away. Their repetitive screams can be annoying at times, said the non-governmental organization.

One comes across advertisements on the internet, in magazines, and in newspapers, selling parrots. Most “pet” parrots do not survive their first year in captivity while others die prematurely due to neglect and abuse.

Surviving pet parrots are often neglected and become lonely. Despite these deplorable conditions they live in, breeders continue to breed them. In fact, markets are daily flooded with millions of baby parrots, states In Defense of Animals USA.

Parrot live from about 20 to 85 years. This compounds their problems after they are kept as pets.

Those who make money by selling them do not reveal these facts to pet owners. This does not change the reality that parrots as pets need huge attention and care.

The volume of illegal live parrot trade seizures worldwide, by genus from 2007 to 2014 shows how much the bird is in demand as a pet. In all, 4,779 live African grey parrots were seized during the period. Among the other parrot species seizures, there were 2,149 Aratinga and Eupsittas, 1,482 other genera, 1,373 Amazons, 800 Monk parakeets, 457 Brotogeris, and 333 Macaws during the said period.

“It is estimated that 40 million birds in the U.S. are kept caged and often improperly cared for—bored, lonely, and a long way from their natural homes,” states Peta on its website.

“In the wild, these beautiful beings are never alone. If they become separated from their flock mates for even a moment, they call wildly to them. They preen each other, fly together, play, and share egg-incubation duties. Many bird species mate for life and share parenting tasks,” says Peta.