VIDEO: Can’t Bear That Itch: Not so Grisly After a Woodland Scratch

Brown bears communicate with each other by rubbing their backs against tree trunks.
By Uran Dulatahi January 16, 2021
Facebook
Twitter
Linkedin
Email 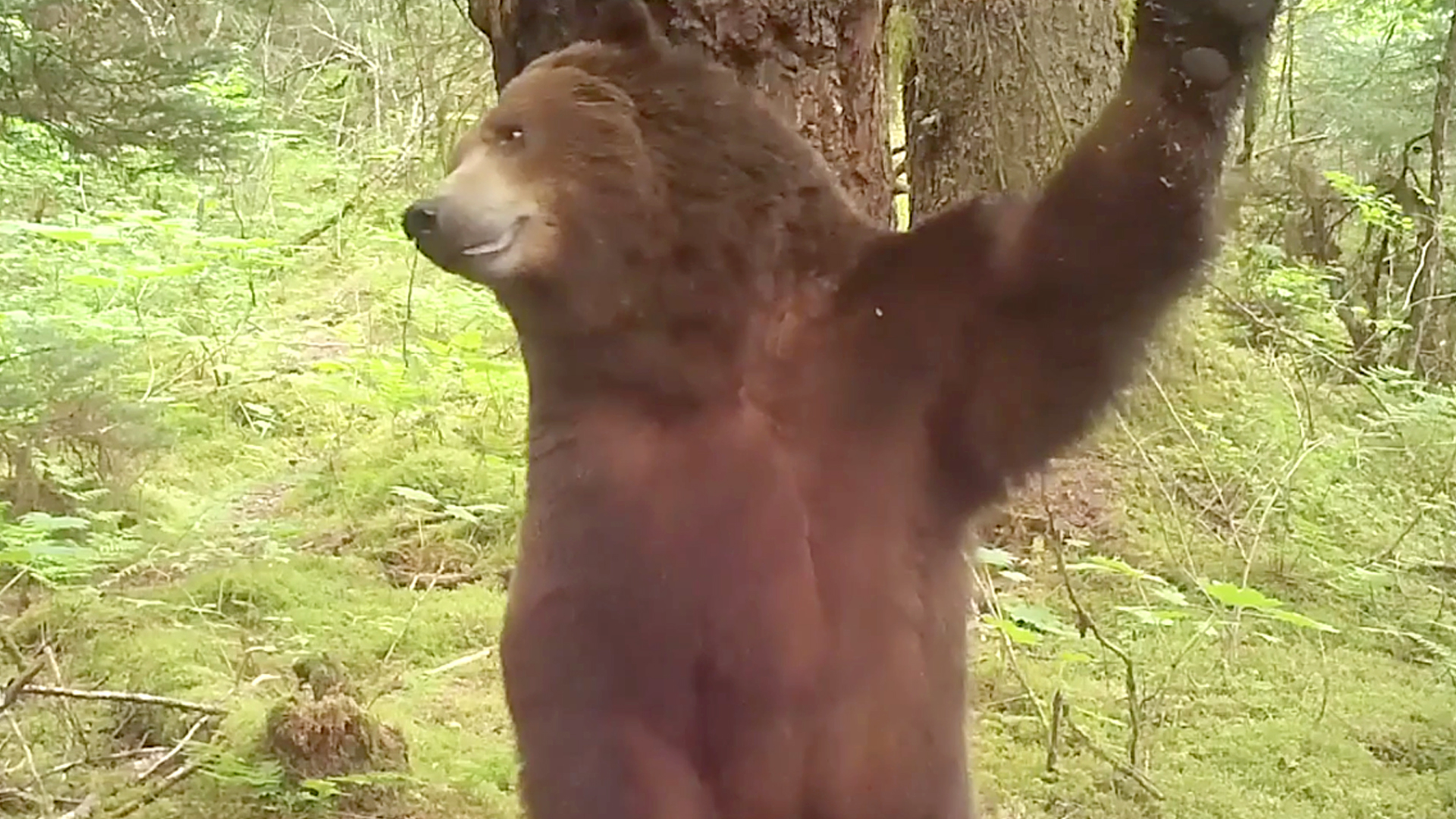 Brown bear stretches and rubs his back against a tree. (Glacier Bay National Park/Clipzilla)

Alaska, USA – The remote camera set up by scientists in the Glacier Bay National Park and Preserve has captured a brown bear casually rubbing its back against a forest tree in Gustavus, Alaska, on Jan 11.

Remote cameras are fixed on trees to track behavioral habits of wild animals.

The video footage from the camera trap, which lasts for 55 seconds, has been posted on the park’s Facebook page. It shows the brown bear standing on its hind legs and holding a twig and scratching its back against the trunk of a big tree. While doing so, it sticks out its tongue, then pauses and looks towards its right side for a few seconds.

It again starts rubbing the back, sliding a little downwards, looking up and then sits down and takes a pause while again watching on its right side. Then it again stands on its hind legs and starts scratching its back for some more seconds. Finally, it stops the activity and walks away towards its left side out of the camera. One can hear only the rustle of the trampling of dry leaves under the animal’s feet for some more seconds. Then the video ends.

Scientists use camera traps as an indirect method to identifying tracks, burrows, or scat of hard-to-see animals that move in the darkness of night or are very shy.

Remote cameras, also known as trail cameras, help in estimating the population of wild animals and understand patterns of their activity.

In this instance, Brown bears communicate with each other through such scratch marks left on trees. The wild animal’s scientific name is Ursus arctos. Its average height measurement is 3.35 feet to shoulders. A brown bear usually weighs up to 0.75 ton. Its length is around 6.5 feet. Brown bears’ habitats are Tundra region, mountains, forests in Arctic, polar regions.

They have the ability to stand on their two legs. They walk on the soles of their feet and use “fingers” to hold or pick things up. They are among the largest living carnivores. However, hunting and conflicts with humans have made them vulnerable.

The population of brown bears is stable, at present. They still top the conservation chart. Due to their habitat in large natural areas, brown bears become vital management indicators for many other wildlife species. By hunting other animals, Brown bears help control their populations. Moreover, brown bears contribute to preserving their own environment by dispersing plant seeds.

Earlier, they were hunted for their meat, hides, and as a game trophy. However, habitat destruction and persecution are threatening this wild animal.

Brown bears come in conflict with humans due to the latter’s expansion into the former’s natural habitat. They are harmed as they are considered a nuisance. Development activities such as logging, construction of roads, mining, along with human efforts to keep brown bears at bay from livestock, farms, water bodies, and garbage adversely impact this animal’s numbers.

The brown bear is spotted in the video in the Glacier Bay National Park and Preserve, which is its habitat. The park has the Arctic’s most amazing scenery from the glacial fjord to the highest peak, and wildlife.