Commuters were in for a surprise when they saw the giant bird zigzagging through traffic
By Raza Hamdani January 16, 2021
Facebook
Twitter
Linkedin
Email 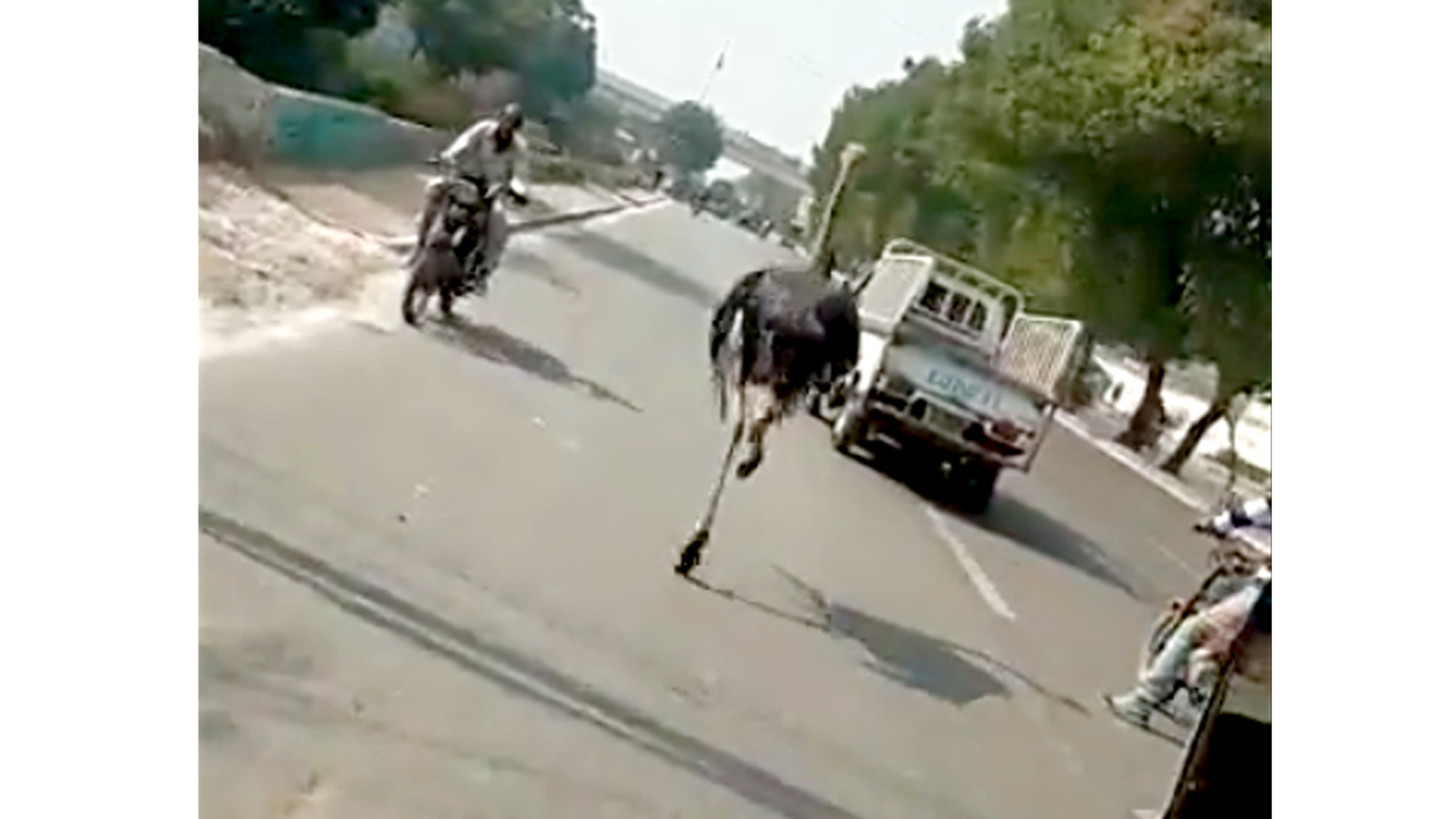 A screenshot from a video of an ostrich running down the roads of Karachi. (Al Syed Birds & Pets)

KARACHI, Pakistan — Imagine driving down the road, amidst two-, three- and four-wheeler vehicles, in a city of over 16 million people, and suddenly seeing an ostrich run past you.

This happened in Karachi recently, a metropolitan city of Pakistan, when car drivers and motorcyclists not only had to be mindful of other vehicles plying on the road but also an ostrich.

An ostrich managed to flee from a private zoo from Korangi, a congested area located in the eastern part of Karachi, in broad daylight.

The bird managed to escape the Al-Syed Birds & Pets private zoo and frantically ran on the roads of Korangi. The owner and employees of the pet store could be seen on motorbikes in pursuit of the bird.

The video of the great escape was made by someone on a motorbike and was shared on social media. Needless to say, it went viral.

Laraib Ali, the owner of Al-Syed Birds & Pets, told Zenger News that the caretaker did not close the enclosure gate properly and the bird fled.

“Four of us were chasing the bird on motorbikes,” Ali said, laughing. “But as time passed, more bikers joined us in our pursuit and soon it became a caravan of motorbikes and cars.”

He said the video was made by someone in the “caravan”. They had only one thing on their minds – how to capture the runaway.

The bird ran over two kilometers before being captured, Ali said.

“It is an expensive bird, and it was zig-zagging in the traffic,” Ali said. “We were shouting and warning the other drivers. Frankly, we were only worried about the expensive bird lest it had an accident.”

Ali has six ostriches and plans to sell their eggs. People in Pakistan often acquire huge tracts of land and breed birds and other animals as it is legal to do so.

People in Pakistan can keep birds for breeding or other reasons, but they need to have permits if they have a mini zoo, Sindh Wildlife Conservator Javed Mahar said.

“In case of ostriches, no license is required,” he said. “However, if you are keeping animals like lions and tigers or even a giraffe, you need to have permits.”

Ali bought the six ostriches when they were hardly two months old. “I bought them for PKR 19,000 ($118) from a breeder in Punjab. They eat about 20 kg of spinach and corn besides grass every day. It used to be cheap but now prices are skyrocketing, so it is becoming expensive to keep them,” Ali said.

In the video, a stunned traffic police officer is seen looking at the ostrich run, perhaps wondering if the bird was breaking any law.

However, the only traffic violation by the ostrich was changing lanes quite frequently, unlike a couple of bikers who could be seen coming down the wrong way in the video.

Police was not involved in the capture of the bird as Ali and his team managed to do so. However, Ali said that once the video went viral, they were afraid that police might approach them, but they did not.

“After running about two kilometers, the bird slipped,” Ali said. “We were in close pursuit and capturing the powerful bird while it was on the run was next to impossible. Once it slipped, we dropped our bikes on the road and grabbed it by the neck.”

He said that other people wanted to help but were asked to stay away as they did not want the bird to be injured because of poor handling.

An ostrich can sprint up to 43 miles an hour. Its long powerful legs can cover 10-16 feet in a single stride and are formidable weapons that can kill a human and even a lion.

But it is safer to have an ostrich running on the roads of Karachi than lions roaming the streets.

In August 2020, five lions managed to escape from a private farmhouse in Karachi. The lions attacked a pet dog before venturing out and entered a local seminary. Students at the seminary had to flee the building.

The owner of the farmhouse had six lions out of which five escaped. The lions were caught by Sindh Wildlife Department after a few hours.